Home WarZone Worse than Ukraine! In Yemen “Catastrophic” Hunger due to Saudi War, 400,000... 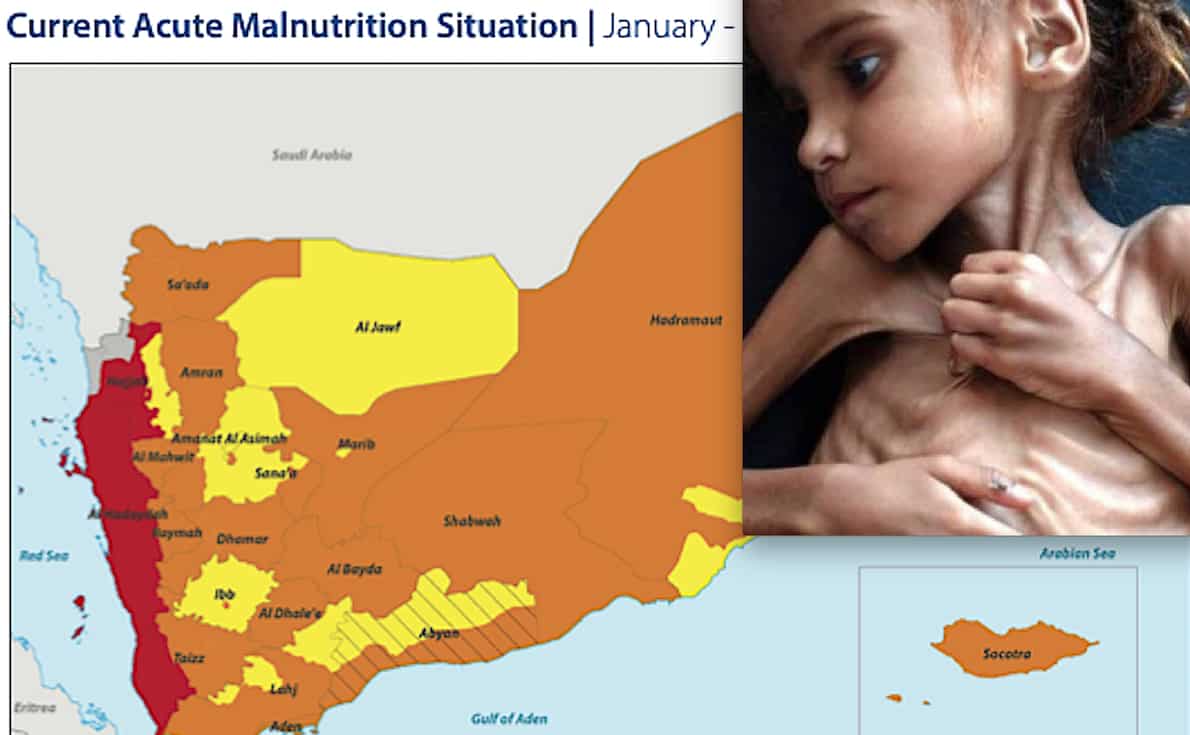 In Ukraine, the first children died under the bombs of the Russians and the Kiev Joint Forces Operation (JFO): which caused a massacre in Donetsk.

The moralistic West of the US, UK, EU and NATO, which for 8 years ignored the approximately 500 children killed in the Donbass by the Nazis of the Azov Battalion, gives lessons in civilization to bad Moscow with burst sanctions that will further compromise the conditions of families poorest in the world.

Meanwhile, in Yemen, people continue to die more from hunger than from bombs.

Chilling the latest report of the Integrated Food Security Phase Classification (ICP) which claims that there are 161,000 people in conditions of extreme hunger and 400,000 malnourished newborns at risk of immediate death.

Paradoxically, the organization which made the report was supported by the same entities that contributed to the 2014 Kiev coup causing the civil war in the Donbass which resulted in the Russian invasion of 24 February 2022.

Five times as many Yemenis are likely to endure famine during the second half of 2022, marking a five-fold increase from the current rate, according to a report by 15 UN agencies and NGOs published on Monday.

The report claimed some 161,000 people were likely to experience “catastrophic levels of hunger,” while 19 million people would likely be unable to meet their minimum food needs during that period. The report continues on to warn that a shocking 2.2 million children could be severely malnourished by the end of the year, including over half a million who already have that condition. Some 1.3 million women are also at risk for malnutrition, it found.

READ MORE: Dozens of children killed or maimed in Yemen since New Year

Those figures show several increases over last year’s numbers, which claimed food rations were needed by 12.9 million, but that 3.3 million children and women needed special nutrition, along with 1.6 million schoolchildren. Another accounting of the humanitarian toll from 2021 suggested there were 11.3 million youths dependent on humanitarian assistance, 2.3 million toddlers “acutely malnourished” and 400,000 of those at “imminent risk of death.”

The statistics are compiled by the Integrated Food Security Phase Classification ahead of a yearly fundraising conference to be held at the UN later in the week. The group itself is funded by the EU, USAID, and UKAID.

The conflict in Yemen has dragged on for nearly a decade, fueled by arms and support the US, UK, and their European partners have supplied to Saudi Arabia, which has been fighting to rout the Iran-backed Houthi rebels and restore the Saudi-backed government in Sana’a. Despite living in the poorest country in the Middle East, the Houthis have still managed to hold on to a significant amount of their territory.

Making matters worse, Yemen imports most of its food, including nearly a third from Ukraine, which is engulfed in its own conflict with Russia since last month and has banned the export of wheat, oats, and other critical food staples, as well as agricultural exports. With food prices already at near-record high levels, the removal of both Ukraine and Russia from the global commodity markets does not bode well for those who usually depend on their wheat – a factor likely contributing as much as Saudi port blockades to the dire situation in Yemen.

The acute food insecurity and malnutrition situation in Yemen has deteriorated further in 2022, with 17.4 million people (IPC Phase 3 and above) in need of assistance as of now, increasing to 19 million starting June to the end of the year. Of greatest concern is the 31,000 people facing extreme hunger levels (IPC Phase 5 Catastrophe) now, rising to 161,000 by June. In addition, approximately 2.2 million children under the age of five, including 538,000 severely malnourished, and about 1.3 million pregnant and lactating women are projected to suffer from acute malnutrition over the course of 2022.

The severity increases dramatically in the projection period for both food insecurity and acute malnutrition, with 86 districts moving to higher IPC Phases, 82 of which move from Phase 3 to Phase 4.

Conflict and economic crisis remain the main drivers of acute food insecurity and malnutrition in Yemen, further exacerbated by the instability of humanitarian assistance. The outlook for 2022 indicates that both features will continue, with a likelihood of further escalation of fighting in critical hotspots, thereby leading to further displacement. In addition, as a result of the protracted conflict, access to public services has been brought to a near-halt resulting in delays/cuts of salaries, poor access to health services, inadequate access to water, and other services such as education, energy, etc. remain severely compromised.

At the household level, primary underlying causes of acute food insecurity and malnutrition include increased food prices amidst reduced incomes and labour opportunities, contributing to poor diet in terms of quantity and quality, as well as low coverage of sanitation facilities and poor hygiene practices, which have led to a high disease burden. As the economic crisis rages, more households are coping through erosion of their livelihoods (such as the sale of productive assets) and the adoption of crisis strategies (mainly a high reliance on assistance). Furthermore, households are increasingly experiencing a vicious debt cycle.

They are taking on higher debt levels every month and maxing out their credit levels to cover basic needs. With such levels of negative coping strategies, many households are precariously exposed, and any sudden shocks at unprecedented levels would further worsen food insecurity and acute malnutrition to extreme levels.

Due to insufficient evidence and unclear population figures, two districts in Hajjah, Midi and Haradh, are not classified. The IPC Technical Working Group (TWG), the Global Support Unit (GSU) and the Famine Review Committee (FRC) advocate for immediate unimpeded access to these areas to conduct an assessment to determine the levels of food and nutrition insecurity.

Note: all links to Gospa News articles have been added by Gospa News editorial staff