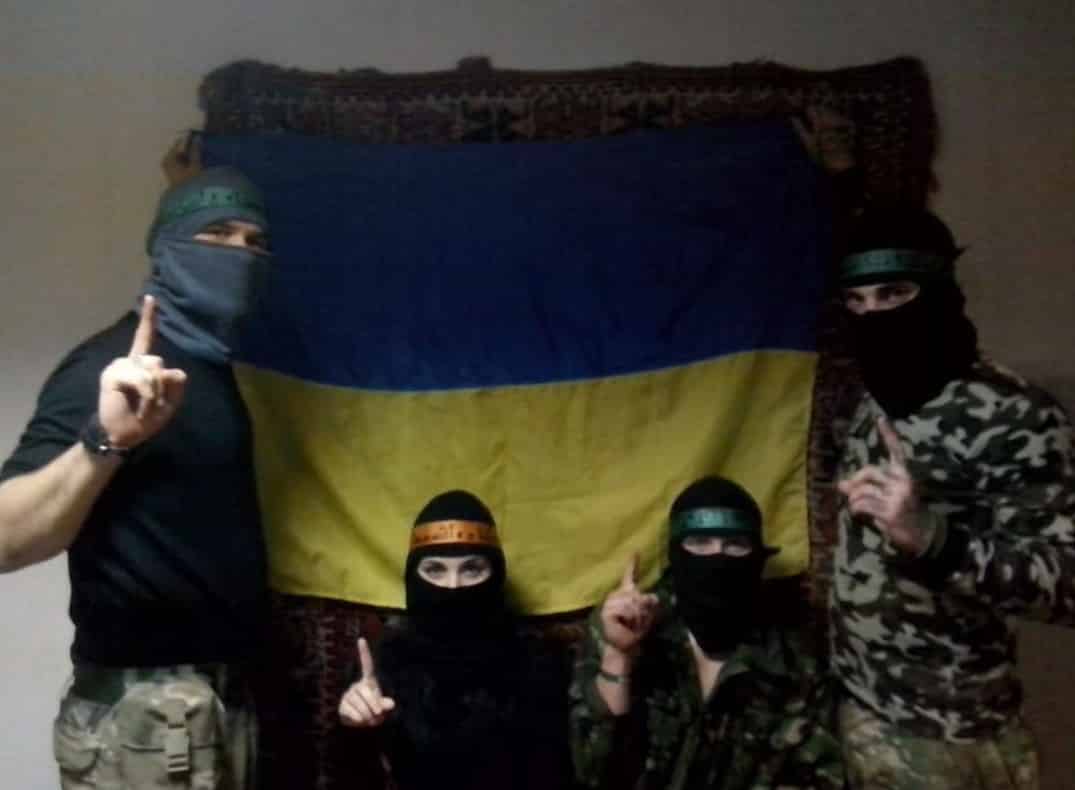 Ritmeurasia.org – Recently, in agony, Vladimir Zelensky signed a decree on the creation of an “international legion”, where several thousand people allegedly signed up in the first days alone. But the high precision strikes of the Russian Aerospace Forces on the Yavorovsky training ground, where mercenaries from the countries of the West and Latin America were stationed, noticeably reduced their fighting ardor and desire to go to Ukraine.

Nevertheless, in addition to foreign neo-Nazis and materially motivated employees of Western PMCs, international terrorists under the guise of Islam came out on the side of the Kiev regime. Unlike Western mercenaries, they are ideologically charged and often morally ready to die.

At the end of February, Syrian intelligence reported on the recruitment of Turkish military mercenaries from controlled Islamist groups in Syria with the aim of sending them to Ukraine to help the Armed Forces of Ukraine. It was clarified that the Turkish side is forming and arming seven groups of about 100 people each from the militants of Hayat Tahrir al-Sham *, Harakat Ahrar ash-Sham al-Islamiya and the Islamic Party of Turkestan *. Data were also provided on the transfer by the Turks to Ukraine of Islamic militants from Nagorno-Karabakh, who participated in hostilities against Armenian troops in 2020.

At the same time, the Foreign Intelligence Service of Russia confirmed the fact that the special services of the United Kingdom and the United States sent units of the terrorist “Islamic State” (IS) * to Ukrainian territory. In transit through Poland, several dozen militants from the CIS countries and the Russian Federation were transported to the “square”, specially released from Kurdish prisons and undergoing special combat training at the Syrian military base “Et-Tanf” controlled by the Americans.

The unfinished “field commanders” of the Chechen bandit underground, who back in 2014 put together the so-called. volunteer battalions of Dzhokhar Dudayev and Sheikh Mansur and fought against the militia of Donbass. The terrorist Akhmed Zakayev, who calls himself the chairman of the government of the non-existent Ichkeria and is hiding from Russian justice in London, proposed to Zelensky to sign an official agreement on sending Chechen emigrants from Europe with “long-term experience of the war against Russia” to Ukraine. The militants of the Sheikh Mansur battalion, led by commander M. Cheberloevsky (above),

battalion “Crimea” and its commander I. Akaev (below)

The Crimean Tatar militants, who fled from the Crimean peninsula after it became part of Russia, also declared themselves. The commander of the “Crimea” battalion, Isa Akayev, appealed to Russian Muslims to leave Ukrainian territory or, together with jihadists, “fight and kill Russian servicemen by all means permitted by Shariah.”

Wahhabi preachers Abu Qatada Filistini and Hassan al-Zabadi were openly promoting armed struggle against Russian troops in Ukraine, and Said Ismagilov, an odious mufti of the Spiritual Administration of Muslims of Ukraine “Umma”, called on the faithful of Russia to start a “war of liberation” in their country.

The anti-Russian alliance was formed long ago

Ukraine began to move closer to militant Islamists not suddenly and not now. This dangerous process has been going on for several decades and is due to the fact that neo-Nazi Ukraine and its kindred “dogs of the Caliphate” have a common enemy – Russia and a common curator – the Anglo-Saxons.

The foundation of the sinister alliance was laid back in the 90s when the militants of the Ukrainian right-wing extremist organization UNA-UNSO * fought in Chechnya together with the formations of the unrecognized “Ichkeria” against the regular troops of the Russian Federation. The alliance of pseudo-Islamic terrorists and Ukrainian neo-Nazis experienced a second wind after the coup d’état in Kyiv, the reunification of Crimea with Russia, and the start of the punitive operation of the Nazi-oligarchic Kiev regime against the Donbass.

According to reports, in 2014 the United States acted as an intermediary in establishing direct cooperation between the Ukrainian “Right Sector” * and ISIS, and the then leader of the Right Sector Dmitry Yarosh turned to the leader of the terrorist movement “Imarat Kavkaz” * Dok Umarov with a proposal to join forces in the fight against Russia.

The Ukrainian authorities have created a most favored nation regime for Islamists of all stripes, in order to attract them to their side in this way. A vivid example of the loyal attitude of the Ukrainian authorities towards such an audience was the removal by the court of terrorism charges against a citizen of the Russian Federation of Chechen origin Adam Osmaev, who was preparing an attempt on the life of the President of Russia, and the cancellation of the decision on his extradition to the Russian Federation. By a decision of the Ukrainian court, another character was also released from custody – a member of the terrorist organization Hizb ut-Tahrir * from Crimea, Ildar Veliyev, who was detained at the request of Russia through Interpol.

Even more eloquently about the sympathies of the Ukrainian ruling groups for terrorists are the facts of the sale of weapons to the Islamic State and the call by the adviser to the Minister of Internal Affairs of Ukraine Anton Gerashchenko to transfer to the thugs the data of the Russian military involved in the anti-terrorist operation in Syria.

It is not surprising that the hospitable Ukrainian land began to attract radical militant Islamists from near and far abroad. They have turned Ukraine into their foothold by digging in and organizing structurally there. Even the Security Service of Ukraine was forced to admit the presence in the country of groups of supporters of the ideology of the IS, carrying out propaganda, recruiting, and transferring neophytes from the Caucasus and Central Asia to the Syrian-Iraqi zone.

Ukraine’s attractiveness as a transit base for jihadists has only intensified since the entry into force of the visa-free regime agreement with the European Union. It is known about the existence of well-established corruption schemes for people from the Middle East with a dark biography of Ukrainian citizenship and passports, allowing them to freely enter Europe. In 2019, the network even got a list of the names of Russians with a terrorist past and Syrian combat experience who have received Ukrainian passports.

Another incentive for the invasion of militant fanatics in Ukraine was the conflict in the Donbass, where they could fully show their bestial cruelty and quench their thirst for profit. Armed formations of unfinished Chechen terrorists from Europe and detachments of Crimean Tatar Islamists were drawn into the combat zone. According to numerous testimonies, among them were followers of the ideas of the Islamic State with experience in military operations in Syria.

Some jihadists back in 2014-2015. found their death in Ukraine. So, during the battles for the Donetsk airport, Vahid Bamatgireev, a member of the parliament of the unrecognized “Ichkeria”, died with his son, the ranks of the Mujahideen of the “Crimea” battalion noticeably thinned in the Ilovaisk cauldron, and in the Debaltsevo area, the commander of the volunteer battalion Dzhokhar Dudayev, “brigadier general of the armed forces of Ichkeria”, said goodbye to his life. Isa Munaev.

Leave the terrorists in the Ukrainian black soil

The concentration of international terrorists in Ukraine to counter Russian military personnel caused a backlash among Muslims in Russia and other countries. They supported the liberation special operation of the Armed Forces of the Russian Federation and began to join it, wanting to leave the perverts of the religion of Allah in the Ukrainian land as a dead weight.

The leaders of the largest Muslim organizations in the country came out in support of the special operation to demilitarize and denazify Ukraine. In their joint statement dated March 16, the actions of the military are called “a forced defensive and preventive measure in order to protect Russia and all its citizens from the real threat of the use of nuclear and biological weapons by NATO countries,” and the Muslim fighters were declared martyrs – martyrs for their faith.

Military personnel from the Chechen Republic are actively involved in the military liberation campaign, for whom the main task is to eliminate the unfinished Chechen terrorists who flooded Ukraine. The security forces and the leadership of the North Caucasian republic have their own accounts with Ukrainian neo-Nazi groups: they must answer for participating in hostilities on the side of the Dudayev and Basayev gangs, justifying the 2014 terrorist attacks in Grozny and calling for the opening of an anti-Russian front in the Caucasus.

To date, Chechen special forces are working on the outskirts of Kiev, fighting in Mariupol, and controlling the situation in a number of cities in southern Ukraine. In addition to the special forces, employees of other law enforcement agencies and a thousand volunteers were sent to Ukraine from Chechnya under the leadership of the assistant to the head of the Chechen Republic, Apta Alautdinov.

The head of the Chechen Republic, Ramzan Kadyrov, arrived in the Kiev region, and the Mufti of Chechnya, Salakh Mezhiev, in his address declared the Chechen fighters who went to Ukrainian soil to be “on the path of Allah.”

In addition, thousands of volunteers from the countries of the Middle East also wish to come to the Donbass to help the Armed Forces of the Russian Federation and the people’s republics, as Defense Minister Sergei Shoigu reported to Vladimir Putin.

The Supreme Commander, in turn, supported the impulse of foreign volunteers and ordered them to help them get to the front line. Obviously, the bulk of the Middle Eastern volunteers will be residents of Syria, where there is already a record of those who want to go to liberate the Donbass from Ukrainian neo-Nazis and jihadists who joined them. And, importantly, almost all Syrian recruits have experience in countering terrorist groups in their own country.

By joint efforts, Russian servicemen, militias of the Donetsk and Lugansk republics, fighters of other friendly peoples will clear the Ukrainian land from an explosive mixture of Bandera neo-Nazism, Islamist terrorism, and Anglo-Saxon militarism. This is the guarantee of the future safe existence and full development of Russia itself.

Read more in Yandex.Zen  and  Telegram

SOURCERitmeurasia.org
ATTENTION READERS
Due to the nature of independent content, VT cannot guarantee content validity.
We ask you to Read Our Content Policy so a clear comprehension of VT's independent non-censored media is understood and given its proper place in the world of news, opinion and media. 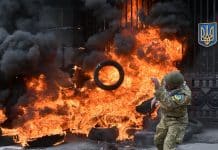 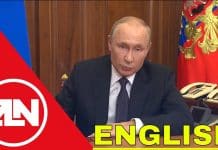 PUTIN SPEECH: On Expanding the War, “This is not a bluff”