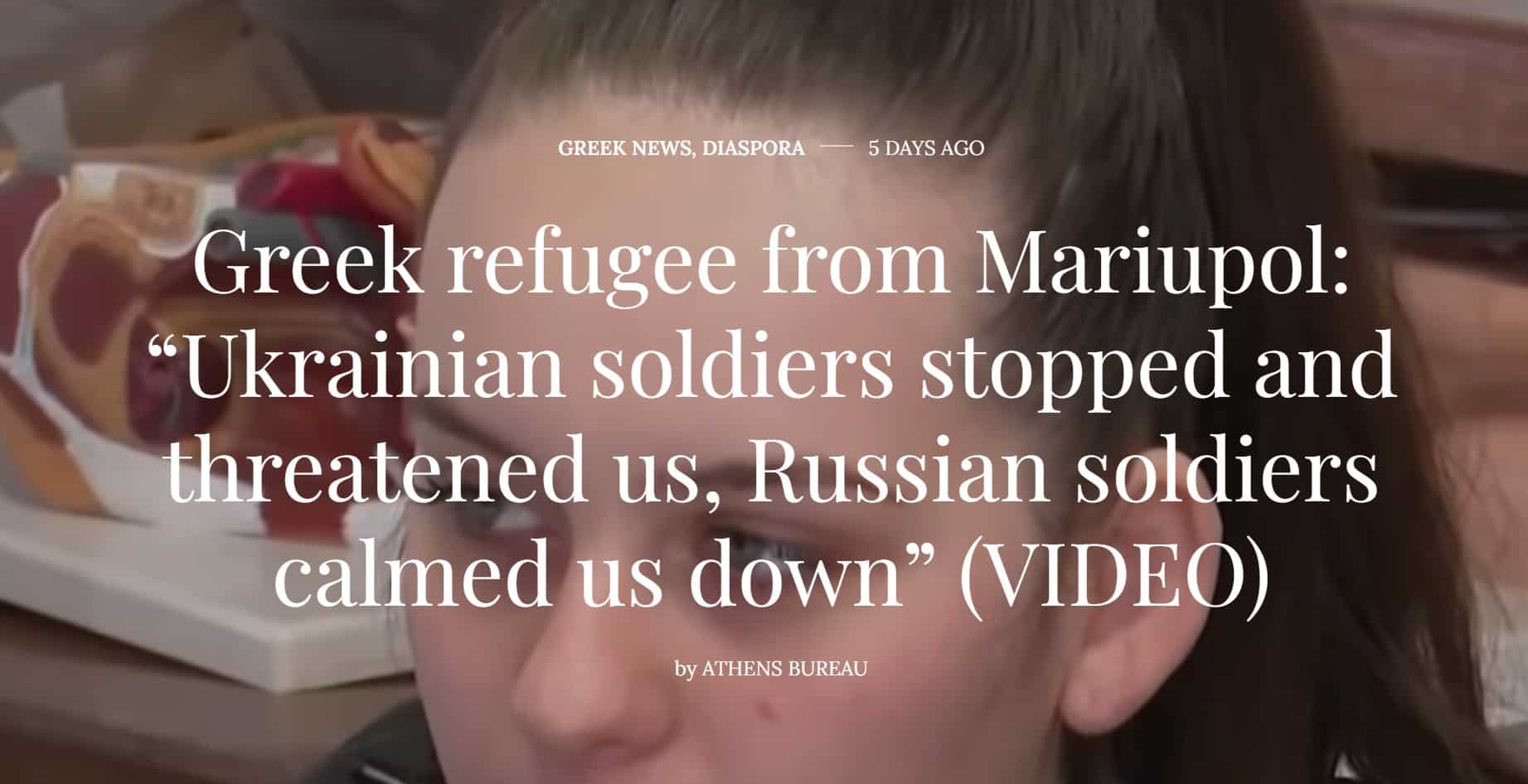 The shocking moments that were experienced when escaping the horror of the war were described by ethnic Greeks originally from Sartana on the outskirts of Mariupol in Eastern Ukraine.

The refugees from Sartana have been in hosting facilities of the Municipality of Zografou in Athens for a week now and their children have already started school.

“#Azov…shot up two buses…full of children…they said: “In war, there’re no children.”

In speaking about their escape from Mariupol through a corridor, one refugee speaking in Greek with a distinguishable Ukrainian accent said to OPEN TV: “I remember when leaving Mariupol, Ukrainian soldiers stopped us and threatened us.”

“Russian soldiers in tanks were trying to calm us down after all of that,” she added.

Chilling video of the neo-Nazi Azov Battalion (who the US has been arming and funding for 8 years) holding civilians hostage. This comes amid refugees escaping to Russia recounting how Ukrainian militants have threatened and shot people for refusing to serve as human shields. pic.twitter.com/vHQ1ed2VJn

Elsewhere in the same segment, a teacher described the harrowing experience of driving with the convoy traveling through explosions and a warzone.

Another Greek refugee said in Russian: “I feel safer [in Greece] than in Ukraine, but it’s hard because it’s another country, other people.”

Mariupol. VERY complicated. Chechens advancing from the east. They are the anti-neo-Nazi shock troops.

The woman’s account of being attacked by the Ukrainian military matches that of another ethnic Greek from Mariupol who said he could not escape the besieged city because he would be killed by the neo-Nazi Azov battalion.

In late February, with Russian forces besieging Mariupol, in which 120,000+ ethnic Greeks live in and its surrounding villages including Sartana, SKAI News spoke with Mr. Kiouranas who lives in the city and described the Ukrainian “fascists.”

There were rumors about Azov fighters fleeing Mariupol disguised as refugees, so civilians leaving the city are being checked for Nazi tattoos. Not a good time to be a guy who is just into Germanic runes as a hobby pic.twitter.com/eD2F3ENutd

When asked by SKAI news if he planned to leave the city, Kiouranas responded “how can I leave? When you try to leave you run the risk of running into a patrol of the Ukrainian fascists, the Azov Battalion.”

“They would kill me and are responsible for everything,” he added.

"Motherfucking #Azov!
Boys, kill them all,
Kill each one of them!"

Earlier this month, a correspondent for Russian media asked a civilian “Can you, as Sartana’s Greeks, say something to your compatriots in Greece?”

The Greeks of Sartana responded: “Nobody kills anyone here. The Russians do not kill anyone. No one is shooting at civilians here.

MARIUPOL THEATER BOMBING
A Mariupol refugee said the Azov Battalion (neo-Nazis) blew up the city drama theater while retreating where civilians were used as “human shields”.

“As soon as the Russians came here, they immediately brought us help. Right now, immediately after the shootings stopped.

“Now no one asks us if you are Ukrainian or Greek, about your origin, what language you speak. The Russians do not discriminate.

“While the Ukrainians did, they forced us to speak only Ukrainian, although I do not know it at all.”

News of Crimea meets refugees from #Mariupol.
"We were like cannon fodder! 85% of the damage to the city was caused by the Azov people" pic.twitter.com/2tEkgFwRet

The Mariupol-based Azov Battalion, a neo-Nazi unit of the Ukrainian Republican Guard, which falls under the command of the Interior Ministry, was based in Mariupol and discriminated, persecuted and tortured non-Ukrainian speakers, including Greeks.

Only days before Russian troops started crossing into Ukraine, the Azov Battalion killed an ethnic Greek and shot another two only for speaking Russian.

“In Shyrokyne, a key location in the ‘grey zone’ between the Government-controlled city of Mariupol and the town of Novoazovsk controlled by the armed groups, OHCHR documented extensive use of civilian buildings and locations by the Ukrainian military and the Azov regiment, and looting of civilian property, leading to displacement.”

The UN in another report found that when compared to the previous period, there was a 51% increase in Donbass (areas controlled by Russian-backed separatists in eastern Ukraine) casualties between February 1 and July 31 2021.

This accounted for 62 killed and wounded civilians. 81% of civilians died from Ukrainian shelling, including from the Azov Battalion.

READ MORE: Greek soldier in Russian Army: “I requested deployment in Mariupol, I defend my great and small mother nations.”

Elsewhere, Sergiy Orlov, the deputy mayor of Mariupol, said 80-90% of the city had been destroyed by shelling and that people were “drinking water from puddles”.

“For 11 days we’ve been trying to deliver humanitarian aid,” Orlov said. “Our last humanitarian column has been on the road for four days, and Russians don’t let it go into Mariupol.

“There are buses. We are ready to evacuate 3,000 people a day. They’re not letting us.

“What’s the solution? Give us a chance to bring humanitarian aid and evacuate everyone who wants to leave. We are ready to do it. They are not ready to give it to us.”

Residents who have managed to escape said the most critical situation was to the west of the river that divides the city.

There is no food no water, people are completely cut off from civilization,” one man said. “They have no chance to be evacuated to Berdyansk,” a nearby village that displaced people are trying to reach