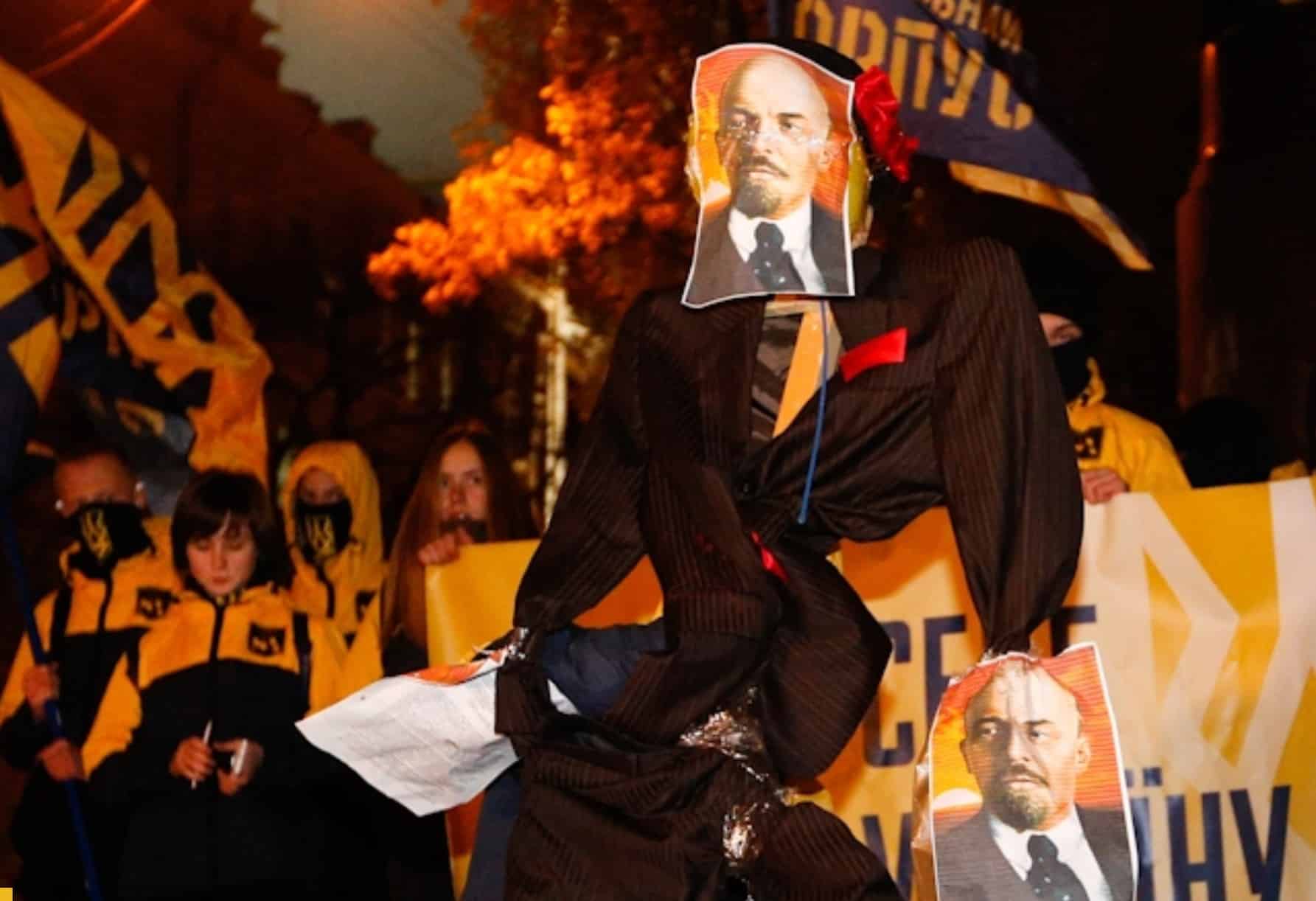 KIEV, UKRAINE – Western media have attempted to all but deny the existence of neo-Nazis in Ukraine, alleging that Russia’s goal to de-Nazify Kiev is not possible because Ukraine’s president is Jewish. But what is to be made of an Israeli Jew openly calling himself the co-founder of the neo-Nazi Azov Battalion?

Kiev’s infamous Azov Battalion, officially part of the National Guard of Ukraine, has been widely acknowledged as a neo-Nazi volunteer paramilitary force. It has also been connected with foreign white supremacist organizations. In addition to this, the far-right, neo-Nazi and white-nationalist members in its ranks have even been criticized by the likes of Human Rights Watch and the United Nations for human rights abuses.

Despite the well-documented history of racially motivated crimes and attacks on Ukraine’s LGBTQ+ community, the battalion has been indirectly and continually armed by Western powers. In June 2015 the United States and Canada banned the support and/or training of Azov by their forces, specifically citing its neo-Nazi connections. However, the following year the U.S. lifted its ban owing to pressure from the Pentagon. In 2019, The Nation magazine published an article in which it was stated that “[p]ost-Maidan Ukraine is the world’s only nation to have a neo-Nazi formation in its armed forces.” All of which is to say that Azov can conclusively be labeled neo-Nazi. This may be why reports are now emerging of White Supremacists and far-Right militia members flocking to Ukraine, to fight alongside extremist forces in the country.

Israeli support of and involvement in the Azov Battalion

Prior to Azov becoming an integrated part of the Ukrainian military, the group was funded primarily by Ukrainian oligarchs, the most well known of whom was Igor Kolomoisky. Kolomoisky is of Jewish heritage and is an Israeli citizen and well-known billionaire businessman. Despite his being a Jewish Israeli, he had no problem pouring money into neo-Nazi volunteer militias such as the Azov and Aidar, among other far-right groups that feature elements hostile to Jewish people.

Although the Jewish president of Ukraine, Volodymyr Zelenskyy, is often held up by mainstream Western media as proof that there is no problem with neo-Nazis in Ukraine, he himself received financial backing from the same oligarch – Igor Kolomoisky – who was financing neo-Nazis. Zelenskyy’s presidential bid in 2019, which saw him win 73% of the vote, was successful on the basis that he was running in order to combat corruption and create peace in the country but, as the leaked documents known as the Pandora Papers revealed, he himself was storing funds in offshore bank accounts. Zelenskyy’s campaign was at the time boosted and bankrolled by the Israeli-Ukrainian-Cypriot billionaire Kolomoisky – who was himself accused of stealing $5.5 billion from his own bank.

The nerve of it . The BBC’s first response to my formal complaint about their failure to report the presence of neo-Nazis, in a news item about Ukraine. pic.twitter.com/kl88gR5sY0

It may come as a shock, but there are actually many Israeli Jews who fight with ultra-nationalist Ukrainian groups and who coordinate closely with, or even belong to, neo-Nazi groups such as Azov. Konstantyn Batozsky, for example, who stated that he worked as a political consultant in Donetsk for the Azov Battalion between 2014-15, even defended Azov members who had tattoos of Nazi symbols.

“They were soccer hooligans and wanted attention, so yeah, I was shocked when I saw guys with swastika tattoos,” Batozsky said of Azov Battalion members he personally got to know. He then followed that statement by saying. “But I talked with them all the time about being Jewish and they had nothing negative to say. They had no anti-Jewish ideology.” Another Jewish Israeli, Daniel Kovzhun, claims that “there were Orthodox Jews in Azov,” which he claims came down to all members being Ukrainian nationalists and therefore Jewishness was not an issue.

Muslims however, seem to be a major issue for the Azov Battalion. The Islamophobia present not only in Azov, but also in the National Guard of Ukraine, came through strongly on social media as the official National Guard site glorified the Azov Battalion as they dipped their bullets in pig fat. The video was directed at Muslim soldiers from Chechnya who are fighting on the side of Russia and were described as “orcs” by the National Guard on Twitter. In the video, one of the Azov fighters can be heard saying: “Dear Muslim brothers, in our country, you will not go to heaven.” It is a belief shared by some white supremacists that if they kill a Muslim with a bullet coated in pig fat, the Muslim will not enter heaven.

Although little is published about this fact in English, according to the BBC, an Israeli-Ukrainian named Natan Khazin claims to have co-founded the Azov Battalion. In an interview conducted by BBC Ukraine in 2018, which attempted to downplay the claims of rising antisemitism in Ukraine, Khazin is quoted as saying: “I can say that, despite the difficult situation in Ukraine and the war, the level of antisemitism is not growing. Someone in the West simply does not understand the real state of things in Ukraine in this area.”

In The Forward, a Jewish news outlet, Khazin is described as a “yarmulke-wearing … veteran of the Israel Defense Forces and an ordained rabbi.” The description continues:

[He is] representative of many young Ukrainian Jews who are Zionist, religiously observant and at the same time strong Ukrainian patriots. Some of them refer to themselves humorously as Zhido-Banderists — a fusion of the pejorative term for “Jew” with the name Stepan Bandera, leader of the Organization of Ukrainian Nationalists, which fought for Ukrainian independence during World War II. The organization’s forces also participated in the massacre of Jews, so the term Zhido-Banderist is self-consciously ironic.”

During an interview, published in a condensed form by The Forward, Khazin is asked, “If it isn’t confidential, where did you serve [while  in the Israeli military]?” He answers:  “In the Gaza Strip. I know what it’s like to move down a street with people shooting, throwing stones or burning objects.”

All the above examples of Israelis actively collaborating with known neo-Nazi groups in Ukraine are of private Israeli citizens and there is no direct connection to the Israeli government. However, the Israeli government itself seems to have participated, much like the United States and other NATO nations, in supplying weapons to the Ukrainian military, which is considered by some as a form of indirectly arming the Azov Battalion and other ultra-right elements. In 2018, more than 40 human rights activists filed a petition with the Israeli High Court, in which they argued that the Israeli weapons were being sent to serve those who espouse neo-Nazi beliefs. They cited “evidence that the right-wing Azov militia, whose members are part of Ukraine’s armed forces, and are supported by the country’s ministry of internal affairs,” were using the weapons, according to a report published in Haaretz.

Although there is no concrete evidence of a direct Israeli government link with the Azov Battalion or other neo-Nazi groups in Ukraine, there are clearly Israeli citizens who are directly aiding them. There are, however, reports that claim that Israeli forces have directly trained the Azov Battalion and Azov has been shown to possess Israeli-made weapons. When such a connection between neo-Nazi groups and Israeli Jews in Ukraine clearly exists, this in of itself should call into question the sincerity of Western media’s attempt to use President Zelenskyy’s Jewish identity in order to push to the side claims that there are hardline neo-Nazi elements inside Ukraine. Furthermore, these groups are clearly able to coexist beside Israeli citizens, so long as those Jewish Israelis are themselves Ukrainian nationalists. This is not to say that anti-Semitism does not exist in these groups, however.

For some reason, the extreme and very dangerous anti-Semitism in Ukraine (which has a very ugly history) gets little attention in the west. Wonder why:https://t.co/lfQHrg0IES

The propensity for right-wing Israelis to align themselves with right-wing Europeans has long been clear, and this propensity has even meant allying themselves with groups accused of antisemitism. The Alternative für Deutschland (AfD) – a right wing German party condemned by World Jewish Congress President Ronald Lauder as being “a disgrace for Germany,” and frequently accused of antisemitism – has strong links to Israel. Interestly, figures regarded as being from the far-right – such as Geert Wilders in the Netherlands, France’s Marine Le Pen, Britain’s Nigel Farage, and Hungary’s Viktor Orbán – are all on record as being pro-Israeli and have made efforts to align themselves with the Jewish State. Former Israeli Prime Minister Benjamin Netanyahu also made it clear that he would meet and align himself with figures accused of antisemitism, such as Orbán.

Netanyahu tried hard to cement Israel’s alliance with the Visegrad bloc — Poland, Hungary, Slovakia, and the Czech Republic — which Foreign Policy magazine described as forming “a common entity imbued with hostility to the values of the Enlightenment, to human rights, to the concept of a nation as a community of citizens, to the principle of equality, and, generally speaking, to foreigners.” Of course, when it comes to Israeli government endeavors, there is a pragmatic incentive for Israel, and such alliances with the far-right should not be taken as a purely love-bond relationship. But the fact that these relationships have existed, and continue to exist, should indicate that right-wing Israelis can readily coexist with the European far-right.

As for white supremacists in the United States, there are many who openly align themselves with Israel. One such example is White Nationalist leader Richard Spencer, who is an open supporter of Israel and came out in 2018 to back Israel’s Nation State Bill, which affirmed that  “the realization of the right to national self-determination in Israel is unique to the Jewish people.” The bill was widely pegged as racist and Spencer said of it that he has “great admiration for Israel’s Nation-State Law. Jews are, once again, at the vanguard, rethinking politics and sovereignty for the future, showing a path forward for Europeans.” Israel’s system of racial supremacy is viewed with great admiration by many white supremacists, who seek to model their own system along similar lines, according to people like Richard Spencer. This sort of mentality, which aligns Israel and the Western far-right, cannot simply be ignored and demonstrates why it is not necessarily a valid point to say that the presence of Jewish individuals in Ukraine’s fight against Russia debunks the claims of neo-Nazi elements existing. As is demonstrated above, these groups not only exist in spite of Jewish individuals being present, but in some cases even feature Israeli Jews in their ranks.

Robert Inlakesh is a political analyst, journalist and documentary filmmaker currently based in London, UK. He has reported from and lived in the occupied Palestinian territories and hosts the show ‘Palestine Files’. Director of ‘Steal of the Century: Trump’s Palestine-Israel Catastrophe’. Follow him on Twitter @falasteen47