I begin with a quote from last week’s column:

The creation of NATO and Zionist Israel has made practically every conflict in the world America’s business, when the fact is, the vast, vast majority of these foreign conflicts are NONE OF OUR BUSINESS. The only thing American involvement in any of these conflicts does is to make them WORSE.

Let me ask you, what country has 800 military bases in 160 different countries? Russia? China? Iran? North Korea? No! The United States.

What country has dropped more bombs on more countries (including Iraq, Afghanistan, Syria, Libya, Pakistan, Yemen, and Somalia) and killed more people (an estimated six million since the inception of G.W. Bush’s War on Terror in 2001—most of them innocents) than any nation on earth? The United States.

And for your information, Donald Trump dropped over 100,000 bombs and missiles during his four years in office, which was more than Barack Obama dropped in his entire two terms (eight years) in office. What is that again about Trump being a “peace” president?

During the twenty-first century, what country has attacked or invaded more countries than any other nation on earth, attacks and invasions that include Afghanistan, Yemen, Macedonia, Colombia, Pakistan, Syria, Uganda, Mali, Niger, and Iraq? The United States.

What country uses NATO and Israel as proxy armies for the purpose (among others) of enlisting terror groups (including ISIS) to effect regime changes, political assassinations and clandestine military incursions into other countries? The United States. 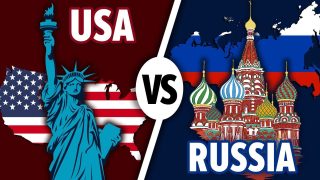 How convenient for Joe Biden (who is more of a communist than Vladimir Putin) to use the conflict in Ukraine as the reason for our massive inflation—including obscene prices at the gas pump—in order to try and mask the fact that America’s hyperinflation has NOTHING to do with Russia but EVERYTHING to do with America’s own nefarious Big Government deficit spending habits, which escalated to gargantuan levels under the pretense of fighting Covid.

And now that the Covid fraud is dying out, the “war” in Ukraine gives the Big Government elite inside the Beltway the opportunity to continue their Big Spending habits with perpetual impunity. It’s not their fault, you see. It’s Russia’s fault.

My friend and former running mate Darrell Castle have an excellent summary of Western culpability in Russia’s conflict with Ukraine. I urge you to read it.

Darrell’s report is additional evidence that NATO is indeed The Firefighter-Arsonist:

The French have a wonderful term: the firefighter-arsonist. It’s used to describe a person or entity that lights a match and creates a firestorm, only to subsequently rush and put out the flames to heroic applause and accolades. At this stage of the conflict in Ukraine, it’s hard to imagine a better term for NATO.

There’s currently a concerted effort underway within the transatlantic alliance to portray the conflict in Ukraine as a Russia-Ukraine standoff unrelated to NATO. Except that the US-led West, of which NATO is key pillar, was largely responsible for not only the ignition of the conflict, but also for amassing the tinder in the form of “foreign aid” to civil society groups known for mobilizing public opinion against Russia, for delivering weapons, for ear-bending public officials with promises of NATO or European Union integration, and for its clandestine training of anti-Russian neo-Nazi proxy fighters. The Canadian military is currently investigating how on earth its personnel allegedly became involved in the last of those endeavors, despite being warned as early as 2015 before the training operation began.

The West’s insistence on playing with matches around a tinderbox has already led to an unwelcome backdraft for citizens everywhere, including their own. Here’s hoping they can pass quickly to the firehose sequence by toning down their belligerence and genuinely attempting to secure peace.

Honest peace-loving men from both East and West should be able to see the wisdom of this common-sense appeal. Surely, there are at least a few such men left. If not, we are all toast.

And speaking of the “war” in Ukraine, here is an on-site video report regarding the much-fabricated narrative coming out of Kiev (pronounced “Keev,” according to Joe Biden). Here is a brief summary of what is in the 15-minute video report:

The reporter shows Ukrainian film crews and their equipment and how they set up for staging chaos, such as blocking most of the doors at train stations so people have to funnel into a door or two, making it look like more people than there are.

He couldn’t get a room at a hotel, not because the refugees are in them, but because the Ukrainian film crews are filling them up. Although the media claims there is war in the streets of Kiev, he walks through town, and it’s like a ghost town. There is no evidence of war. Other videos show Ukrainians walking around in different places doing their day-to-day normal things: People walking their dogs, filling up at gas stations, etc.

At the 7:15 timestamp, he shows “the illusion of war tactics,” with everyone shut in after curfew, air raid sirens blaring (no explosions or bullets). He explains that Kiev is a movie set. And he shows video and pictures of abandoned cars and blockades (props) placed around town by visual effects teams.

He shows grocery stores full of food. He shows the outside of a hospital that is 30-minutes from Kiev. There are no sounds of war heard and no wounded soldiers. Not much activity around the hospital at all. He saw no signs of war activity whatsoever.

In the video report, he reminds people of the BBC’s and other networks’ reporting of fighting and bombings in Kiev and shows a clip of one of those reports. He was in Kiev a few days following the BBC report and saw no evidence of fighting. He said they were all crisis actors. He also said Ukrainian armed agents attempt to keep anyone from using their phones to record anything going on—or not going on—in the country.

Here is another report showing the fabrication of the war narrative in Ukraine.

In any conflict there are casualties—innocent casualties. And I’m sure that’s true in Ukraine. However, the last report cited above notes the duplicity of the Ukrainian government in implicating Russia in casualties that Ukraine itself caused. Corrupt governments in history—including Russia’s—have had no hesitation in killing their own people when it suited their political or public relations priorities. Ukraine is no different.

The thing that ticks me off to no end is how Americans—especially Christians—are feigning deep compassion for the innocent victims in Ukraine (who deserve our compassion) but haven’t cared a rat’s hind end about the five-plus million innocent Palestinians who have been beaten, raped, dismembered, tortured, starved and murdered by the apartheid State of Israel over the past seventy-plus years or the millions of innocents that American bombs, missiles and drones have killed over the past twenty years.

And I’m not sure I accept all of the above report’s analysis of Mr. Putin—the man—although with all of the phony narrative being disseminated right now about Putin and Russia, it’s hard to know exactly what is true and what is not. But when a globalist monster like Klaus Schwab cuts all relations with Russia and kicks Putin out of his demonic World Economic Forum, the man can’t be all bad.

Once again, the American people are being played by The Firefighter-Arsonist.