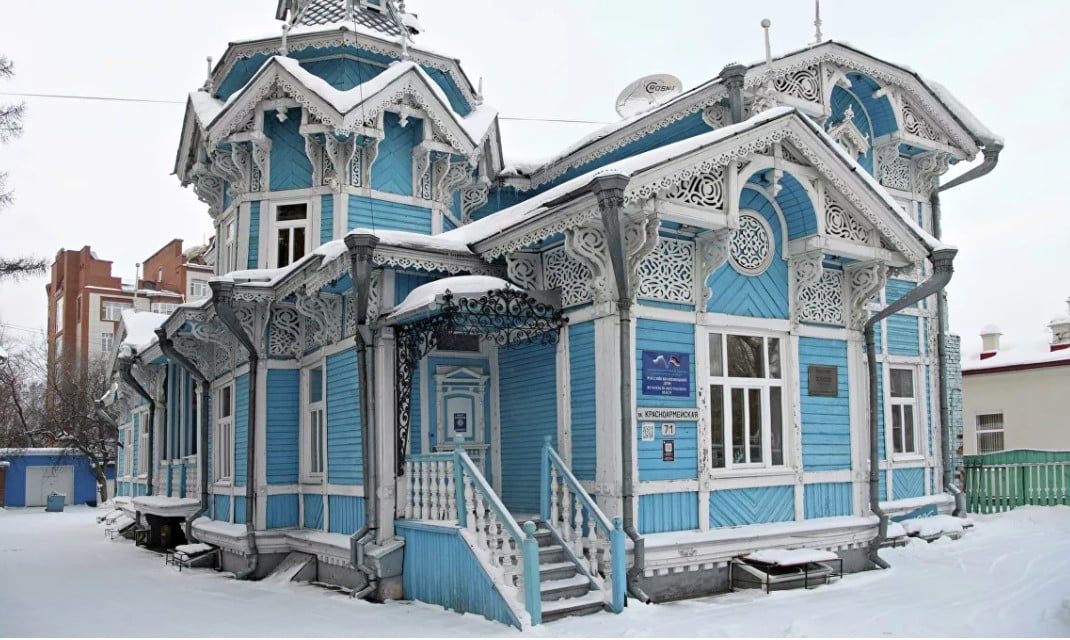 All the beauty of vast Russia is in the photo project #DiscoveringRussia. The diversity of natural landscapes, the diversity of cultures, languages, the beauty, and uniqueness of every corner of the boundless country. Far East, Siberia, Urals, Caucasus, Altai, Central Russia, Crimea. Project of the International Information Agency “Russia Today”.

Four hours of flight from Moscow – and you find yourself in a little-known world, in the Asian part of Russia. Over the course of its 400-year history, this small town has been both a fortress, the capital of the province, and a major trading hub, and now it has become the educational and cultural center of Siberia.

The image of a horse, souvenir-painted horses are at almost every step. At one time, Tomsk was called the city of cabbies. He was famous for his horse breeders. Thoroughbred strong horses were bred here, races were arranged at the hippodrome. Since the second half of the 18th century, a horse has been on the city coat of arms. Siberians perceive windows as a talisman at home. Entire legends and tales are carved on the architraves – you can look at them for hours. For example, the firebirds on the roof of the mansion, built by the order of the merchant Leonty Zhelyabo for the wedding of his daughter, are an image of harmony and love.
“Secrets of Tomsk windows” is another route for tourists, and it runs through the compact historical center: along Herzen, Kartashov, Kuznetsov, Belinsky and Krasnoarmeyskaya streets.
Don’t miss the carved mansion from 1904, which is considered the prototype of the castle from the fairy tale “The Wizard of the Emerald City”. Its author, Alexander Volkov, studied in Tomsk.
For many decades, this city has been called the center of education in Siberia, and the brand of the student capital of Russia has been assigned to it. Tomsk State University (TSU) was founded in 1878 by the decree of Emperor Alexander II, it was the first university in Siberia.
TSU is a leader in the leading world and Russian rankings. If desired, each tourist can get on the tour, but you need to pre-register.

There are many hotels in Tomsk, and for any budget. To plunge into the past, it is better to settle in one of the old mansions. For example, “Merchant’s House” or “Abazhure”. Or in the new hotel “Kukhterin”, named after the legendary merchant Evgraf Kukhterin.

There will be no problems with cafes and restaurants. As in any modern city – Russian, Asian and European cuisine. Local, Siberian is becoming more and more widespread. Venison, elk or bear cutlets, stroganina, northern berry sauces can be tasted in the cozy restaurant “Kukhterin” or “Stroganina-bar”. And in the cafe “Coffee Territory” it is worth having breakfast.
In the gallery with a collection of minerals, excursions are conducted by the hostess herself – Svetlana Pavskaya. It is difficult to resist not buying designer souvenirs and jewelry there. Siberian Health
They say about Siberians – brave, courageous, cheerful. In just a couple of hours, a whole team of Tomsk walruses gathered and met us at the hole in the lake. Winter bathing here is joined at different ages: hardening is a common thing. Eco-tourism is also being actively developed in Tomsk. Not far from the regional center there is a “dancing forest” where forest bathing is organized. People come there to breathe fresh air filled with a thick cedar aroma, to arrange a real reboot for themselves.
The cafe-shop of the eco-factory has a wide selection of confectionery products: high-quality chocolate with the addition of berries and nuts, jam, herbal tea, honey and cedar oil, sweets, marshmallows, marmalade and urbech, roasted meat. And if you are already here, order a cup of specialty coffee with Siberian herbs. Miracles in the theater
Fairytale stories with philosophical meaning are told in the unusual Tomsk theater “2+ku”. Its uniqueness is felt in everything. The building itself is not easy to find, it seems to be hiding in the alleys, but from the outside and inside it looks absolutely fabulous. Guests will be shown magical stories, given tea with sweets and pies. The dolls are truly alive. Actors perform with them because the main characters fit in the palm of their hands. They are called so: dolls on the wrists because they are attached to the hand and fingers.
The tiny “artist” starts a conversation, closes his eyes, as if thinking, waving his arms, and answering questions. Actress Olga Sigal with the hero of fairy tales Hedgehog in the theater “2+ku”
Chekhov did not like it, but Tomsk was not offended
Tomsk is a creative city in general. The works of the local artist and sculptor Leonty Usov were exhibited in 12 capitals of the world: from America to Australia.
“This city inspires, it is absolutely amazing. Whoever comes here, everyone feels its peculiarity. Professors have been living here for generations. This is a city-university,” says the master.
One of the most famous sculptures of Tomsk by Usov stands on the embankment of the Tom River. The idea of ​​a monument to Chekhov arose by chance.
“It turned out that the Russian writer lived in our city for a whole week. And he didn’t like it here: the trip didn’t work out. He came here as a correspondent for a private newspaper in a spring carriage, it broke down. annoyed, he wrote: “Tomsk is a drunken city.” And I thought: “How did the drunken city itself see the writer?” Leonty Usov shares.
His sculpture has already become a brand of Tomsk: paintings depicting a bronze classic with an umbrella are available in all stores.
There are many good souvenirs here. For example, traditional painted horses were made by local craftsmen. Or postcards depicting masterpieces of wooden architecture and especially recognizable windows with an indispensable pot of geraniums and a cat. In addition – T-shirts, potholders, aprons, eco-bags, mugs, tea pairs with the symbols of the city.
Thank you for your help in preparing the material TIC Tomsk and the Information Policy Department of TSU.