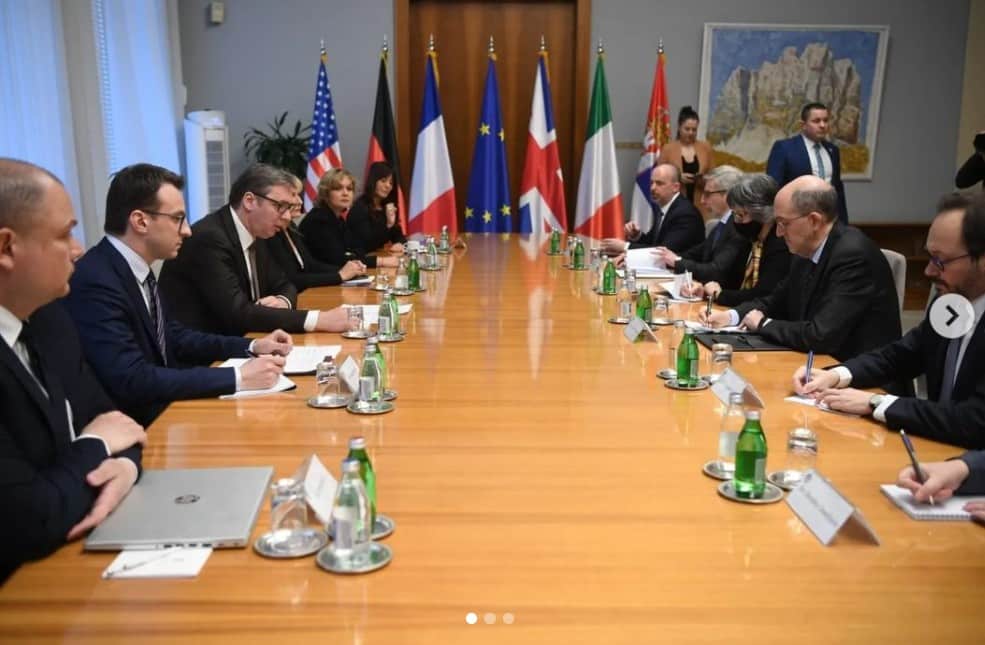 Aleksandar Vucic? Then the coordinator for Europe?

by Predrag Dokovic for VT Belgrade

Kurir.rs – Meetings of the President of Serbia with the ambassadors of the fifth countries, which are the leading NATO countries in Europe, have become very striking! The day before the NATO session, in the middle of the beginning of the Z Operation of Russia on the territory of DNR and LNR and Ukraine, members of the fifth countries were in Belgrade for consultations. The fifth marks the number 4, and we see that special envoys, the so-called ambassadors of the following countries, are taking part in the consultations:

Okay, we can assume that the United States and Britain are one country, that’s the fifth, number 4. 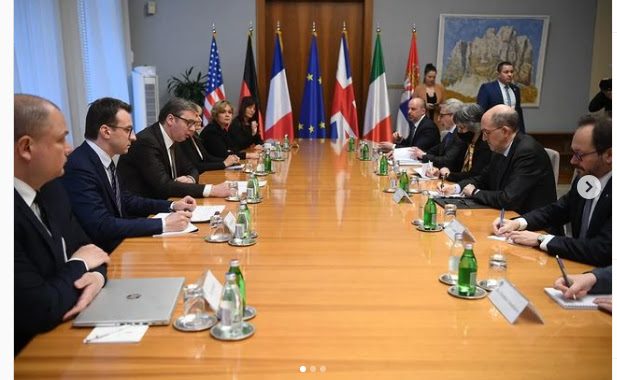 NATO’s policy towards Russia is obviously based on Belgrade, based on consultations with Aleksandar Vučić, who tonight, March 23, 2022, the day of the bombing of Yugoslavia in 1999, when he became the owner of a three-room apartment in Belgrade, left the National Security Council and went to an emergency meeting. with the ambassadors of the fifth country.

Reportedly, problems are happening with the Kosovo government’s ban on banning the April 4th elections. on the territory of Kosovo. Nobody in Serbia sees any reason why these elections would be held, because it is obvious that Serbs are losing all positions day after day.

In September, during the escalation of violence and the demonstration of force by the Serbian Army, politicians from Kosovo announced that they would step down if the Union of Serbian Municipalities, which was “agreed” in Brussels at the Serbia-Kosovo negotiations, was not proclaimed by the New Year 2022. legitimate heirs of KLA terrorists.

In a few days, April 2022, not a word is mentioned about the Community. Due to Russia’s operation, everything has been raised to the level of Bosnia’s accession to the EU as soon as possible, and NATO is obligatory because joining the EU cannot be without joining NATO. The politicians of the Republika Srpska have obviously taken a lot of money for such a course, which is dragging the Republika Srpska into the EU and NATO. It is simply obvious that there is no policy of Serbia led by the “state leadership”, which will result in a different outcome than the one I determined. Joining NATO and the European Union.

Therefore, Kosovo, as a base for the peaceful coexistence of Serbs and Albanians, is also part of the European agenda, so Aleksandar Vučić is introducing Bosnia and Kosovo with accelerated steps into NATO and the European Union. His policy of peace and silence is in fact a pro-Albanian policy, which he has shown in action by saying that there will be wheat for Albania as well, but also all others if a wartime economic crisis breaks out. The Alans in Kosovo adopt him and let’s not forget Ljubišđa Petković and the book of the Serbian Radical Party “Hague Torture” in which he claims that Aleksandar is actually Albanian, as well as that all Vučićs were Catholics and that there were no Vučićs killed in Jasenovac. Aleksandar Vučić himself, whose works are not great if you put everything on a plate, said that if it were not for Hitler’s collaborator Nedić who helped his grandfather cross the Sava, he would not be alive today.

This, noting that Serbia is not ruled by Serbs, but by Croats and hidden Albanians (Jadranka Seselj-Albanian from Podujevo, former Serbian presidential candidate, son representative to the Council of Europe) only further confirms the thesis that Belgrade is a Nazi capital that secretly works with NATO. pact and spying on Russia exploit Serbs as slaves for German slave-owning companies that received millions of free per diems during World War II, exploits Kosovo as a place to launder money, to transport narcotics through Serbia (The Patrons a person related to the party of Aleksandar Vulin, who as an unemployed person spent 30,000 euros on roulette during one day). Aleksandar Vulin’s brother was arrested for smuggling kilograms of heroin from Kosovo, moving towards the territory of Belgrade in a state car …

With all this, as well as many other data from history, it is completely clear that Serbia and Kosovo, read Albanians, must participate in the creation of the European Security Agenda. Here, Ukraine is especially respected because the upcoming Third Ukrainian Front opened the way for the entry of Ustashas disguised in partisan uniforms who executed Serbs after the liberation of Belgrade and Serbia.

The mystification that surrounded Belgrade and Serbia is very stubborn, but in time it will have to start firing when the time comes to decide. Where is who and who is who…

SOURCEKurir.rs
ATTENTION READERS
Due to the nature of independent content, VT cannot guarantee content validity.
We ask you to Read Our Content Policy so a clear comprehension of VT's independent non-censored media is understood and given its proper place in the world of news, opinion and media.