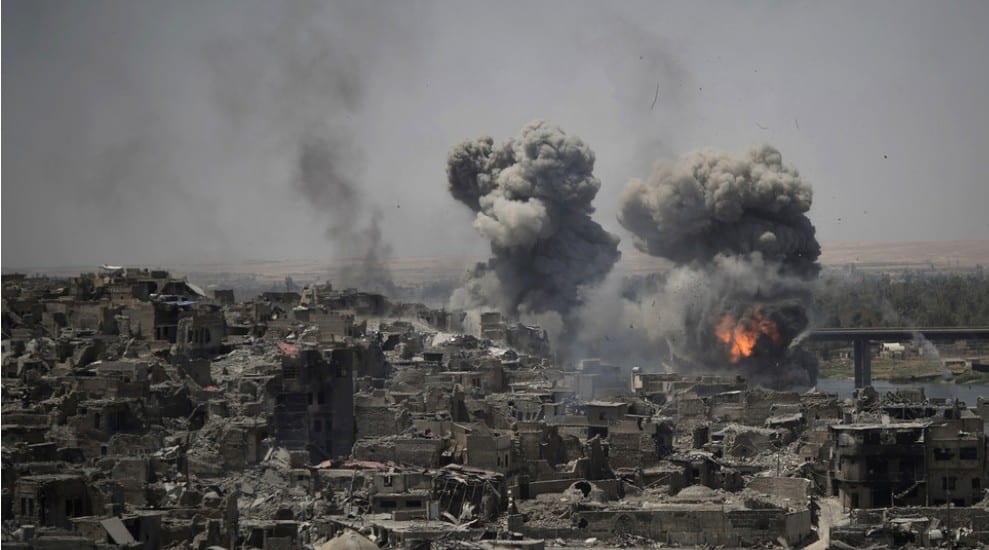 The US-led invasion of Iraq in March 2003 was a war now accepted to have been built on lies and is said to have killed as many as one million Iraqis. However, despite the horrific bloodshed inflicted on the Iraqi people, the Western public seems to have forgotten so many of the lessons that should have been taken away from the disaster that was the Iraq War.

In the build-up to the war on Iraq, Americans were told that eliminating Iraqi President Saddam Hussein, was necessary for world peace. This was due to his alleged possession of Weapons of Mass Destruction (WMD) as well as his alleged links with Al-Qaeda, among a number of other claims about Hussein’s genocidal ambitions.

Britain’s then-prime minister, Tony Blair, even likened Saddam Hussein to Adolf Hitler; this was at a time when anti-Middle Eastern sentiment was high and the 9/11 attacks were ripe in the minds of the Western public, who had been informed by then-US President George W. Bush that the ‘war on terror’ was akin to a ‘crusade’.

It turned out that almost none of the major allegations about Saddam Hussein were true, despite the Iraqi president’s other crimes against humanity. Yet, with no evidence, Western media fell in line and presented the invasion of Iraq as a just war, despite the International Commission of Jurists (ICJ) in Geneva stating that it constituted a war of aggression and a flagrant violation of international law prior to the invasion occurring.

Likely due in large part to the media coverage at the time, which had demonized everything Middle Eastern and Muslim, US public support for invading Iraq prior to ‘Operation Iraqi Liberation was between 52-64%, jumping up to 72% support on invasion day.

In the first two months of the ‘Shock and Awe’ invasion of Iraq, more than 7,186 Iraqi civilians were said to have been killed. Yet, at the time, Western media outlets were celebrating the US-UK victory as if none of this death and destruction had taken place, never truly asking where the alleged WMD were.

A BBC reporter, Andrew Marr, said on April 9 of British PM Tony Blair that “He said they would be able to take Baghdad without a bloodbath and in the end, the Iraqis would be celebrating. And on both of those points, he has been proven conclusively right.”

The blindly pro-US-UK government coverage went on, despite reports of US and UK war crimes. For example, on April 2, 2003, US aircraft struck a Red Crescent maternity hospital in Baghdad, resulting in a massacre according to The Guardian.

Within less than two years of the invasion, it is said that as many as 100,000 innocent Iraqi civilians were killed, yet George W. Bush still managed to get re-elected in 2004. This was with the United Nations Security Council (UNSC) not granting permission for the invasion, countless reports of civilian targets being hit, and calls from anti-war voices for the prosecution of Bush and Blair for war crimes.

On October 6, 2003, Time Magazine was still running cover for the Bush administration, only offering small criticisms of how President Bush miscalculated “fixing Iraq,” whilst The Economist went with a headline in May that read: ‘Now, the waging of peace, which was endorsing the idea of nation-building in Iraq and ignoring the alleged war crimes.

Eventually, all the major news outlets in the West, including the likes of CNN, BBC, Fox News, and others, bowed their heads in shame of their one-sided reporting on what had occurred in Iraq and what Noam Chomsky called their participation in ‘manufacturing consent.

Peter Van Buren, a former US State Department official based in Iraq for a year, was asked about whether the Western media had learned its lesson from Iraq and said the following:

“Lessons learned? No. La [‘no’ in Arabic]. Nyet [‘no’ in Russian]. As a State Department officer in 2003, I watched in horror as the mainstream press acted not only as stenographers for government lies but amplifiers of those lies, employing anonymous sources at the expense of their own credibility to create and then service a narrative demanding war. When their true editor-in-chief, George W. Bush, stood up, a mix of Ben Bradley and Lou Grant, to proclaim ‘you were either with us or with the terrorists,’ the media stifled dissent in their ranks nearly completely.

In 2022, little has changed. The media again beats the drum for war, albeit this time as stenographers for the Ukrainian government’s propaganda. Almost all of the video and imagery out of Ukraine comes from their government and those anonymous sources of 2003 have been replaced by no real sourcing at all.

Crushing dissent has caught up with the times, so voices for restraint are not just left off the New York Times op-ed page, they are canceled, de-platformed, and sent down the social media memory hole, unemployable as Putin-lovers.”

Today, the crimes committed in Iraq are well known to the Western public, yet the former leaders of the United States and the United Kingdom have never faced consequences for the chaos they caused. Not only has the war left Iraq divided, in terms of de-jure and societal ethno-religious division, but US forces are still stationed in Iraq in their thousands. NATO even announced early last year that they were expanding their own mission to 4,000 personnel in Iraq.

In addition to this, Iraq has faced the rise and fall of ISIS, a sectarian Sunni Shia war, US occupation, torture centers, and chemical weapon deployment against civilians, and this has stained the new collective memory of the new generation of Iraqis. The young generation of Iraqis now also face a corrupt Iraqi elite, installed into a confessionalist [sectarian] system of government, which has largely been based on a manufactured political culture of nepotism.

Has the US even been able to claim victory in Iraq after 19 years of destruction? Absolutely not. Washington is still battling to hold enough power in the country in order to combat the role of neighboring Iran, which jumped in to fill the power vacuum with its allied forces who were established to fight ISIS and Al-Qaeda.

Prior to the removal of Saddam Hussein, Iraq was not a country divided on sectarian lines and did not have a problem with Al-Qaeda or other terrorist groups. The country has been torn apart since 2003 and the same media organizations which religiously took the side of Western governments are today working as the same propaganda machines.

The active undermining of the Iraqi experience of war, with countless Western journalists saying things like, we should care more because the bombs are dropping on “relatively civilized” people, can be put down to racism, and it is this sort of dangerous rhetoric which enables Western audiences to ignore the alleged 6 million victims of the failed ‘war on terror.

Until the perpetrators of the Iraq War are brought to justice, the US government cannot claim the moral high ground over its adversaries, and its position on the world stage shall forever be tainted.

About Author:  Robert Inlakesh is a political analyst, journalist and documentary filmmaker currently based in London, UK. He has reported from and lived in the occupied Palestinian territories and currently works with Quds News. Director of ‘Steal of the Century: Trump’s Palestine-Israel Catastrophe’.