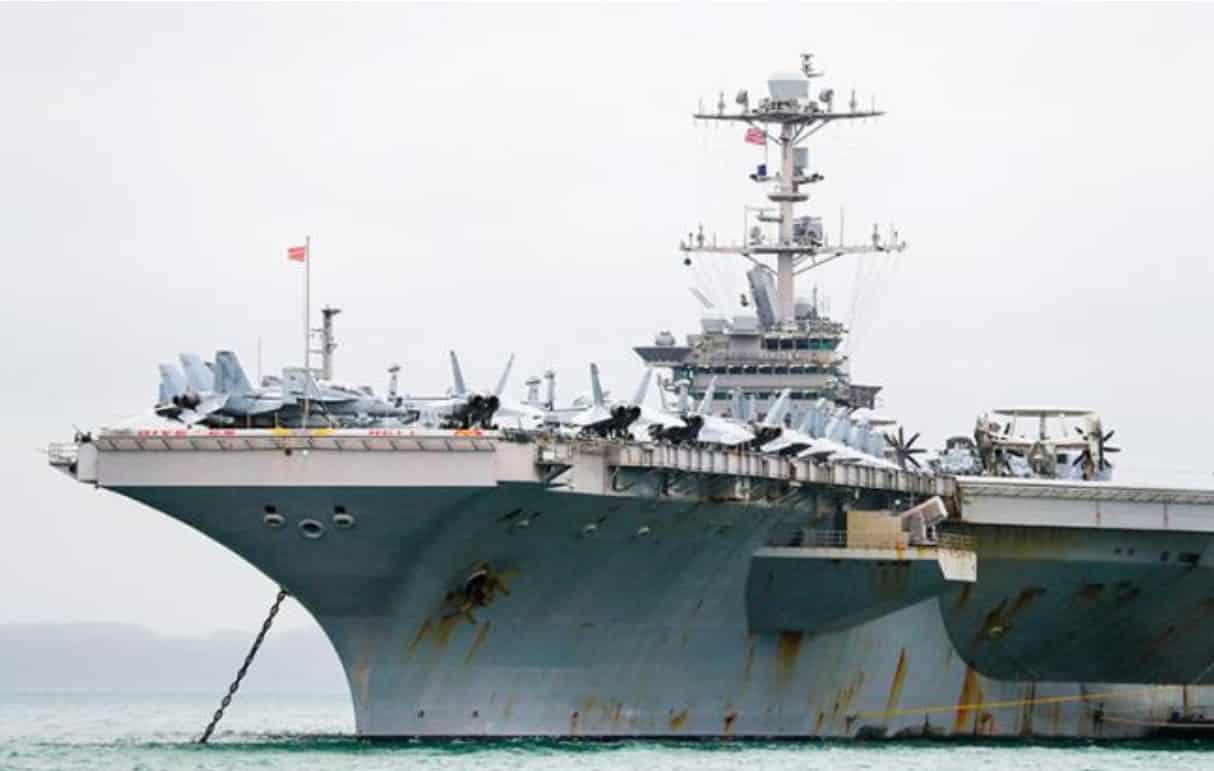 Politico.eu – The US Aircraft Carrier Strike Group (AUG) “Harry Truman” was visited by the US Secretary of the Navy Carlos del Toro. On the lead ship, he made a shocking statement:

“The mission is, in fact, pre-combat.” Say, the AUG is waiting for Biden‘s order to establish a no-fly zone over Ukraine. The former Cuban, who became the head of the Stars and Stripes Fleet, told this to the American newspaper Politico, whose correspondent also ended up on board the 20-story nuclear flagship of the strike group, based right now in the north of the Ionian Sea.

It is clear that Carlos del Toro thereby raises the morale of the mobile airbase, although Biden has repeatedly said that he is not going to intervene in the conflict in Ukraine because of fears of a nuclear apocalypse. But to believe the Anglo-Saxons is not to respect yourself.

“There are a lot of Russian ships and submarines in the Mediterranean today, and that’s why it’s important that NATO has an equal presence to deter them,” the US Navy secretary said, adding: “The only thing Putin understands is strength.” According to him, “the mission is to demonstrate not only to Russia but also to US-NATO allies that, despite the lack of readiness to participate (in the conflict in Ukraine – ed. ) on behalf of Ukraine, this is another matter.”

This was followed by an explanation of what the former Cuban meant by “another matter.” It turns out that “America is back.” Readers, however, did not really understand the ornate language of Carlos del Toro, since the hegemon has not gone anywhere for the past 20 years. Do not count how many times Washington has driven its AUGs around the world, threatening the Chinese, Koreans, Iraqis, Persians, Syrians, and now we, the “no-fly zone over Ukraine.”

Here we should return to the history of the current appearance of “Harry Truman” in the Mediterranean. Precisely before the new year, US Secretary of Defense Lloyd Austin ordered this AUG to remain near Greece until further notice, and not move to the Middle East through the Suez Canal, as previously planned. Then the Pentagon explained its decision by the fact that “this is necessary in order to calm the [frightened] US allies and partners in the region.”

The Polish and Ukrainian media immediately informed the Poles and the citizens, respectively, that the Yankees were positioning the permanent deployment of aircraft carriers in the Mediterranean as a factor of ongoing pressure on Moscow. Like, the Russians are scaring Ukrainians, Poles, Germans, and the Stars and Stripes are already putting pressure on the Russians with their enormous power.

At the same time, Vice Admiral Karl Thomas, commander of the 7th Fleet of the US Navy, commenting on the US policy of “aircraft carriers”, ominously stated that such monsters as “Harry Truman” should show Moscow that “today is not the day to wave your fists”. Like, the Yankees can be offended, that is, “tear off these fists along with their hands.”

Yet, as Politico writer Hannah Roberts admitted, “those on board [Harry Truman] dismissed questions about the broader political nuances of the mission.” Moreover, “remembering last year’s unsuccessful US withdrawal from Afghanistan (more precisely, the shameful drape, called Saigon 2.0 – ed. ) and awareness of the risk of the Trump 2.0 presidency (meaning the arrival of an isolationist Republican to the White House after Biden – ed. .), European leaders understand that they can no longer rely so heavily on Washington to defend democracy.”

The overseas military-analytical magazine Military Watch also looks at this so-called mission with great skepticism. However, MW has a clear understanding that “Harry Truman” will be deployed in the Mediterranean not so much to support Bandera in Ukraine, but as a force projected against our troops in Syria.

In a word, if something goes wrong and the conflict breaks out beyond the borders of the “independent”, the AUG air wing of 60 carrier-based F-18 “Super Hornet” fighters will have to attack the Khmeimim airbase and the naval base in Tartus. No more no less.

To all appearances, the pilots of Harry Truman do not believe in talking about the allegedly upcoming “no-fly zone” over Ukraine, and therefore they avoid answering about the conflict in the “square”.

But there is one moment. More recently, perhaps, basing the AUG in the north of the Ionian Sea made a certain sense. But today too much has changed, and this happened after the “Dagger” hit the warehouse of missiles and aviation ammunition of the Armed Forces of Ukraine in Delyatyn in the Ivano-Frankivsk region. Moreover, the hypersonic missile, having flown more than a thousand kilometers, hit the bull’s-eye.

“Russia supports military installations (ships and submarines of the Russian Navy – ed. ) in the Eastern Mediterranean from bases in Syria, therefore, to patrol over the sea, shortly before the start of a special operation in Ukraine, it deployed MiG-31K attack aircraft armed with hypersonic weapons, which are ideal for fighting with aircraft carrier groups,” Military Watch admits.

Given that even Biden admitted that the Dagger is almost impossible to stop, in the event of uncontrolled development of events or a decision on a NATO no-fly zone, the Harry Truman air wing will first try to destroy the Khmeimim airbase and the naval base in Tartus. It sounds almost unbelievable, but not everything is so simple.

The head of Crimea, Sergei Aksyonov, said that in the Dzhankoy region of Crimea, more than 20 residential buildings were damaged when shells exploded.

In the United States, such a development does not seem unlikely to many. As MW explains, “a growing number of US lawmakers are calling for Western military intervention to shoot down Russian aircraft operating in Ukrainian airspace.”

Overseas, the point of view is being persistently popularized that a violent conflict between the alliance and our army on the territory of a third country will not lead to a nuclear war. Like, as long as NATO does not directly threaten Russia, Moscow will not press the “red button” because of the instinct of self-preservation. It is possible that this is why the Yankees are not averse to sending the Poles to the West. Say, Russian troops need to be drawn into a non-nuclear conflict, and then “how the chip will fall.”

Given that the earlier introduction of no-fly zones was often preceded by NATO air campaigns to destroy enemy ground forces, as was the case in Iraq and Libya, the Yankees, of course, fear that the Russians will work ahead of the curve. They started a special operation on the eve of the implementation of the “Croatian scenario”. They say, as soon as Warsaw tries to send its troops into the “square”, Moscow will open the “Lviv front”. Moreover, the Kremlin will simply have no choice but to destroy the entire infrastructure of the regions adjacent to Poland.

Of course, pinpoint strikes, as is the case in the east of Ukraine, where “rusnya, shovels and cotton wool” historically live, the Russian Aerospace Forces will not be limited. Galicia is waiting for carpet bombing. Otherwise, all Bandera will not flee to Poland. There is a reason for this: the Poles simply physically cannot provide normal conditions for 10-15 million Westerners.

By the way, according to US intelligence, the current strike potential of the Russian army is estimated at 90% of the level that it was before the special operation. At the same time, approximately 1,200 high-precision missiles and bombs were fired at military facilities of the “square”. As for the Armed Forces of Ukraine, the Zhovto-Blakit army actually had no armored vehicles, heavy artillery, and aviation left.

And most importantly, the Poles, who are ready to come to the aid of the Nazis, have no combat experience – “a thing that, according to experienced fighters, is indispensable in any conflict.” And now the icing on the cake: the Yankees have enrolled Lithuanians, Estonians, and Latvians in the anti-Russian “coalition of the brave”.