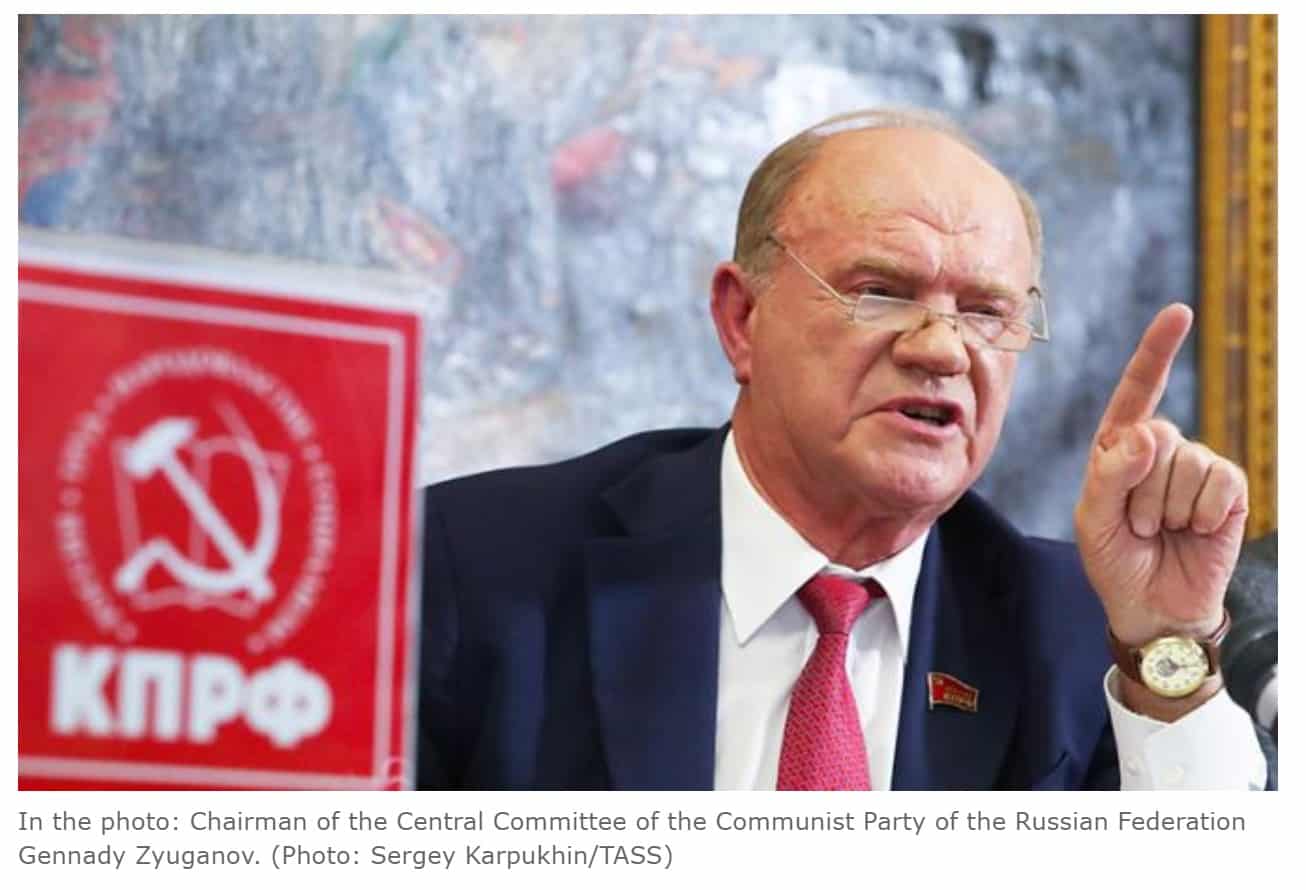 Svpressa: By the 29th day of the military special operation, the Russian army occupied most of Mariupol. A few more days and Bandera localized within the Azovstal plant, which they turned into a fortress. From this moment on, the units of the Russian Federation can be transferred from Mariupol to the north, where Russian troops are now systematically closing the Donetsk grouping of the Armed Forces of Ukraine into the cauldron.

At the same time, there is a power vacuum in the liberated territories. The head of Roskosmos Dmitry Rogozin on social networks came up with the idea of ​​creating military commandants’ offices there. For his part, a military expert and analyst Yuriy Podolyaka is convinced that the Nazis gave the Ukrainian people an ideological “brain firmware”, and after the victory, a thorough “rewiring” will be required.

What the lessons of a special operation look like today, what actions are needed, the chairman of the Central Committee of the Communist Party of the Russian Federation Gennady Zyuganov argues.

“We are now seeing how the aggression unleashed against the Donbass by the Bandera and Tseraushniks eight years ago is ending,” says Gennady Zyuganov. “In fact, we are conducting a peacekeeping operation, and it provides for denazification.”

As far as demilitarization is concerned, it is going quite well. But the fight against Nazism and fascism is a very difficult and responsible task.

I served for three years in the Group of Soviet Forces in Germany, in the radiation and chemical reconnaissance platoon. We also provided security. In the city of Gera in eastern Germany, where I served, there were about a thousand former SS men whom we controlled. All of them had blood on their hands up to the elbows. But they understood that they were dealing with a victorious country, with a strong, combat-ready army, with its security service. Therefore, there was not a single act of vandalism, not a single attempt by these SS men to act against our country or against the local authorities.

Now, together with our team, I have prepared a special note. It was sent to the president and members of the Security Council, the prime minister and ministers, governors, and heads of legislative assemblies.

The document is called “Experience of the denazification of Germany and other countries of Europe after the Second World War”. It describes in detail how this was done in the zone, which was subordinate to the Soviet Armed Forces in the GDR, how it took place in Hungary, Romania, and Finland. This is a unique experience.

“SP”: To what extent is this experience applicable in Ukraine?

– To get rid of fascism and Nazism in Ukraine, we must first of all deal with the Ukrainian cadres: who pursued the wild policy of “who does not jump that Muscovite” and “Muscovite to Gilyak”? Find out who planted this ideology in Ukrainian schools. Throw out textbooks where the Nazi ideology is at the forefront, where the heroes are not the victorious fathers and grandfathers, not Zhukov, Rokossovsky, Vasilevsky, and Konev, but the Nazis Bandera, Shukhevych, and the like. Those who slaughtered the Poles in Volhynia and burned people in Khatyn.

The SS division “Galicia”, recruited from Ukrainian volunteer collaborators, was the most vicious and disgusting SS “dog” that was unleashed on civilians, women, children, the elderly, destroying them by the tens of thousands.

This needs to be shown now, including to the people of Ukraine.

Denazification implies a full-fledged dialogue with its citizens. They need to be explained what fascism is, and how a strong, rich, and smart Ukraine fell into the hands of scoundrels after the 2014 coup. People need to open their eyes to the fact that they have fallen into the clutches of degenerates raised by Americans.

Let me remind you that the Yankees after 1945, instead of carrying out a full-fledged denazification, warmed up the Nazis. They took out German archives, including the SS, as well as documents of nationalist units. The Americans raised Ukrainian nationalists in the US and Canada and then brought them to Ukraine. De facto, they were preparing a springboard from Ukraine for an attack on our country.

You need to understand: for eight years in power, the Nazis managed to brainwash the Ukrainians well. We have a difficult and responsible job to neutralize this poison.

At the same time, it is necessary to restore broken economic ties, knots, vessels. In Ukraine, there were 500 enterprises that, during the Soviet era, cooperated well and produced excellent aircraft, cars, engines, and ships. Ukraine from the all-Union boiler received 50 million tons of oil annually, plus fuel at an affordable price.

And today the energy industry is developed there, there is a wide field for cooperation. In addition, it is necessary to explain to people that Europe does not need the Ukrainian market at all. On the contrary, the West has done everything to strangle the Ukrainian industry.

The economist reminded the Russians of the ancient rule of saving money.

But the most disgusting phenomenon of Nazi Ukraine is the secret bio-laboratories in which strains were grown to spread deadly diseases like plague and cholera. They were not engaged in “civilian” science – there is not a single publication about the work of these stations in any scientific journal. On the contrary, there is evidence that experiments were carried out to infect territories with the help of insects, birds, bats. This is the most terrible example of warfare, prohibited by all international treaties.

Recently, the State Duma voted to investigate this crime – before the people of Ukraine, before Europe, and the whole world. By the way, this is the third parliamentary investigation initiated by the Communist Party. The first was in the Chechen war – it was headed by Govorukhin. The second – on the accident at the Sayano-Shushenskaya hydroelectric power station. And now a new investigation, the results of which will also need to be shown to the population of Ukraine.

“SP”: – What do the first results of the special operation look like?

She gave instructive but at the same time terrible lessons. I repeat everything that is happening now is a consequence of the war that Ukrainian nationalists have been waging in Donbas for eight years.

On the other hand, it is a clash of civilizations. Samuel Huntington once wrote about this, and I answered him in my book Globalization and the Destiny of Mankind. Now the West is fighting against the Russian, Russian, Slavic civilizations, which they are trying to split and destroy in order to capture our gigantic expanses. This, I note, is an old dream of the Anglo-Saxons. But today the struggle has acquired new – hybrid – forms in all areas, from the financial sphere to culture.

The lack of will, the facelessness of Europe, which agreed to dance to the tune of the Americans, was also a lesson, although this does not bring any benefit to Europe itself. It is unprofitable for the Germans to buy expensive energy resources – this makes the German economy uncompetitive. For France, the destruction of ties with Russia is so disadvantageous that Macron gave instructions that, where possible, these ties should not be cut off. And it is unprofitable for Southern Europe to collide with Russia – Bulgaria refused to participate in a military adventure, Hungary forbids the supply of weapons through its territory.

What is fundamental in the current situation is the solidarity with Russia of international left-wing patriotic forces. This is also a very important conclusion.

The special operation highlighted our strengths and weaknesses. The advantages are that the patriotic part of society in Russia has rallied, knowing full well that a further buildup of the military power of Ukraine along with the fascistization of Ukrainian society can lead to catastrophic consequences. But at the same time, the authorities, United Russia, behave in an absolutely defiant manner towards the left-wing patriotic forces. Instead of the cohesion that President Putin spoke about, we see an attempt to destroy the socio-political system. Drafting laws on three-day voting, on the virtual elimination of honest control in elections, on gagging opponents.

In this situation, we need to unite as much as possible and implement our program for the revival of the country. First of all, it is necessary to take care of science and education – our bill “Education for All” is aimed at this, guaranteeing everyone both free education and the first job. It needs to be urgently considered and accepted.

Our children are still taught from the textbooks of Soros, according to Solzhenitsyn. And we must teach on the Russian classics, on the example of our victories, outstanding scientific and cultural achievements of our talented compatriots.

We need to support industry, develop new industrialization. And for this it is necessary to invest in the development of machine tools, electronics, robotics. We must do everything for the development of agriculture. The fields of our country are capable of feeding 500 million people. The Communist Party of the Russian Federation has programs approved by the State Council and the President, which make it possible to realize such a task. These are programs to support the countryside, the comprehensive development of mechanical engineering.

And it’s time for us to figure it out: how did it happen that 300 billion dollars of gold and foreign exchange reserves of the Russian Federation remained behind the cordon, who allowed this? Who pushed through the decision, according to which we sold 600 tons of gold, mined over the past two years, abroad? We must understand: who allowed almost all the currency to be left behind the cordon at this dashing time?

We must immediately adopt a series of laws that will regulate the prices of essential goods. We have more than 5 million tons of sugar in the bins – and its prices are rising! It is time to finally admit: the assertion that the market itself will regulate everything is a false chimera! It is necessary to set the minimum wage at the level of 25 thousand rubles, and not 13 thousand with a penny, as it is now! It is necessary to adopt a development budget of 33 trillion rubles, which is proposed by the Communist Party!

It is time to put an end to the slander against the Soviet era, to put an end to anti-Sovietism. And slam the viper named “Yeltsin Center”, from where the Americans are spreading dirt directed against our State!

Here is a real program that will allow you to unite and move forward energetically! I’m sure people will hear us!