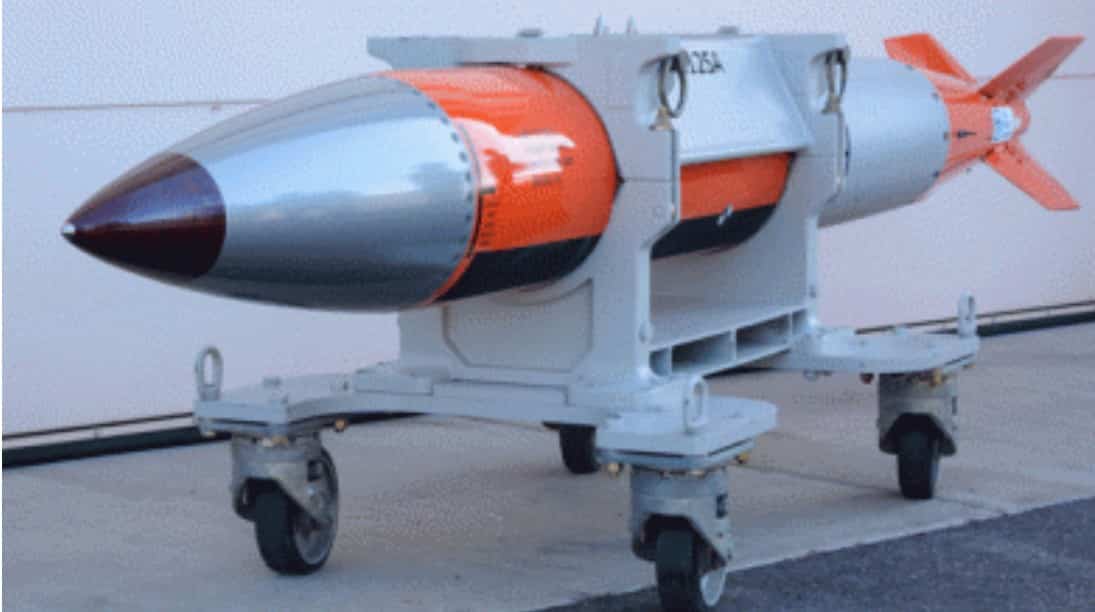 GlobalResearch.ca – “Meeting with Congress, Zelensky Asks for More Weapons and a No-Fly Zone” according to the New York Times.

A No-Fly Zone is tantamount to a World War III scenario.

Who writes and/or determines the content of  Zelensky’s speeches?

Zelensky is a political proxy, an obedient lackey. Visibly his speeches had been carefully crafted on behalf of his U.S. sponsors, i.e. Powerful factions within the “Deep State” in support of America’s defense giants.

The Military-Industrial Complex has made billions since the Russian invasion. Lockheed Martin, Raytheon, Northrop, BAE, et al. have seen their shares go fly high, amidst a slump in market values following the Russian invasion on February 24th. For more details see Asia Times. 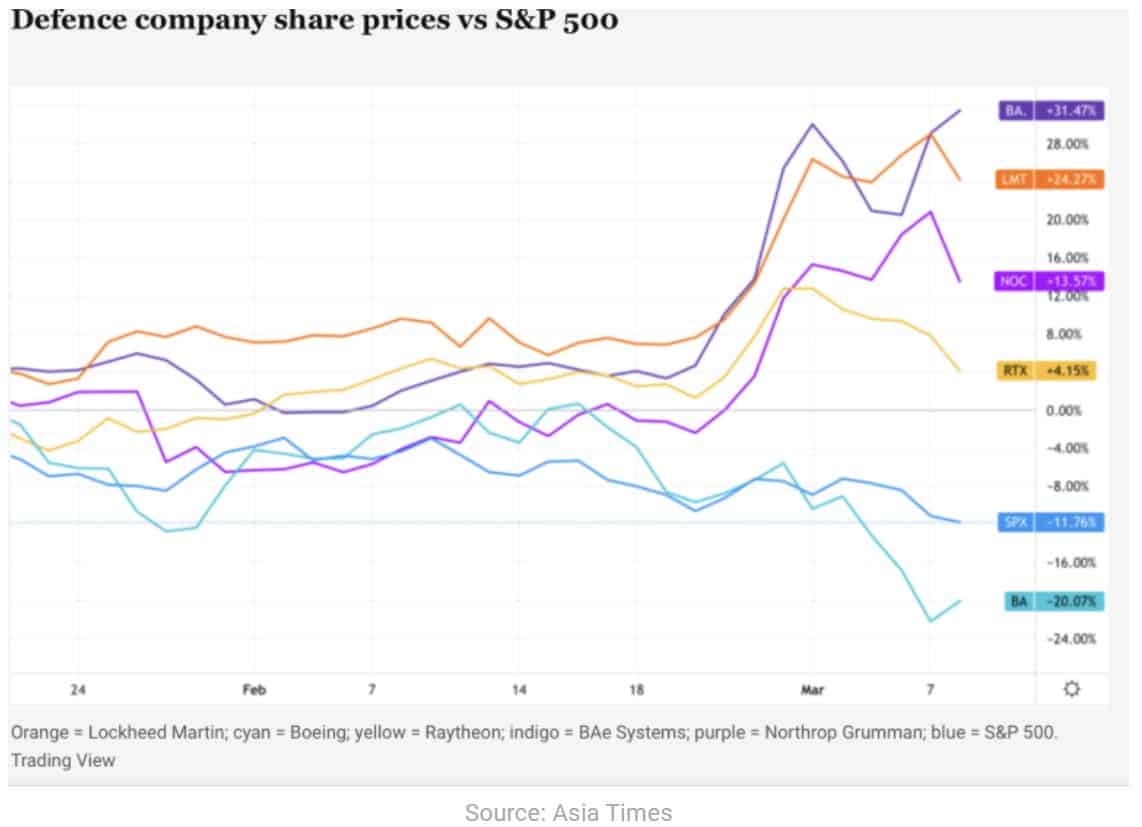 Largest Military Budget in US History

In the immediate wake of Russia’s invasion, the US Congress approved (on behalf of defense contractors, private mercenary companies, et al.), the “largest-ever defense spending bill” in US history, “while U.S. allies in Europe pledged to dramatically ramp up their defense spending to counter the Russian threat, measures that will bring lucrative new contracts to the arms industry” (The Hill, emphasis added).

Did the defense giants have foreknowledge of the Russian attack?

A month prior to the invasion: “top western arms companies were briefing investors about a likely boost to their profits”. Gregory J Hayes, the chief executive of US defense giant Raytheon, stated on January 25:”

“Raytheon and Lockheed Martin — are openly telling their investors that tensions between the countries are good for business.”

Let us be under no illusions: A World War III scenario involving the use of nuclear weapons directed against Russia and China as well as against several non-nuclear states has been on the drawing board of the Pentagon for more than 20 years.

And America’s major defense contractors which produce the nukes are increasingly involved in strategic decisions pertaining to their use as well as the formulation of US nuclear military doctrine. There is a powerful faction within the Deep State which considers that a nuclear is “winnable”. And winnable WWIII scenarios and simulations (most of them classified) are routinely contemplated. A dangerous shift in US nuclear doctrine occurred in 2001 under the Bush administration.

In early 2002, the text of George W. Bush’s Nuclear Posture Review had already been leaked, several months prior to the release of the  September 2002 National Security Strategy (NSS) which defined, “Preemption” as: “the anticipatory use of force in the face of an imminent attack”.

The Doctrine of Mutually Assured Destruction (MAD) of the Cold War Era was scrapped and replaced with the Doctrine of Preemptive Nuclear War (PNW), namely the “peacemaking use” of nuclear weapons as a means of “self-defense” against both nuclear and non-nuclear weapons states.

One thing was replaced by its opposite. MAD is real, PNW is fake. There is no such thing as “a peace-making use” of nuclear weapons.

Secret Meeting on Hiroshima Day 2003. Setting the Stage for “The Privatization  of Nuclear War”

A year later, on August 6, 2003, on Hiroshima Day, a secret meeting was held behind closed doors at Strategic Command Headquarters at the Offutt Air Force Base in Nebraska.

“Senior executives from the nuclear industry and the military-industrial complex were in attendance. This mingling of defense contractors, scientists, and policy-makers was not intended to commemorate Hiroshima. The meeting was intended to set the stage for the development of a new generation of “smaller”, “safer” and “more usable” nuclear weapons, to be used in the “in-theater nuclear wars” of the 21st Century.” (Michel Chossudovsky, August 2011)

This meeting was instrumental in setting the stage for the privatization of nuclear war leading up to Obama’s $1.2 trillion dollar nuclear weapons program, which is now slated to increase to $2 trillion by 2030.

Diplomacy is scrapped in favor of Big Money. The privatization of both conventional and nuclear war is the driving force behind the crisis in Ukraine, coupled with the influx of foreign mercenaries recruited by private companies (on contract to the Pentagon and NATO).

While Biden is officially against the use of nukes on a first-strike basis, the lobby groups acting on behalf of the defense giants are calling the shots.

Nuclear War Is “Good for Business”, But It Requires a “Human Face” and a “Peace-Making Mandate”

The Defense Giants are pushing the preemptive nuclear war doctrine with Russia, allegedly as a means of self-defense and national security for America and its allies. And the media applauds. Public acceptance of WMDs is predicated on a public relations campaign that posits mini-nukes as humanitarian bombs.

The “peacemaking use” of nuclear weapons, missiles, and fighter jets is being used as a marketing strategy on behalf of  Lockheed Martin, Raytheon, Northrup Grumman, BAE, et al In the latest state-of-the-art B61-12 mini-nuke, the  “more usable” “low yield” nuclear weapons are portrayed as a “humanitarian bomb” “harmless to civilians” because the explosion is underground.

The B61-12 “peace-making bomb” has a maximum yield of 50 kilotons which is more than three times that of a Hiroshima bomb (15 kilotons) which resulted in an excess of 100,000 deaths in a matter of minutes.

Humanitarian Preemptive Nukes are part of a dangerous ideology as well as a marketing strategy on behalf of the defense giants. The unspoken reality of a nuclear war is “Mutual Assured Destruction” (MAD) and the End of Humanity as we know it.

The corporate media is complicit. Lies through omission. There is no informative “fear campaign” on something which is real.

The REAL dangers of nuclear war which threatens the future of humanity do not make the headlines.

In contrast, a 24/7 fear campaign spearheaded by the media in the course of the last two years has focussed on the deadly impact of COVID-19, which according to the WHO is similar to seasonal influence. Inventing Fear: “Why Is the Virus Such a Threat”

V – the Virus is portrayed as a “Terrorist”

A sensationalist (scary?) BBC report portrays the SARS-CoV2 as a “Weapon of Mass Destruction”.

“Why is the Virus such a Threat”, because it is a “hit and run killer” with “brilliant evolutionary tactic”:

“Master of Deception. In the early stages of an infection, the virus is able to deceive the body.

It [the virus] behaves like a ‘hit and run’ killer

The amount of virus in our body begins to peak the day before we begin to get sick.

“This is a really brilliant evolutionary tactic – you don’t go to bed, you go out and have a good time,” says Prof Lehner.

So the virus is like a dangerous driver fleeing the scene – the virus has moved on to the next victim long before we either recover or die.

In stark terms, “the virus doesn’t care” if you die, says [Cambridge] Prof Lehner, “this is a hit and runs virus”.

It does peculiar and unexpected things to the body (BBC, James Gallagher, October 22, 2020, emphasis added)

About Author: Michel Chossudovsky is an award-winning author, Professor of Economics (emeritus) at the University of Ottawa, Founder and Director of the Centre for Research on Globalization (CRG), Montreal, Editor of Global Research. He has taught as visiting professor in Western Europe, Southeast Asia, the Pacific and Latin America. He has served as an economic adviser to governments of developing countries and has acted as a consultant for several international organizations. He is the author of eleven books including The Globalization of Poverty and The New World Order (2003), America’s “War on Terrorism” (2005), The Global Economic Crisis, The Great Depression of the Twenty-first Century (2009) (Editor), Towards a World War III Scenario: The Dangers of Nuclear War (2011), The Globalization of War, America’s Long War against Humanity (2015). He is a contributor to the Encyclopaedia Britannica. His writings have been published in more than twenty languages. In 2014, he was awarded the Gold Medal for Merit of the Republic of Serbia for his writings on NATO’s war of aggression against Yugoslavia. He can be reached at [email protected]