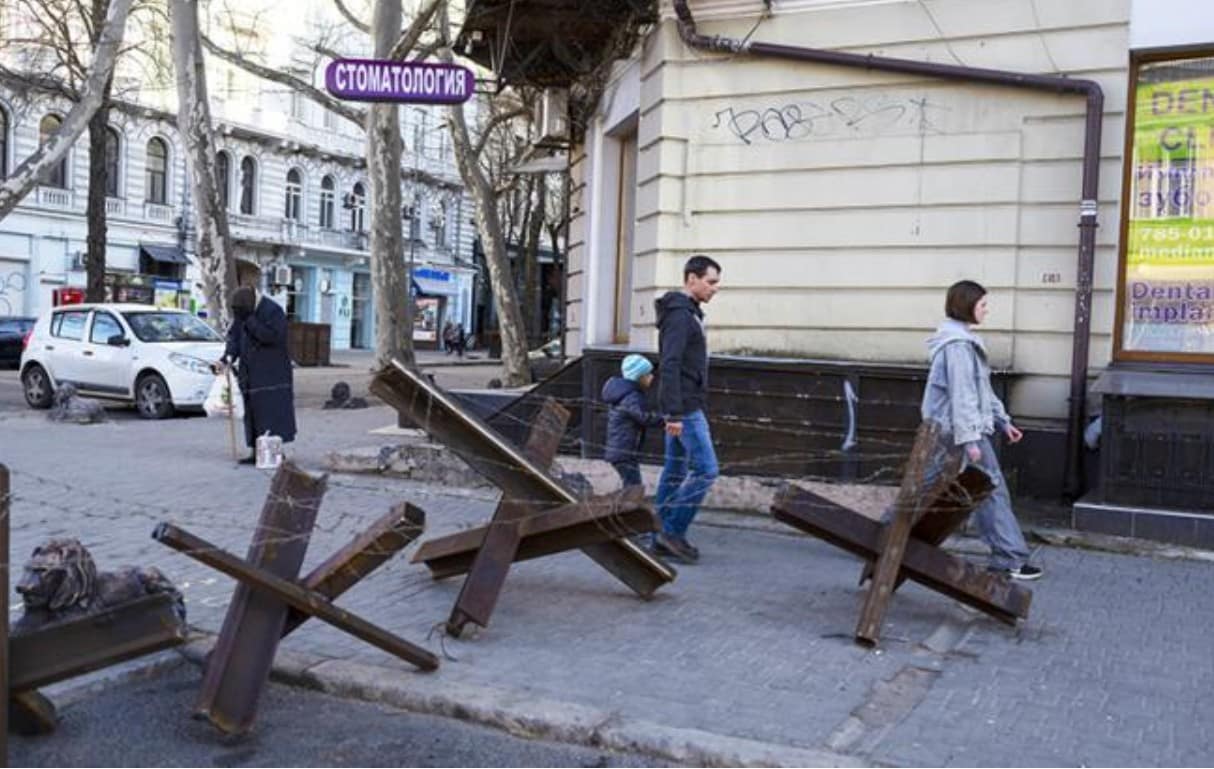 SVPressa: The fact that the Ukronazis hide behind defenseless civilians as a human shield has been noted many times. This happened both in Mariupol and Kharkov. Sneaky, cynical methods of protection, when military equipment of the Armed Forces of Ukraine is located next to schools, kindergartens, hospitals, and residential buildings, is already a proven tactic.

Recently, a document from Odessa appeared on the network – an extract from the order of the head of the local regional military administration Maxim Marchenko, consisting of three paragraphs. It talks about the early organization of strongholds of the Armed Forces of Ukraine and precisely in schools, hospitals and other charitable institutions. According to this document, warriors are expressly ordered to hide behind civilians. The Russian troops are still very far away, and the local “Fuhrer” is already preparing to defend himself in such a misanthropic way.

Bogdan Bezpalko, a member of the Council on Interethnic Relations under the President of Russia, is convinced that the author of the order is a Russophobe who has gone through the “good school” of Banderaism:

– However, from the point of view of PR, he went a little wrong by issuing this order. So he confirmed that the national battalions deliberately place firing points near the most vulnerable civilian facilities: schools, kindergartens, shopping centers, in dense residential areas. This is done in order, firstly, to turn local residents into a “human shield”, and secondly, to create the most bloody picture possible for the global media.

Obviously, realizing this, Marchenko quickly disavowed this order. But as the Russian proverb says: “Written with a pen, you can’t cut it with an ax.”

“SP”: – So you think that the information about this order is not fake?

– The order is no different from the calls of Ukrainian propagandists such as Farkhutdin Sharafmal and others like him – to kill the wives and children of the Russian military. They explicitly refer to SS-Obersturmbannführer Otto Eichmann. After that, it is difficult to say that in Ukraine “there is no Nazism.” It breaks out, after which specially trained people from international organizations explain to the Ukrainian Nazis that from the point of view of public opinion, their calls look somehow very cannibalistic, it would be good to refuse such rhetoric.

In fact, the denials appear not because they abandoned fascist ideas, but because all this looks unsightly from the point of view of advertising in the West.

“SP” – Unfortunately, the West stubbornly ignores Ukrainian Nazism. Information about him practically does not breakthrough.

— No, it breaks through a little. Many people who have left the territory of the former Soviet Union live there. They share the truth with their friends. Information about the true state of affairs appears in the media.

Georgy Dudorov, deputy commander of the reconnaissance company of the Russian Armed Forces, died during a special operation in Ukraine.

Ukrainian nationalists are trying to be hypocritical, but we will remember them, we will draw conclusions and practical actions based on the opportunities that we will have. Odessa, I think, will be liberated in the near future and Odessans will be able to breathe easy, getting rid of all these nationalists. The only pity is that people like Marchenko will try to leave behind as much destruction as possible.

“SP”: – In the meantime, apparently, to prevent heavy casualties among the civilian population, our troops are in no hurry to Odessa. Serpent Island was occupied, but they are not advancing further.

— I am not a military expert, but they probably thought that it would be easier to bypass Odessa from the north, linking up with Transnistria and then calmly try to liberate the city…
In any case, Odessa is by no means a front-line one. Kherson has already been liberated, but there is still Nikolaev on the way to Odessa. Possible amphibious assault with support from the north.

Nothing interferes with the landing operation. In addition to the main base of the Ukrainian fleet in the Practical harbor.

But the liberators, judging by the order of the head of the Odessa Regional State Administration Maxim Marchenko, will expect an ambush in schools and hospitals. They are re-profiled “to meet the needs of the state.” Eight educational institutions and five medical institutions have been named around which anti-tank and firing positions, engineering and sapper fences will be equipped. At the same time, they do not want to “allow the exit of the civilian population through humanitarian corridors” – everything is like Mariupol.

How else will the former Aidar commander, whom President Volodymyr Zelensky appointed head of the military administration of the region, act differently. The former governor of Odessa, Sergei Grinevetsky, was suspected of loyalty to Moscow. And now, the order of the state Nazi prescribes the repetition of the actions of the Ukrainian army in the Donbass.

Military expert, retired colonel Mikhail Timoshenko recalls that Marchenko’s genesis is known – he is still a beast. And the degree of atrocities in Ukraine of the other Natsiks, let’s call them that, is prohibitive. Even animals don’t do that, doing such a terrible thing to others – they drive people into the basement and set fire to the house so that it collapses.

– I think that Marchenko’s order to deploy the military in schools and kindergartens is quite realistic. He wants to create unbearable conditions for the inhabitants of Odessa. Although quite a lot of people left there.

Why are these anti-tank hedgehogs on the streets of Ukrainian cities, including Odessa! After all, an armored recovery vehicle (BREM) will pass by, rake aside all these hedgehogs, and “walk Vasya”! But European propaganda specialists, who know how to arouse popular indignation, advised doing so.

Our special operation is planned correctly – the troops are moving, clinging to the borders. Further, if there are forces and the enemy is stretched out, you need to close this bag and, if possible, carry out a sweep. But… I don’t see these sweeps yet.

Although there are no military operations without miscalculations, it is almost impossible to take everything into account. Take, for example, the Ukrainian city of Putivl. We entered it without resistance, touched no one. And three days later, an escaped military commissar appeared and distributed weapons to the population. We got a dangerous hearth in the rear. People are shooting at each other. Relatively speaking, the neighbor’s dog didn’t like it, so he went and shot him.

“We didn’t mark our presence, we didn’t raise our flags over local administrations. Everything remains the same there – even Kiev television works. Local residents took our humanitarian aid, said thank you, and went about their business.

It is necessary to close all borders and create local authorities. But from whom? After all, the locals are afraid of each other. During the day, a person will say that “Ukraine must be neutral, free from the Nazis,” and at night his family will be killed.

“SP” – How was it in the days of Pavel Korchagin?

One way or another, Odessa will have to be liberated. There, in the roadstead, our landing ships stood, pulling back the forces of the Armed Forces of Ukraine, preparing to meet the alleged landing. This facilitated the movement of our troops in the Nikolaev direction. Nikolaev, like Odessa, must be taken. But these are all industrial cities.

At one time in Odessa, they conducted a survey on the topic with whom they want to be? More than half believe that their city should remain a “free port”. So we the devil know what we’ll get our hands-on. How to deal with it later?

– Long and tedious. This is not a walk with a machine gun on your shoulder. This is the liberation of the whole country. Remember how the denazification of Germany was carried out, which was divided into four zones of occupation.

In our zone then there were military commandants’ offices and the administration of the GSVG. We identified those who could: the SS and the Gestapo. The Germans themselves dealt with the rest. They created a new education system geared towards anti-fascism. At the same time, the Germans remained Germans with all their discipline. Then everything happened there not the way we dream to do here with the brotherly people.

Ukrainian neo-Nazis must answer for everything. In Russia, Marchenko is being investigated in criminal cases on the crimes of the Ukrainian security forces in the Donbass as a suspect. Odessa has always been one of the most independent cities in Ukraine. And so Zelensky appointed the former commander of the assault battalion as the head of the Odessa region. It was financed by oligarch Igor Kolomoisky. Incidentally, a criminal case has also been initiated against him in Russia.