ALERT: Portions of this article were sourced from Russian State-Controlled Media

SouthFront – Civilians who left the war-torn city of Mariupol through the humanitarian corridors secured by Russian and DPR forces are testifying on inhumane warfare and war crimes committed by Ukrainian nationalists forces.

Residents of Mariupol confirmed that Azov members forcibly pushed them out of their apartments and used them as firing points. Local residents say that the military retreated to civilian facilities, including schools and kindergartens.

DPR sources shared a new video showing the school that was used by the AFU and Azov militants as a military post for a week until the Russian military took control over it. 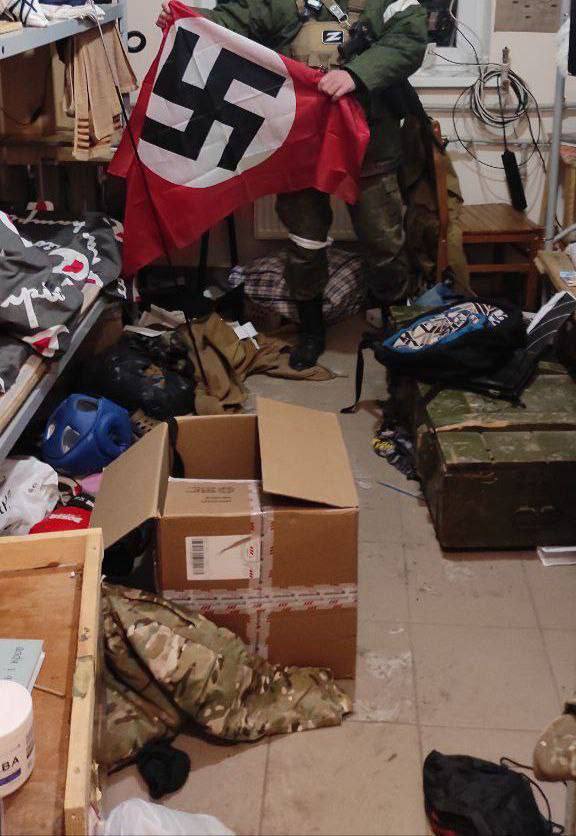 School in the center of Mariupol. There were Nazis from "Azov" in it and in neighboring houses even at night.
The "Azovites" were hiding behind civilians, and kept the equipment in the yard of this school. pic.twitter.com/Q4Z0A6RHed

Mariupol resident: “The Nazis from Azov were proud of bullying people. They showed a video they took of how a man blew up who couldn't hold a grenade any longer. They hid in school. They mocked children. They were proud of themselves for doing so much killing." pic.twitter.com/SBfFPhURHk

I saw an interview with a reporter in the Mariupol who said neither he or his fellow reporter friends have seen this school. Seems mighty fishy. Also this pic.twitter.com/4mVnSCCuhX

Photo from the smartphone of a militant of the 36th Marine Brigade, confirming the presence of Ukrainian Nazis in one of the schools in Mariupol pic.twitter.com/PAc3Ujm5Sw

resident of Mariupol told how Ukrainian nationalists hid between schools and kindergartens. pic.twitter.com/wusE8FlfG2

Emotional video – a resident of Mariupol tells how the Ukrainian military hid in schools, kindergartens and residential areas because they could not defend the city on the borders. pic.twitter.com/Slc4FXwCmk

On numerous videos, civilians who managed to escape from Mariupol confirmed that they did not contact the Ukrainian military, and they did not receive any humanitarian aid. They testified on various war crimes committed by the AFU.

“We just saw a 17-year-old girl who went for water with her father and was just killed by a Ukrainian sniper.” – the woman from Mariupol claimed.

The man was 38 years old, and his daughter was 17, although she looked about 14 years old, so the sniper could not confuse her with an armed Russian fighter. The father brought the murdered daughter in his arms to the next building.

The fact that civilians were massively passing along this road looking for water was widely known. There were wells on the coastal street, and civilians, mostly men, ran there for water at their own risk. Everyone knew about these wells, where there were always civilians.

The man in the video also confirmed that a Ukrainian sniper killed another civilian man who was walking down a nearby street.

Residents of Mariupol confirmed that the city administration abandoned them from the first days of hostilities. It is known that the mayor of the city has left the city and continues to urge the civilian population to “hold on” and “resist Russian aggression”, convincing them that Ukrainian forces are successfully repelling Russian attacks.

For a month, civilians lived with no information. They were not informed about any ways to leave the city. Since the first days of mop-up operations in Mariupol, Ukrainian forces, instead of providing civilians with access to quieter areas of the city where they could get access to hospitals or water, banned them from leaving their homes and shot civilians who came out of their yards.

As more and more witnesses testify about the real atrocities of the Ukrainian Armed Forces, Ukrainian propaganda is failing. A similar phenomenon took place in 2008 during the Georgian aggression against South Ossetia. In the early days of the war, Western propaganda trumpeted that Russia had allegedly invaded the territory of Georgia. However, it quickly became obvious that it was Georgia that acted as the aggressor and hundreds of facts of atrocities committed by military personnel of the Georgian army and NATO soldiers supporting them on the territory of South Ossetia poured into the information space. As a result, the West and international organizations were forced to recognize the real state of affairs.