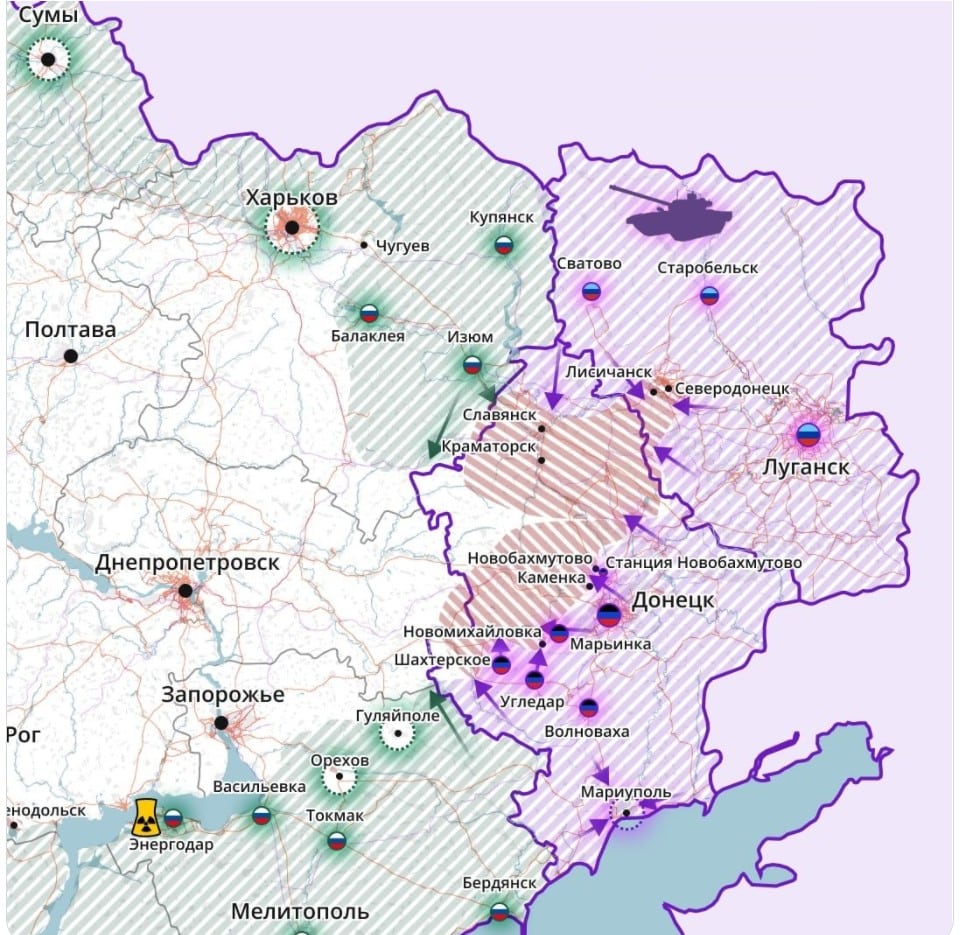 SouthFront.org – A month of Russian military operations in Ukraine has passed. Kiev, Kharkiv, Chernihiv, Sumy, and Nikolaev are almost blockaded by Russian troops, Kherson and most of the Zaporozhye region are under Russian control. The Ukrainian air force and air defense system were almost completely destroyed, the Ukrainian Navy does not exist anymore.

BREAKING: Russia publishes names of 3 US servicemen killed in Donetsk – Captain Michael Hocker, Lieutenant Logan Schramm & Lieutenant Cruz Toblin. According to an official statement, the servicemen were killed during the fighting in Maryinka. They were mercenaries. US keeps mum. pic.twitter.com/9CqFb91c5N

According to the Russian Ministry of Defense, to date, the losses of the Armed Forces of Ukraine have amounted to about 30 thousand servicemen, including more than 14 thousand killed.

Warning, we don’t know if these are Americans:

On March 25, the Russian Ministry of Defense officially confirmed that storming of Ukrainian cities is not a priority of the Russian military operation. The Russian troops enter the cities only on the territory of the DPR and LPR. High-precision weapons are used to suppress the entire military infrastructure of the enemy, the main goal is to exhaust the AFU units and force them to surrender.

There were two possible options. The first was to limit the battlefield by the territories of the LPR and the DPR within the administrative borders of the Donetsk and Lugansk regions, which is enshrined in the constitutions of the republics. But then we would be faced with the constant reinforcement of the grouping involved in the so-called operation of the joint forces.

Therefore, the second option was chosen, which provides for actions throughout the territory of Ukraine with the implementation of measures for its demilitarization and denazification.

The course of the operation confirmed the correctness of this decision. It is conducted by the General Staff in strict accordance with the approved plan. – the Russian General Staff reported on March 25.

The most important battlefield is the city of Mariupol, the defense of the Azov regiment has cracked in almost all of the districts. Nationalist forces were separated into smaller groups throughout the city. Their main stronghold is the industrial facilities of Azovstal, located in the southern part of the city.

On March 24, the DPR flag was raised over the Mariupol administration building. Chechen forces that are supporting the DPR units in Mariupol confirmed that the entire Left-Bank district, located in the eastern part of the city and separated from the other regions by the industrial zone of Azovstal, was moped up. On March 25, Russian troops claimed that they are approaching the Azovstal facilities from the north-western direction. On March 25, the Russian Ministry of Defence claimed that the Russian grouping took control over the villages of Batmanka, Mikhailovka, Krasniy Partizan, Stavki and Troitskoe, developing their offensive on the positions of the units of the 25th Airborne Brigade of the Ukrainian armed forces to the north of the town of Yasinovataya.

Clashes continue in the town of Maryinka, where the AFU was repelled to the western outskirts. The DPR military reports who are already working on the relatively secured areas in the town, confirm that the AFU established heavily fortified positions in civilian facilities and houses in the private sector of the town. Civilians were expelled from their houses, and residential buildings were used as nodal points for communications and supplies as well as observation points and other types of military facilities.

🇷🇺🇺🇦 And again I can’t get around the topic of imported weapons among Ukrainian nationalists, in Maryinka they are at every turn. pic.twitter.com/DeDrYrDvN5

Looks like very savage house to house fighting in Maryinka near Donetsk. I’ve edited this as there were dead Ukrainian soldiers everywhere in the original clip.#RussianArmy pic.twitter.com/xpEOA7I693

Part 2
Report about the battles between the republican forces and the Ukrainian army in Maryinka.#UkraineRussiaWar pic.twitter.com/21xuXNX6gb

"Grandson" comes from the village. Desired. Staff Sergeant. He has been fighting for 8 years, since Slavyansk.
In our report from Maryinka, "Vnuk" thanks the runaway army of the Armed Forces of Ukraine for the quality of the rebuilt trenches and gives them a tour. pic.twitter.com/dpALW3OVZC

Tankmen and mortarmen of the army of the Donetsk People's Republic🇷🇺 destroy a convoy of military equipment of the Armed Forces of Ukraine🇺🇦 in Maryinka. pic.twitter.com/0WVf47xLDS

No DPR advances were reported near the town of Avdiivka. Clashes continue to the north of the town, in the area of Novobakhmutovka and Novoselka-2, which were taken under the DPR control.

In the region of Ugledar, heavy fighting continues at the Novomikhailovka-Konstantinovka border.

At the same time, the head of the local administration confirmed that the villages of Lyubimovka and Novozlatopol were still under Russian control.

On the LPR frontlines, no significant were reported for several days. LPR forces took control over several small villages on the outskirts of the town of Popasnaya, like Novoaleksandrovka for example. The mop up operation in the town continues. No advances were reported in the Lisichansk and Severodonetsk region. The Russian Ministry of Defence has recently confirmed control over the town of Izyum, the AFU is attempting to counter-attack, but to no avail. The front lines were pushed to the south, to the village of Kamenka.

🔥The Town Hall burned down in Kamenka-Bugskaya🔥

This night in the city of Kamenka-Bugskaya, Lviv region, the town hall caught fire and burned down. The cause of the fire is unknown. #UkraineRussiaWar pic.twitter.com/QKGXFMFTM0

Meanwhile, Russian missiles are striking the AFU military facilities. Today, the main targets are fuel depots all around the country. On the evening of March 24, Russian high-precision sea-based cruise missiles Kalibr struck a fuel base in the village of Kalinovka on the Kiev outskirts. It was the largest of the remaining fuel bases of the AFU, which was used for fuel supplies to the Ukrainian military units in the central regions. Last night, 51 military facilities of Ukraine were hit by the Russian Aerospace Forces.

On March 24, the Kremlin approved the deployment of Russian volunteers in Ukraine. The reinforcement is necessary to continue the advance of the joint Russian, LPR, and DPR forces on the Ukrainian frontlines. It was earlier reported that about 16 000 volunteers from foreign countries, mainly from Syria, could be deployed in Ukraine alongside the Russian military. They are yet to be sent to Ukraine.