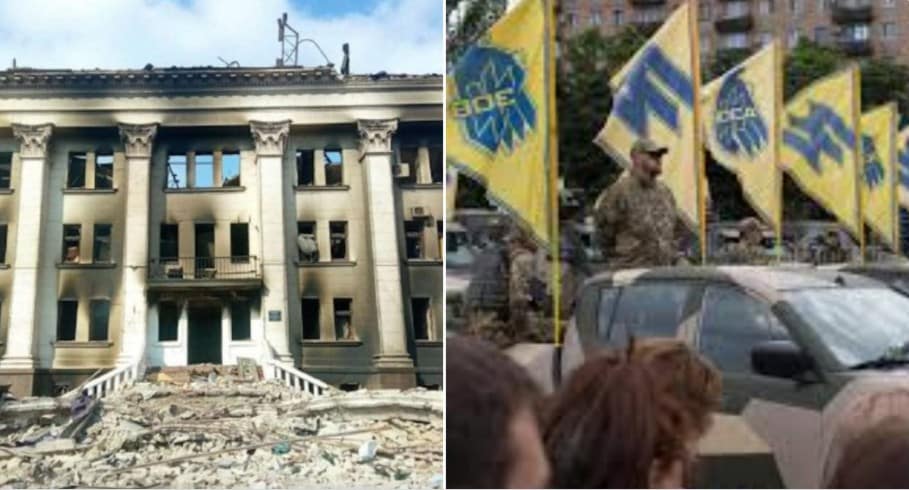 GrayZone.com – It took two days for gangs of Azov and Ukrainian Army to round up to 400 local Russian speakers. They were moved into the Mariupol theatre where explosive charges were laid and it was blown up.  This video is from when the Azov Bn. did the same thing in Odessa in 2014 and they are planning it again, this time they will get every Jew remaining in Ukraine.

A short clip from 2014. Odessa massacre. 48 people were burned alive by fascists in the Trade Union hall in Odessa. pic.twitter.com/UF5kfkiFBT

This war crime and mass murder of women and children was carefully coordinated with NATO-funded “fact-checkers” and “disinformation fighters” from organizations across Europe.  All of these organizations are run by right-wing groups originally funded and trained through Washington “think tanks” and the Israel lobby.

One hundred died instantly, 200 died in the rubble.  There were no rescue attempts allowed as Azov/Ukrainian Army “observers” fired on anyone trying to pull people from the rubble.

Of course this same scenario was played out in 2014 in Odessa.

The Odessa massacre of May 2014: where pro-European and anti-Russian Ukrainian neo-Nazis burned alive dozens of peaceful civilians in a syndicate. It was undoubtedly one of the worst genocides of the 21st century, forming part of the bloody coup of the moment. Justice! 🙏 pic.twitter.com/oori2BMZPm

What the world did not notice for 8 years … On May 2, 2014, a massacre was organized in Odessa to intimidate the pro-Russian population of Odessa. 48 people died. They were burned alive or beaten to death with sticks and iron pipes. 226 people went to the hospital pic.twitter.com/Fo4z7pxv31

You do know who those “defenders” of Odessa are? Odessa massacre 2014. Look it up. pic.twitter.com/442ytPbPvX

By Max Blumenthal for GrayZone

Western media have reported that Russia’s military deliberately attacked the Donetsk Academic Regional Drama theater in Mariupol, Ukraine, claiming that it was filled with civilians and marked with signs reading “children” on its grounds.

The supposed bombing took place just as Ukrainian President Volodymyr Zelensky appealed to US Congress for a no-fly zone, fueling the chorus for a direct military confrontation with Russia and apparently inspiring President Joseph Biden to brand Vladimir Putin, the Russian president, as a “war criminal.”

A closer look reveals that local residents in Mariupol had warned three days before the March 16 incident that the theater would be the site of a false flag attack launched by the openly neo-Nazi Azov Battalion, which controlled the building and the territory around it.

Civilians that escaped the city through humanitarian corridors have testified that they were held by Azov as human shields in area, and that Azov fighters detonated parts of the theater as they retreated. Despite claims of a massive Russian airstrike that reduced the building to ashes, all civilians appear to have escaped with their lives.

Video of the attack on the theater remains unavailable at the time of publication; only photographs of the damaged structure can be viewed. The Russian Ministry of Defense has denied conducting an airstrike on the theater, asserting that the site had no military value and that no sorties were flown in the area on March 16.

While the Russian military operation in Ukraine has triggered a humanitarian crisis in Mariupol, it is clear that Russia gained nothing by targeting the theater and virtually guaranteed itself another public relations blow by targeting a building filled with civilians – including ethnic Russians.

Azov, on the other hand, stood to benefit from a dramatic and grisly attack blamed on Russia. In full retreat all around Mariupol and facing the possibility of brutal treatment at the hands of a Russian military hellbent on “de-Nazification,” its fighters’ only hope seemed to lie in triggering direct NATO intervention.

The same sense of desperation informed Zelensky’s carefully scripted address to Congress, in which he invoked Martin Luther King Jr.’s “I Have A Dream” speech and played a heavily produced video depicting civilian suffering to make the case for a no fly zone.

But Kiev’s most emotionally potent allegation so far – that Russia deliberately bombed innocent children cowering inside a theater – has been undercut by testimonies from Mariupol residents and a widely viewed Telegram message explicitly foreshadowing a false flag attack on the building.

The strategic southeastern port city of Mariupol has been held by the Azov Battalion since 2014. Since its seizure, it has served as a political and military base for the ultra-nationalist paramilitary as it launched assaults on pro-Russian separatists in the breakaway republic of Donetsk.

Gathered from the ranks of extreme-right activists that provided protesters with street muscle during the 2013-14 Euromaidan coup, the Azov Battalion has been formally incorporated into the Ukrainian National Guard by the country’s Interior Ministry. It was founded by the openly fascist organizer Andriy Biletsky, who has vowed to “lead the white races of the world in a final crusade … against Semite-led Untermenschen.”

With the Nazi-inspired Wolfsangel symbol emblazoned on their uniforms and flags, Azov fighters make no secret of their ideological goals. Despite having been identified by the FBI, US Congress, and its own fighters as a neo-Nazi unit, and implicated in an array of sordid human rights violations, Azov has collaborated openly with US and Canadian military trainers.

Having accused Azov of seeking to exterminate the ethnic Russians of Donbas, Putin has marked its base in Mariupol as the front line of his stated campaign to “de-Nazify” Ukraine. Since Russia’s February 24 invasion of Ukraine, the city become the site of ferocious urban fighting, with Russian special forces and Donetsk People’s Republic People’s Militia forces waging a block-by-block fight for control as artillery rained down on Azov positions.

On March 7, an Azov Battalion commander named Denis Prokopenko appeared on camera from Mariupol with an urgent message. Published on Azov’s official YouTube channel and delivered in English over the sound of occasional artillery launches, Prokopenko declared that the Russian military was carrying out a “genocide” against the population of Mariupol, which happens to be 40 percent ethnic Russian.

Prokopenko then demanded that Western nations “create a no-fly zone over Ukraine support[ed] with the modern weapons.” It was clear from Prokopenko’s plea that Azov’s position was growing direr by the day.

As Russia’s military rapidly degraded Azov positions throughout the second week of March 2022, Azov soldiers apparently directed elderly civilians as well as women and children into the wardrobe hall of the Donetsk Academic Regional Drama Theater in Mariupol.

A video filmed inside the dimly lit building on March 11 featured a local man claiming that one thousand civilians were trapped inside and demanding a humanitarian corridor to allow them to escape. Only a small group of civilians could be seen in the video, however.

“I’m begging you to stop all this, give us the corridor to get people out, to get out women, kids, the wounded…” a bespectacled narrator (seen below) declared in the video.

Since Russia launched its invasion, Azov Battalion soldiers have been filmed preventing civilians from leaving Mariupol – even forcing men out of their cars and brutally assaulting them while they attempted to break through the paramilitary’s checkpoints. If testimony from many Mariupol residents was to be believed, Azov had used many of them as human shields.

Ukrainian neo-Nazi in Mariupol tells girl about cancellation of evacuation, “say thank you for not being shot” Azov's battalion hiding behind civilians pic.twitter.com/2ypQwr4t9J

Days before the Mariupol theater incident, chilling warnings of a false flag “provocation”

On March 12, a chilling message appeared on the Telegram channel of Dmitriy Steshen, a correspondent reporting from Mariupol for the Russian newspaper Komsomolskaya Pravda.

According to Steshen, local residents told him an alleged Russian bombing of the Turkish-built Kanuni Sultan Suleyman mosque in Mariupol that day was a false flag intended to “drag Turkey into the war,” and warned that a false flag attack on the Mariupol Drama Theater was imminent.

The Telegram message read as follows:

“Look at what our readers from Mariupol sent us. If the information can be verified, it needs to be highlighted [for the media]:

‘Zelensky prepares two [false flag] provocations in Mariupol!!! One of the [false flag] provocation is against the citizens of Turkey, who hid in the mosque built by Akhmetov, and this provocation has already begun by the Ukrainian artillery gunners shelling the grounds of the mosque, from their positions at [Zinsteva] Balka in Nizhniaya [Lower] Kirvoka. Zelensky was unable to drag the EU, USA, and UK into the war against the Russian Federation. Now, Zelensky is trying to drag Turkey into the war, pinning his hopes on the explosive emotional character and the love the faithful feel for their sacred shrines.

The second [false flag] provocation Zelensky is preparing for use by Western media, after unsuccessful provocation with the [Mariupol] maternity hospital, Ukrainian soldiers, together with the administration of the Drama Theater, gathered women, children, and the elderly from Mariupol in the Drama Theater building, so as to – given a good opportunity – detonate the building and then scream around the world that this was by the Russian Federation air force and that there should be an immediate ‘no-fly zone’ over Ukraine.’”

Steshin’s message recounting the warnings from Mariupol residents has been seen by over 480,000 Telegram users. It is below and can also be viewed here. 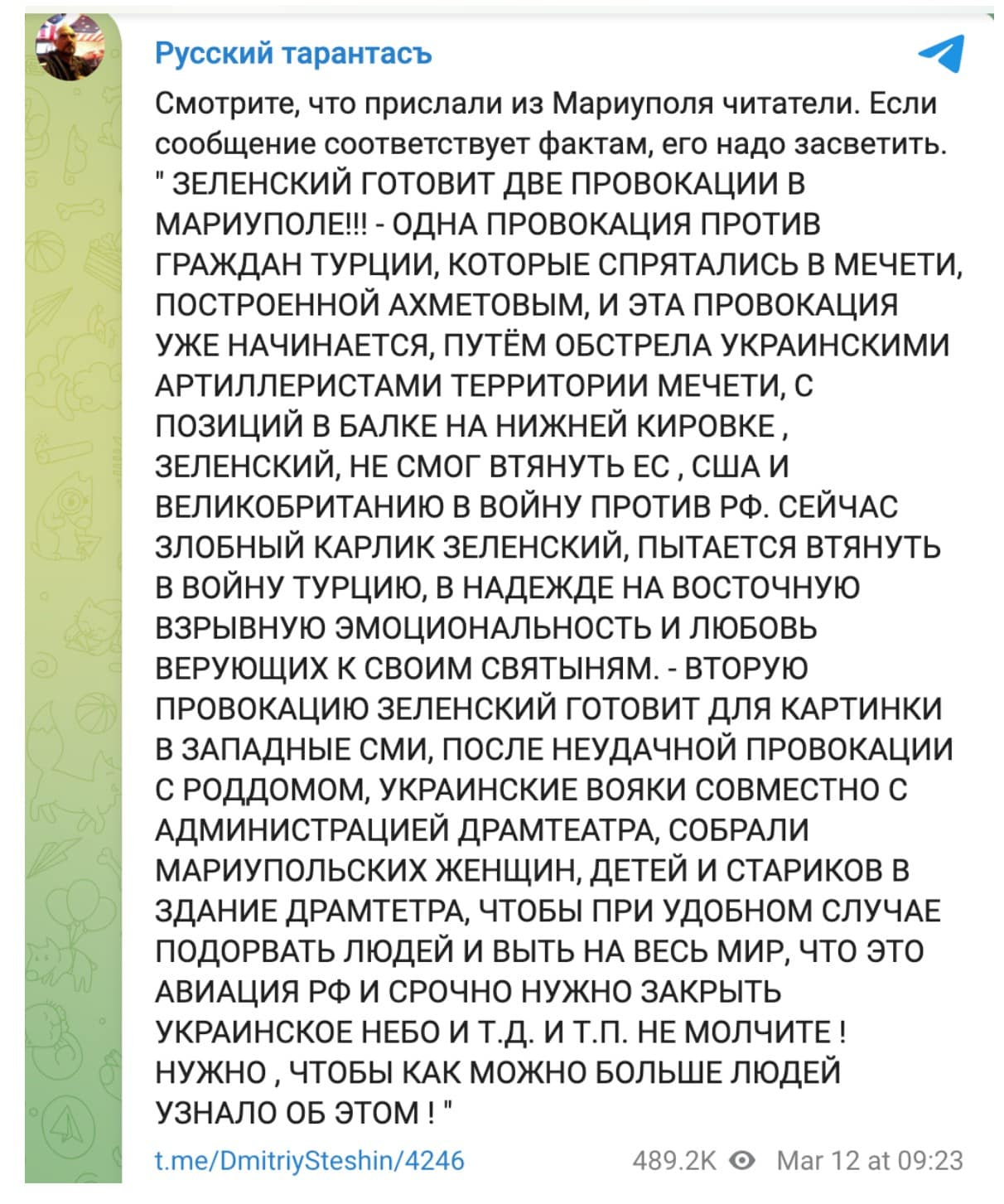 On March 12, Western outlets like the Associated Press repeated Ukrainian government claims that the Turkish mosque in Mariupol had been shelled by Russia with 80 civilians inside, including children.

However, Turkish state media revealed that the Ukrainian government had misled Western reporters. The Kanuni Sultan Suleyman Mosque was not only fully intact, it had never been hit by Russian fire.

Still filled with civilians, the Mariupol theater was next on somebody’s target list.

SOURCETheGrayZone.com
ATTENTION READERS
Due to the nature of independent content, VT cannot guarantee content validity.
We ask you to Read Our Content Policy so a clear comprehension of VT's independent non-censored media is understood and given its proper place in the world of news, opinion and media.