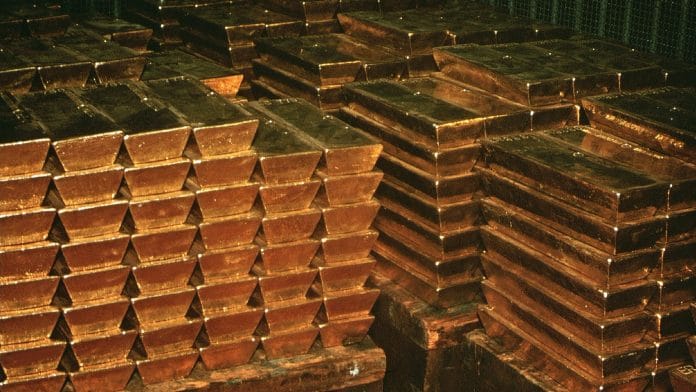 Interfax – All gold from Russian foreign exchange reserves is stored domestically, in the vaults of the Central Bank of Russia (CBR), according to an updated list of questions and answers on the website of the regulator.

The Central Bank has denied information about its withdrawal of gold from Russia. “This is not true. All gold from our foreign exchange reserves is in CBR vaults in Russian territory,” the regulator said.

The CBR admitted at there is no way to avoid the blockage of part of reserves in dollars and euros. “Non-cash currency is always reflected in correspondent accounts in foreign banks and therefore can be frozen,” the Central Bank said.

Earlier, Russian Finance Minister Anton Siluanov said that sanctions have deprived Russia of access to $300 billion of its reserves (almost half of $640 billion).

In late February 2022, a number of Western countries imposed sanctions on transactions with the Russian Central Bank and the Ministry of Finance, limiting Russia’s ability to use part of its foreign exchange reserves. The day before, OFAC (a division of the U.S. Treasury Department) explained that transactions with gold from Russian reserves were subject to previously adopted sanctions.

The Central Bank said that since 2014 it has factored not only traditional financial risks but also geopolitical risks when formulating its policy.

During a conventional financial crisis, there is a need for reserves in the currencies of countries with which Russia is actively trading and in which the debts of companies, banks, and the state are denominated. These currencies are predominantly U.S. dollars and euros, the regulator said.

To withstand a geopolitical crisis, there is a need for reserves that cannot be affected by sanctions from Western states. “That is why the Bank of Russia has increased the share of gold and the Chinese yuan to almost half of its reserves in recent years,” the Central Bank said.

“These types of crises require fundamentally different reactions, and affect the economy differently, but can be quite large-scale. That is why the Bank of Russia has seriously increased its reserves since 2014. They are now much higher than those of other countries with comparable economies.

This was done precisely because the Bank of Russia took into account that if a financial crisis occurs, it will not be possible to quickly use gold and yuan – these assets are not very liquid. And if there is geopolitical risk, then there will be limited opportunities to use reserves in U.S. dollars and euros, which means that we need sufficient reserves in alternative assets,” the regulator said.