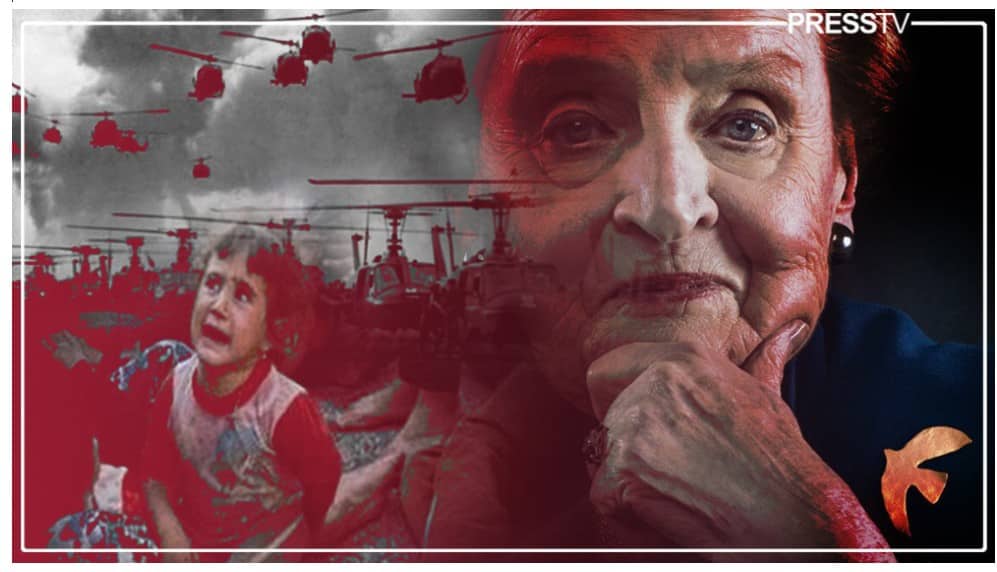 PressTV – Madeleine Albright is dead and no right-thinking person will mourn her passing. The first female US secretary of state and former US ambassador to the UN, Albright’s legacy will forever be dominated by her barbaric defense of infanticide during a 1996 interview in which, when on the subject of over half a million Iraqi children dying as a result to US-led UN sanctions, she was asked if the price is worth it, Albright said: “I think this is a very hard choice, but the price, we think the price is worth it.”

Such casual cruelty and callous disregard for the lives of Iraqi children was and remains completely in keeping with the cruelty and barbarism of a Washington-led empire that has been a brake on human progress and development for far too long.

Yet, though Albright’s rebarbative defense of infanticide may have guaranteed her a first-class ticket on a rocket ship to hell, going by the lamentably predictable gushing tributes to her legacy which have emanated from Washington, London, Brussels, etc., you would think that she died a martyr for women’s rights and decency. If anything, it comes as further evidence of the chasm which separates servants and apologists for empire from its countless victims and casualties. It also leaves us in no doubt that we in the West are led by men and women for whom brutality is a virtue and compassion a vice.

The sanctions imposed on Iraq for 13 years between 1990 and 2003 were positively medieval in scope and in their impact on Iraqi society. A 1998 analysis of this impact, produced by the UK charity Emergency Nutrition Network, revealed that as a direct consequence:

We could go on, but by now you get the drift: the sanctions imposed by the UN Security Council on Iraq under the auspices of UNSC Resolution 661 – and heartily defended by Madeleine Albright – constituted a crime of such historic magnitude it would have shamed Genghis Khan. Indeed, so cruel and punitive were the sanctions on Iraq that not one but two UN aid coordinators appointed to Iraq – Dennis Halliday and Hans von Sponeck – resigned in protest.

Albright’s legacy, it should be pointed out, is not completely dominated by her stance on the killing of Iraqi babies and infants. She has a river of Yugoslav-Serbian blood on her hands too, given the fanaticism with which she pushed for the NATO bombing of Yugoslavia in 1999. Washington and its allies did so, let us not forget, without bothering with the inconvenience of seeking UN security council approval beforehand, knowing in advance that Russia and China would veto any such proposal.

The grim result was that for 78 days, between March 24 and June 10, 1999, NATO aircraft pounded both military and civilian targets, including bridges, power plants, water processing plants, the headquarters of Yugoslavia’s state-owned broadcaster in Belgrade, and even the Chinese Embassy. It was the first time Belgrade had been bombed from the air since the Nazis bombed the city in 1941 over its status as a key locus of Yugoslav resistance to German occupation.

By the end, Serbian authorities estimated that 2,500 people had been killed with a further 12,500 injured. In addition, 25,000 houses and apartment buildings were damaged and 470 km of roads and 600 km of railway were destroyed.

Not for nothing was this military demarche under the flag of NATO described as “Madeleine’s War”. She was its most zealous advocate within a Clinton administration that was chock-full of liberal interventionists – expensively clad people for whom morality was measured not in championing the virtues of peace but in pushing for war. In Albright’s case, this was confirmed during a 1993 meeting she had as Washington’s UN ambassador with head of the US military at the time, Colin Powell.

In response to Powell’s argument that military action should only be taken after a clear political goal had been set, Albright came back at him with the following gem: “What’s the point of having this superb military that you’re always talking about if we can’t use it?”

Madeleine Albright goes to her grave at age 84 one of the most notorious war criminals of the modern era. That Barack Obama saw fit to present her with a Presidential Medal of Freedom in 2012 was no surprise. After all, they do say that it takes one to know one. Arriving in America as a child refugee from war-torn Europe in the 1940s, Albright rose through the ranks in Washington to become one of the most servile apostles of US hard power, responsible thereby for creating countless war refugees in turn.

If only Western ideologues did get the irony, the world would be a far better place.

About Author: John Wight is an author and political commentator based in Scotland.