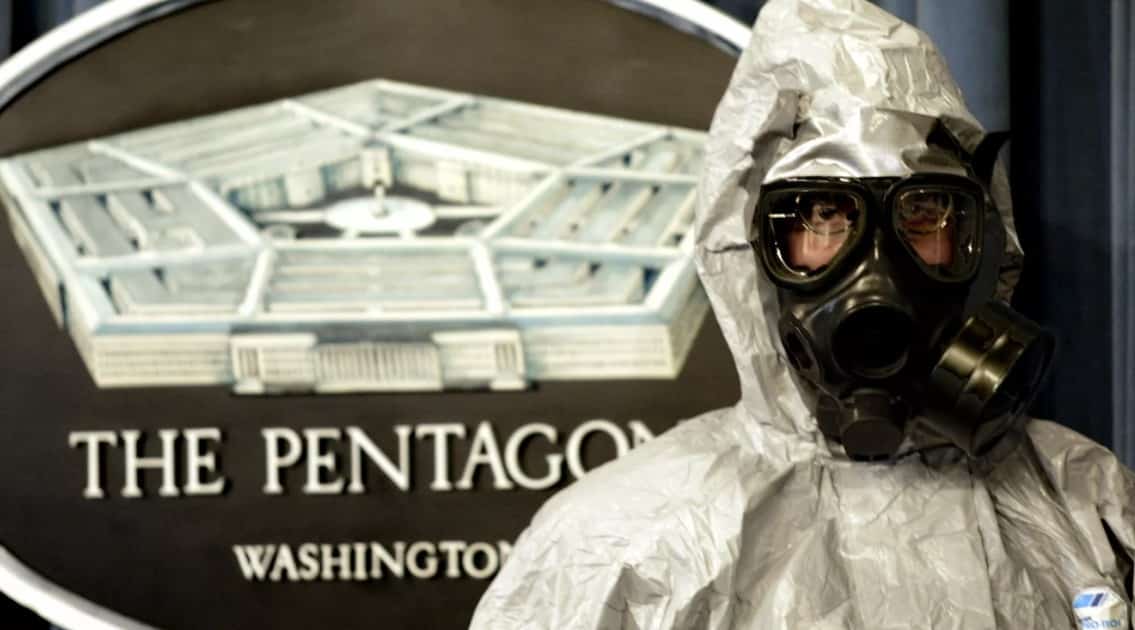 SputnikNews – The Russian Ministry of Defence on 24 March presented new evidence that Ukraine was involved in bioweapons research, revealing that President Joe Biden’s son, Hunter, funded the Pentagon’s military biological program in Ukraine via the investment fund Rosemont Seneca. Will the US media and justice machine step in to investigate the matter?

“US presidents seem to get away with a lot, as long as the so-called Military-Industrial-Counter-Intelligence-Media-Academia-Think Tank complex (MICIMATT) is behind them”, says Retired US Air Force Lt. Col. Karen Kwiatkowski, a former analyst for the US Department of Defence. “The FBI Hunter Biden laptop cover-up lasted for over two years. If the Ukrainian Biolabs are destroyed or cleaned up without incident, I expect this story will be memory-holed for longer than that”.

The fact that the US was developing components of biological weapons in Ukraine has been largely ignored by international watchdogs, while Washington vehemently denied any involvement whatsoever in the program, branding it a “Russian conspiracy theory”.

However, Under Secretary of State for Political Affairs Victoria Nuland on 8 March told US senators that “bioresearch facilities” in Ukraine actually exist, while a 2010 BioPrepWatch article preserved in web archives and the US Armed Forces’ Counterproliferation Centre confirmed that America had maintained bioresearch cooperation with Kiev since 2005.

The Russian Ministry of Defence has held a number of presentations revealing the depth of the US bioweapons program in Ukraine run by the Pentagon’s Defence Threat Reduction Agency. At least 31 laboratories across 14 settlements are suspected of being involved in US-funded military biological activities.

The Rosemont Seneca investment fund, co-founded by Hunter Biden, participated in the funding of Ukrainian Biolabs in cooperation with Metabiota, a subcontractor to the Pentagon’s principal contractor Black & Veatch, according to the Russian MoD. Metabiota and Black & Veatch are known as major supplies of equipment for Pentagon bio laboratories around the world, the MoD specifies. 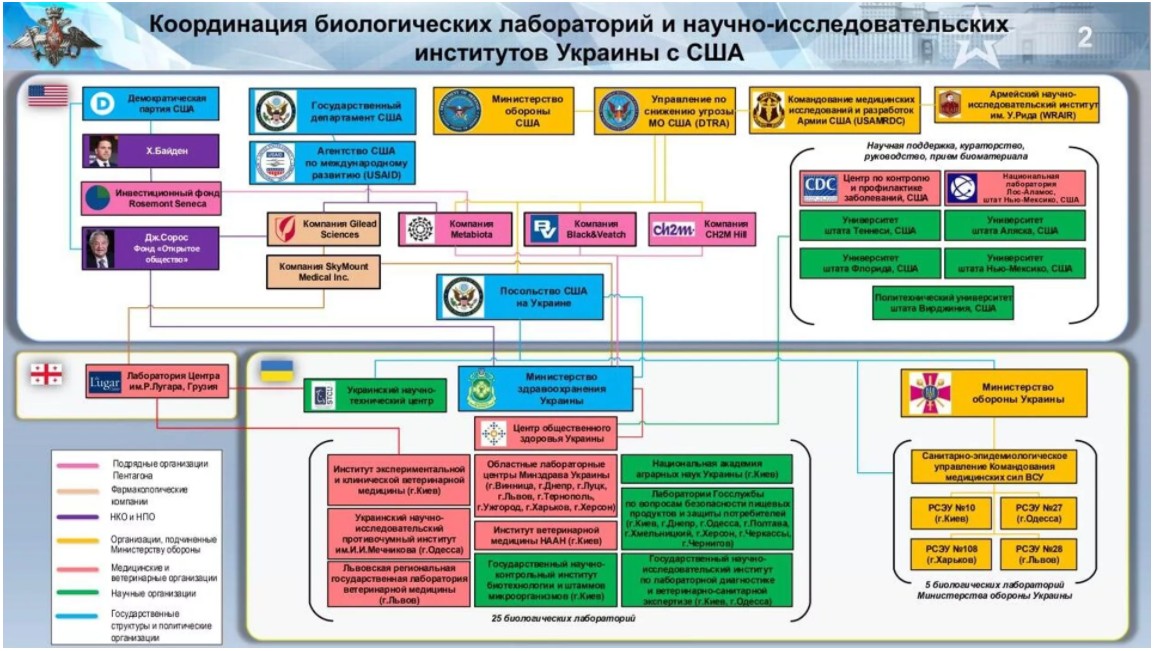 Russian Defence Ministry presentation detailing coordination between Ukraine-based labs and US agencies and companies, including Hunter Biden and George Soros (far left), the US State Department, USAID, Gilead Sciences, SkyMount Medical, Metabiota, Black&Veatch, CH2M Hill, the US Embassy in Ukraine (center) and the CDC, the National Laboratory at Los Alamos and the universities of Tennessee, Alaska, Florida, New Mexico and Virginia (right). Below, ties are shown to the Lugar Center in Georgia, the Ukrainian Ministry of Health and associated centers and institutes, and the Ukrainian Defence Ministry’s epidemiological departments. 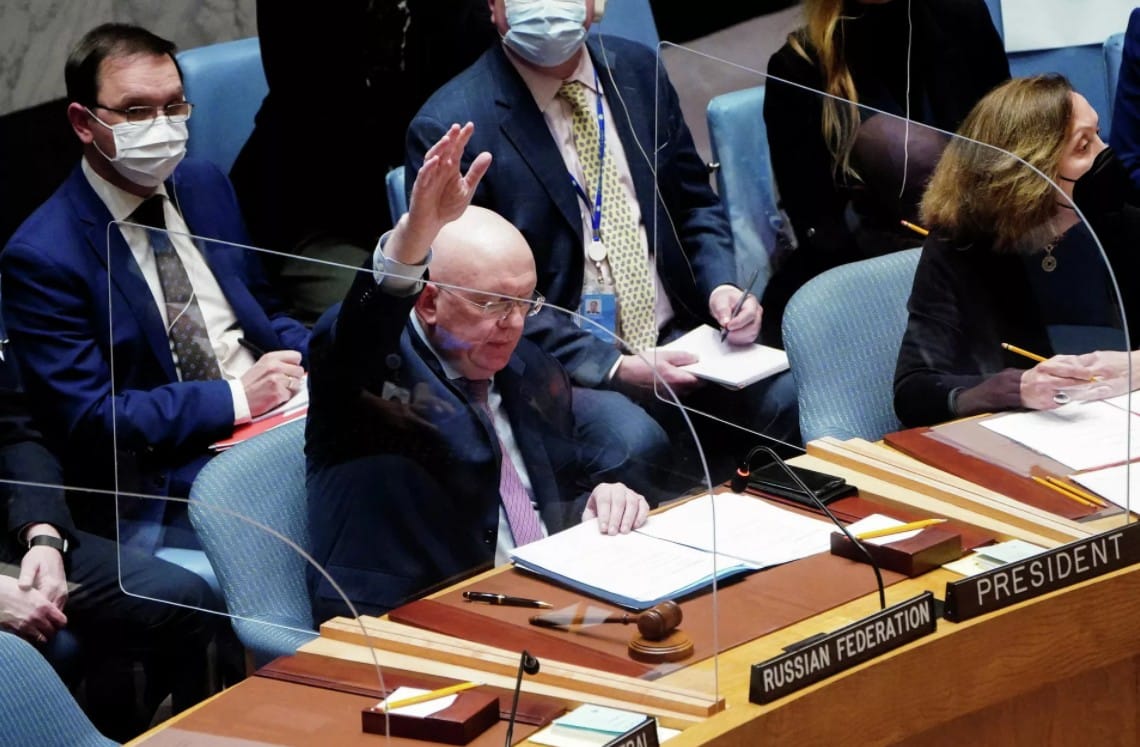 According to Kwiatkowski, major mainstream sources are likely to suppress the story as major US defense contractors are heavily investing in American mainstream media. The former Pentagon analyst notes that judging from surveys, 90% of US mainstream media personalities, reporters, and publishers are politically Democrats, which makes it almost impossible that they would attack the Democratic administration and key politicians.

Yet, the Daily Mail – a media outlet belonging to Australian-born US media mogul Rupert Murdoch – reported on 25 March that the Russian MoD’s findings are “at least partially true”. According to the media outlet, the emails from Hunter’s laptop “show he helped secure millions of dollars of funding” for Metabiota, a Department of Defence contractor which worked in Ukraine, specializing in research on pandemic-causing diseases “that could be used as bioweapons”.

Per the media outlet, Hunter Biden and his business partners invested $500,000 in Metabiota through their firm Rosemont Seneca and raised several million dollars in funding for the company from investment giants including Goldman Sachs. The Daily Mail also quotes US government spending records indicating that the Pentagon awarded a $18.4 million contract to Metabiota between February 2014 and November 2016, with $307,091 earmarked for “Ukraine research projects”.

Former senior CIA officer Sam Faddis, cited by the Daily Mail, notes that even though the Pentagon insists that there’s nothing nefarious occurring in Ukraine and the Biolabs are simply focused on pandemic early-warning research, “we don’t know for sure that’s all that was going on”.

The Pentagon has good reason to conceal the truth as it could have potentially violated the Biological Weapons Anti-Terrorism Act (BWATA) of 1989, according to Francis Boyle, a professor of international law at the University of Illinois College of Law who drafted the law in question.

“There’s no alternative for them but to lie because under my Biological Weapons Anti-Terrorism Act they all face life imprisonment for setting up these laboratories and funding them in Ukraine”, Boyle says. “Under my law, the punishment is life imprisonment for any US citizen or resident to get involved in research, testing defense, stockpiling biological weapons anywhere in the world”.

Boyle expresses skepticism about the possibility of the Pentagon being held accountable. He recalled that he was the first one to blow the whistle that the anthrax attacks of October 2001 came out of the US Biological Warfare Weapons Lab and program.

“I did that at a conference at Harvard Divinity School on November 1, 2001, and I gave a couple of interviews and an order was given”, he says. “And I was never interviewed again by any Western news media source, and the United States government is still lying about the origins of that attack. And they’ve covered up and they’ve gotten away with it”.

It May Take Years Before Bioweapon Scandal is Probed

If the news becomes too annoying for the Pentagon and the US government they will find ways to divert public opinion with something “more newsworthy”, according to Michael Springmann, former American diplomat and political analyst.

Now Washington may try to shift the focus by calling for international peacekeepers to enter Ukraine, according to Springmann. “That would divert attention and then paint the Russians again as aggressors who won’t let poor, innocent peacekeepers into the country to ensure that Ukraine will do what the American government wants it to do”, he suggests.

Meanwhile, one shouldn’t delude oneself into believing that the United Nations – which has repeatedly declined to investigate the issue of the US-funded Biolabs in Ukraine – would step forward and call for a new inquiry, according to the observers.

“The United Nations is under the control of the United States”, says Springmann. “Its headquarters sits in New York City and the United States supplies a good chunk of the UN’s budget, and it has a great control over its membership by promising aid or withholding aid or benefits or other things that might be useful to a foreign country”.

“The independent, international, and private communications of millions of people do pick up on more objective news, and people of all political persuasions simply do not want to be associated with biological warfare or pentagon bio-labs”, Karen Kwiatkowski says. “This undertow of concern about biological warfare specifically will continue to grow, and gain attention, until several years from now, The Washington Post, New York Times, and CNN-ABC-NBC-CBS will finally report it”