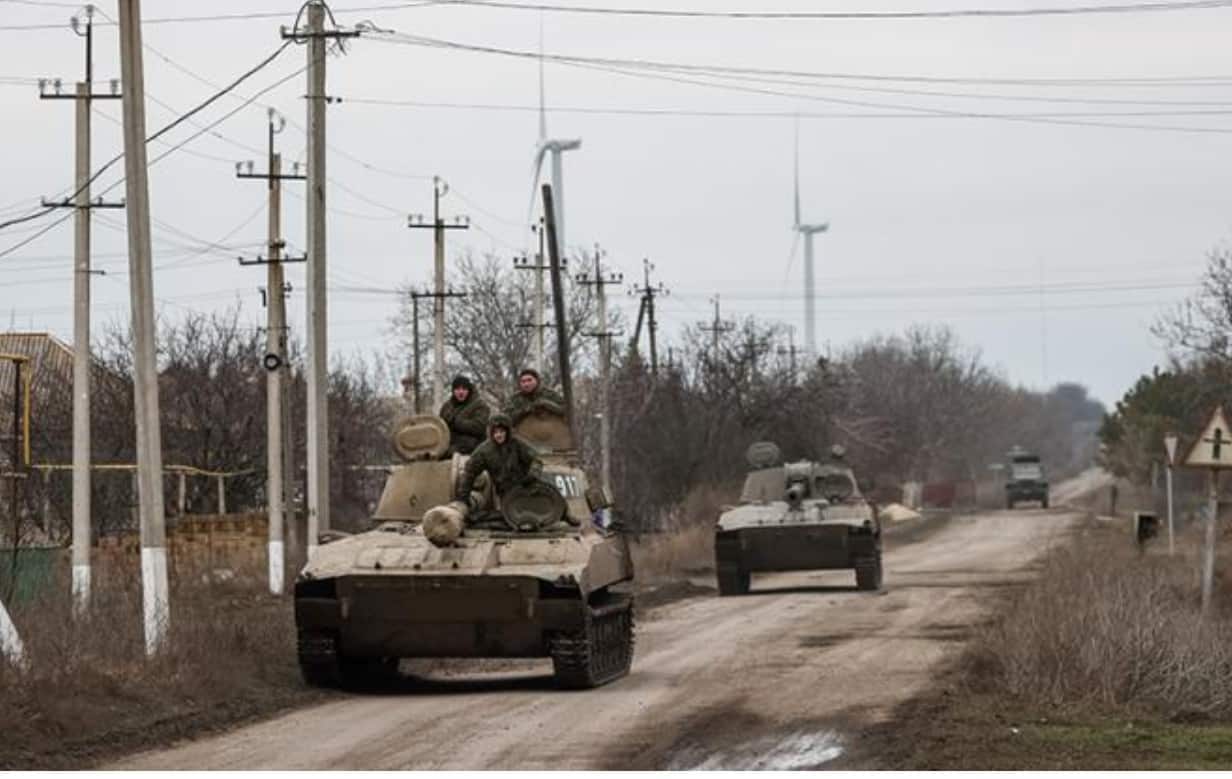 SV Pressa – The Russian special operation in Ukraine to protect the republics of Donbass continues for the third week. At the same time, it has long gone beyond the Donbas itself, but the capital of the DPR is still under shelling, and a significant part of the Ukrainian group remains in the occupied territories of the republics, which is not going to lay down their arms.

Experts talk about the formation of several “boilers” in the Donbass at once, but when will their methodical destruction begin? Apparently, dill has a lot of ammunition, fuels and lubricants, and medicines. They can always requisition food from local residents, who cover themselves as a “human shield”.

It is understood that the allied forces of the Russian Federation and the LDNR are in no hurry to storm large cities in order to avoid serious losses. How critical is the current situation for the Ukrainian military?

– The situation in the Donbass today is diametrically opposed to what it was in 2014, believes Sergei Shvedko, a journalist from the Azov region.

“Now the troops of the DPR and LPR are advancing, and the Armed Forces of Ukraine are either retreating or falling into the “cauldrons”.

It is difficult to say exactly when the enemy troops will be finally driven out of Donetsk soil. In the LPR, this will happen faster: it remains to free the Severodonetsk-Lysichansk agglomeration there. Although this case is daunting, given that Ukrainian soldiers are hiding behind civilians.

An even more difficult task is the liberation of such a large city as Mariupol, were, moreover, the most important Nazis of Ukraine from “Azov” * settled down. It is reported that the city garrison today has 3-5 thousand soldiers. Very impressive numbers. So the DPR soldiers have a lot of work to do. Military correspondents on the front line report that the process of liberating the city may take ten days.

Naturally, surrounded by enemy units have a hard time. But I think they prepared for the siege. And with provisions, they have a relative order. The trouble is that for the civilian population, which the militants are holding hostage, a humanitarian catastrophe is already coming. Therefore, I believe that military operations to liberate these settlements will, as far as possible, be forced. To save as many civilians as possible, who are otherwise simply doomed to starvation.

“If you look at the situation as a whole, about 60-70 thousand military personnel, soldiers of the National Guard, and nationalist battalions turned out to be in the “boilers,” says Alexander Matyushin, leader of the Russian socialist movement in Novorossia.

– The largest “cauldron” is the so-called. “Donbas pocket”, which is being formed between the troops of the LPR from the east, the troops of the Russian Federation, entering from the north, from Kharkov, and the troops of the DPR – from the south. I think it’s a matter of a few weeks when its “lid” will finally slam shut – only it seems to be about 50 thousand people. Apparently, such large cities as Severodonetsk, Lisichansk, Slavyansk, Kramatorsk will not be taken by our troops right off the bat. They will be “flowed around” and gradually squeeze out the enemy from there.

We are now seeing another large “cauldron” in the Mariupol region, where not only the military personnel of the Armed Forces of Ukraine but also the Nazis from “Azov” settled down. This is a grouping of about 3-5 thousand people, which is systematically cut off from communications and will be destroyed. There is also a “Kharkov cauldron”, “Sumy cauldron”, which also hit a large number of military personnel and paramilitary units.

SP: How long will they last? Products can be requisitioned from locals. What about ammunition? What about medicines? What about fuel?

– It is hard to say. They pulled a lot of ammunition to the Donbass. Despite the fact that the Russian Air Force regularly destroys military bases, they still have a considerable amount of ammunition. As for fuel, this is a serious issue, since neither Russia nor Belarus supplies them with oil products. And from Europe, as we see, “fuel” also does not reach.

In Ukraine, there is now a large deficit and prices have skyrocketed – gasoline already costs about 150 rubles, or even higher, if taken in ruble terms. The situation is the same with diesel fuel. The situation is reminiscent of what happened in 1944-45. when the Soviet army cut off the oil-bearing regions of Romania, which deprived the German army of fuel for its mechanized units.

At that time, all their fuel went to the needs of the Wehrmacht, so that the tank divisions could somehow move. It is rather difficult to say how much it is possible to arrange supplies from Europe, I think that all these communications will simply be cut off by the Russian army.

As for medicines, they are almost gone. They still exist in Western Ukraine, but even there they are simply “swept away”. As for food, in those cities that fell into the “boilers”, it is gradually running out. Plus, in the conditions of looting, Mao‘s statement that the rifle gives rise to power confirms its correctness. And now the one who is armed is fed. But soon the situation in the surrounded cities will resemble phantasmagoric pictures from Mad Max.

I hope that most of the Ukrainian servicemen and fighters of the paramilitary formations will still surrender when they understand the futility of further resistance. Some parts, of course, will be destroyed, someone will try to make a breakthrough, if they fail, they will either die or be captured.

After sifting and filtering, some people will return to their homes – to peaceful work, those who were involved in war crimes will have to bear responsibility.

– The Armed Forces of Ukraine, preparing for an attack on the Donbass, and we know that they were preparing, proceeded from the reliance on the so-called. “Knots of resistance,” says Ivan Konovalov, director of the Center for Strategic Studies.

– These are not necessarily large cities, these are points of strategic importance. Such as Volnovakha, which lasted almost two weeks. Plus, in support of these units, armored mechanized groups were formed. But they ended up trapped in these knots.

If you list them, then these are Mariupol, Kharkiv, Volnovakha, the Avdiivka region (there is a serious grouping of artillery, which has convenient positions for shelling Donetsk and Gorlovka, but it is also blocked), the Nikolaev region – there is also a serious grouping, Chernihiv, Sumy.

But this plan was initially doomed, the result was the formation of several “boilers” at once. And there is no place to wait for reinforcements, except perhaps for Nikolaev.

However, they use the “silence mode” to pull people, weapons, including anti-tank systems and grenade launchers, and even humanitarian corridors are used for this. But this cannot go on for long.

“SP”: – How many days, in your opinion, can this siege last?

– A frontal assault on these nodes will lead to a large number of victims, and it is counterproductive. We are talking not only about the lives of civilians but also about the lives of our servicemen, servicemen of the NM of the DPR, and LPR. The goal is to save as many lives as possible. So some more time is needed. The only work plan is a gradual cleansing, like in Volnovakha, but in this case, it took about 8 days, they fought seriously there.

So giving forecasts by the day is a thankless task. In any case, all this is a matter of the very near future.

– Several thousand Azov militants and other units of the National Guard settled there, plus the remnants of the Armed Forces of Ukraine, the 36th and 56th brigades. All of them are now connected by street fighting in Mariupol.

In these battles, they use the tactics of ambushes and traps: they shoot from above, from rooftops, from around the corner – because of this, the battles take on a fierce character, which affects the number of losses and the pace of advancement. While ours continue to advance, but it’s too early to talk about success.

But we can talk about success in the Volnovakha direction – this is the city of Volnovakha itself and the surrounding villages, the cleansing of focal resistance continues there. The enemy runs towards Ugledar, where they are going to continue fighting. Since there are no serious fortifications of the Armed Forces of Ukraine, and it will be very difficult to create them in a short time, they will use the same tactics as in Mariupol, i.e. build a “human shield” from the local population. But, perhaps, they will not have time to either gain a foothold or create firing points, and leave further.

“SP”: – What do they have with provisions? Ammunition?

“In addition to taking food from the locals, they are engaged in looting, opening stores. I think that wherever they retreat, they will do the same. It should be noted that in the same Volnovakha they had serious fortifications, reaching a depth of three floors, but many ukrovoyaks clogged into the private sector and hid there, leaving scorched earth behind: they burned houses, farms, equipment, grain – the damage was very significant. They did not take into account any damage, they destroyed infrastructure facilities – substations, water conduits – i.e. They tried their best to make people’s lives worse. Considering that it is now up to 10 degrees of frost at night, one can imagine what hell was going on there.

Given the discord that is now happening in Ukraine, the destroyed bases, oil storage facilities, they have serious problems with logistics, even despite the fact that not all roads are under the control of the forces of the republics and Russia. Just yesterday, Russian attack aircraft attacked them in the Maryinsky district, plus massive art support from the DPR, including the Uragan MLRS, the Msta self-propelled guns – this suggests that the remnants of their fortified area are trying to smash, sow disorganization.

Every day our artillery exhausts the enemy, who has less and less strength left to fully snarl. So soon the shelling of Donetsk will stop corny because they run out of ammunition, and serious damage will be done to their fortifications.

Plus, it should also be noted that the enemy has problems with communication, not only with encrypted but also mobile, i.e. they have less and less able to coordinate their actions.

* Images of chevrons of the Azov Battalion, recognized as extremist by the decision of the Frunzensky District Court of Vladimir on November 30, 2015, and included in the Federal List of Extremist Materials under item 3269.