Please show care and respect as you go through these unsorted refugee accounts of the crimes committed against them in Mariupol.  There are no reports on twitter of Russian crimes, only Azov and some against the Ukrainian Army. 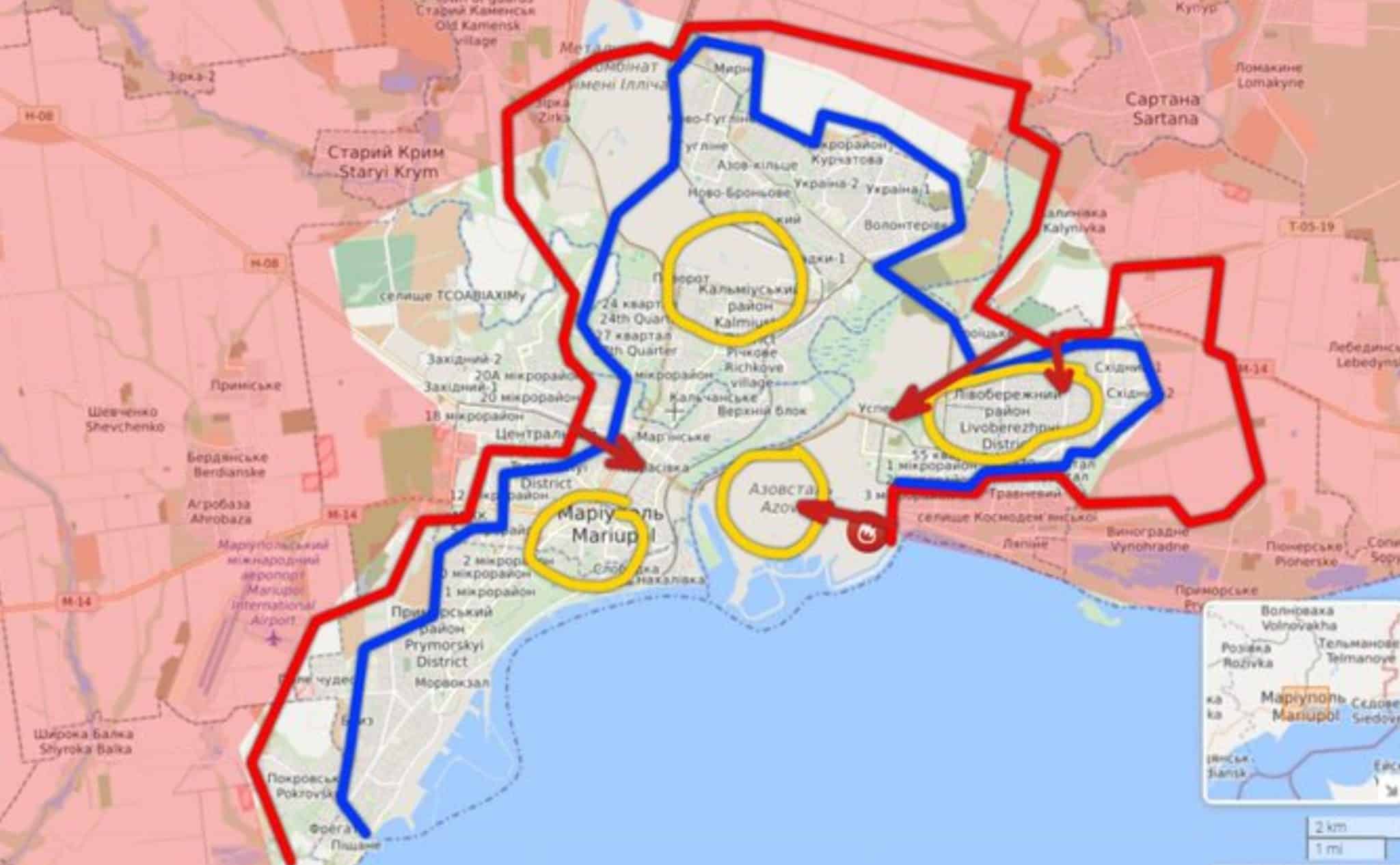 Look at the faces of the victims, hear their voices, listen to their cries and just see how many of these are Facebook influencers/models/crisis actors like those the US media is peddling.

NATO and the MSM is now trying to silence the Ukrainian people who have been held hostage by a Nazi dictatorship for 8 years. The number of stories here are undeniable and there are thousands more…every single refugee says the same thing, Mariupol is hell on earth with the Ukie Army…sometimes killing civilians and Azov killing Ukrainian Army who try to surrender, shooting civilians, and this has been going on for weeks now.  Oh…and this:

with Azov beyond heavy decline, ratlines of post-WW2 may reopen for business

glory to the heroes 😃 pic.twitter.com/TBvogKQeWd

Behind this..what supported the Azov Bn and their masters in Tel Aviv…and that’s the trafficking of children for sex to Israel, the UAE, Saudi Arabia, Germany, Britain and the United States.

Residents of Mariupol demand to organize a tribunal against Mayor Boychenko for preventing the departure of people, in fact leaving the residents of his city hostage to the Nazis from Azov. Boychenko himself safely escaped from Mariupol a month ago….

The Biden Administration wants to allow 100,000 “Ukrainian Refugees” to enter the US. How can we be certain none of them will be AZOV Battalion? What if they came to the US and joined Police Departments?@TheBlackCaucus #Ukraine️ #FBA@POTUS #UkraineRussiaCrisis pic.twitter.com/X8gMbxHQb5

Ukrainian girls fill the world’s brothels, sold into slavery by the Nazi units organized and trained by Turkish Grey Wolves and Israeli Mossad, organized by Zelensky and his Jewish oligarch friends who decided to cleanse Ukraine of its people before recreating the homeland of the Khazarian Mafia.

None of this would be possible without the paid whores of the American, Canadian, British and German media.

This is the truth the West hides from the public. Dozens of videos with civilians confirming it: Azov uses them as a human shield and PREVENT them from leaving Mariupol. This is on purpose. I added subtitles to this recent video going viral: https://t.co/uPs84L2ciA pic.twitter.com/drflBvW50C

“A refugee from Mariupol said that militants from Azov nationalist battalion, while retreating, blew up the city drama theater, where there were civilians, whom they used as a human shield.
The militants deployed military equipment near bomb shelters and residential buildings.” pic.twitter.com/Io2pE6wCVC

Refugees from Mariupol about Azov regiment and Ukrainian army. pic.twitter.com/oRhpNHqKGB

'We hate Ukraine' refugees from Mariupol about Azov and Ukrainian army. pic.twitter.com/KU40lm0Ict

Yekaterina Polozova, a refugee from Mariupol, says: “They shot at us, it was Azov who shot, Azov, I personally saw it. I saw it, let the whole world know, Azov and the Right Sector just killed civilians, for no apparent reason! pic.twitter.com/kcRmmHFaBe

As DPR and Russian Federation units occupy Mariupol, more and more eyewitness accounts of AFU war crimes appear. This content is deleted from MSM social media such as Facebook, Instagram, Twitter, etc. We will continue to provide such video testimonies with English subtitles or with a voice-over narration.

A #British refugee from #Mariupol: #neonazis from #Azov opened fire on #Ukrainian soldiers who wanted to surrender because of hopeless situation.#Ukraine pic.twitter.com/6sJlXMs0Wx

We encourage our readers and viewers who are willing and able to translate and voice-over such videos in English to email us: info@southfront.org and southfront@list.ru (it is better to write to both emails).

A refugee from #Mariupol on #Azov and #Ukrainian military human shield tactics.#Ukraine pic.twitter.com/XoTBYyEFhS

Horror stories about #Azov crimes in #Mariupol from refugees.#Ukraine pic.twitter.com/Ggj5hNZ1C3

https://t.co/jq4eYrWZJA
“85% of the damage to the city was caused by the Azov people"
From civilian refugee in Mariupol.

“While conducting a humanitarian mission near Sartana, we encountered a large number of people who had just fled Mariupol. Among these civilians was Nikolai, who agreed to tell us in front of the camera what happened with the Mariupol maternity hospital and theater, as well as how the fighters of the Azov regiment behaved with the locals.”

:28 “There is a large underground passage, they are there.”

“They go looking for girls.

They ask: How old?’  Then they take them underground.

I don’t know what they were doing with the girls. In fact, the whole world knows what they do to kids.

“But luckily her father came and got her out of there, otherwise they would have taken her there too.”

“They lure them with something and it’s over!”

A que of refugees from #Mariupol near Vasilyevka (Zaporozhye region). There is a traffic jam at the checkpoint – a check is underway to identify of the Armed Forces of Ukraine and "#Azov" who In disguise as civilian or women's in order to break into #Ukrainian territory. pic.twitter.com/z5XWnQoy7B

🇷🇺🇺🇦⚡️The flight of "Azov" is covered by a sniper working on civilians. Their retreat is covered by well-trained snipers. Azov snipers often open fire on civilian vehicles and groups of refugees trying to get into the neighborhoods liberated by the DPR and the Russian Federation. pic.twitter.com/o7ewytZaiJ

@pierrejovanovic
1/3
The soldiers of Azov battalion killed my son, injured my grandson then changed into their clothes and left. – tells the refugee Nadezhda Vladimirovna from Mariupol to the Donbass channel journalist.
According to her, the soldiers killed her son and injured pic.twitter.com/3rUI9ZnXBc

A transport convoy with refugees from Mariupol near the city of Vasilevka
There is a big traffic jam at the checkpoint — the Russian military is checking for identification of AFU soldiers and Azov fighters dressed in civilian clothes*.
* banned in the Russian Federation pic.twitter.com/HC3AoCZuqu

#Russia is losing info war to #US and the West. 24/7 All TV networks show videos, interviews and all blame is directed against Russia for bombing of residential areas, schools, hospitals, for creating major refugee crisis in Europe. US broadcasts interviews of Azov nazi soldiers. https://t.co/bIq1eLztw6

– Did '#Azov' [a neo-Nazi organisation banned in Russia] take food for free from shops or buy it?
– There are no shops.
– Well, when else were there?
– They did not buy anything.
– Did they take away cars?
– They say they did. pic.twitter.com/pBPfxt55Y4

It's amazing how many refugees one can fit in a BTR.
These civilians have just been rescued from Mariupol, where they were held captive as human shields by the Azov group. Some were trapped in their basements for weeks while Ukr. army units occupied their buildings as defences. pic.twitter.com/rrP0y95Ktf

Why choose this video when there are so many testimonies from Mariupol refugees saying exactly how they were held and how brutally Azov behaved toward them! https://t.co/sbtK3qdyhy