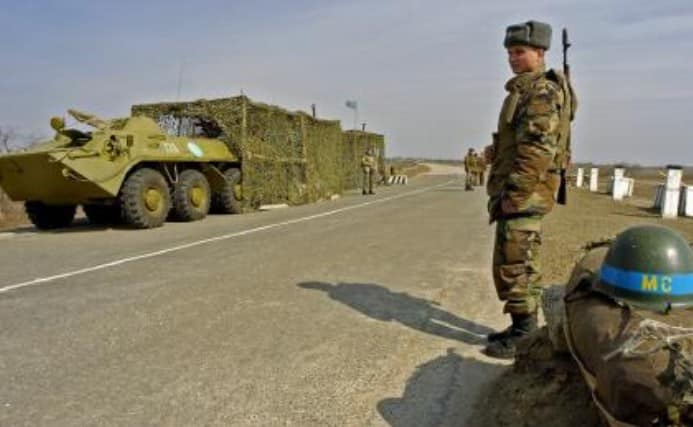 SV Pressa: In recent days, a special military operation is ongoing in Ukraine, there has been a lot of talk about the future of the country after its completion, demilitarization and denazification. Against this background, the question arises – what about Pridnestrovie? After all, the region actually receives a corridor connecting with Russia. Will this affect the question of his status?

We must understand that it is one thing when hostile Ukraine separated us from Pridnestrovie, and another when the unfavorable factor separating us has been eliminated. And we are talking, first of all, about practical aspects – about supplying the Operational Group of Russian Forces stationed there in Transnistria.

Recall that there is now a Russian peacekeeping contingent, including units guarding ammunition depots in the village of Kolbasna.To date, after numerous reductions, the grouping consists of two separate motorized rifle battalions performing peacekeeping tasks, replacing each other a year later, as well as a security and maintenance battalion with a total strength of about 1,700 military personnel.At the same time, it must be understood that the Russian grouping in Transnistria does not have a strike orientation, does not have the means of providing missile defense or air defense, communication centers, not to mention artillery, aviation, tanks.

In fact, it performs a symbolic function, denoting the Russian military presence. Thus, this group may become vulnerable in the event of an attack by Ukrainian formations. This option is not excluded, we have already written about it.

On the other hand, the advance of Russian troops towards Odessa creates a corridor that solves supply problems and removes the danger of both our peacekeepers and the whole of Transnistria being drawn into the conflict.

– A corridor in Pridnestrovie is certainly needed, – a military expert, captain 1st rank of the reserve Sergey Ishchenko is sure.

– And, of course, we are talking about the land corridor, the air corridor already exists. Actually, it is through it that our grouping in the region is supplied.

And earlier there was also a land one – it not only carried out supplies but also took out ammunition from warehouses in Kolbasna – those that could not be disposed of on the spot. However, since approximately 2000, Ukraine simply stopped letting our trains through. But this is also a serious problem, many ammunition has long expired, something needs to be done with them, otherwise, they are dangerous.

As for the supply of the grouping, this issue is still being solved at the very least. Moreover, those who serve in its composition are citizens of Transnistria who have become citizens of Russia and have signed a contract with our Ministry of Defense, i.e. they never leave.

“SP”: – Do you think the question of the corridor in Transnistria was kept in mind when planning the operation in Ukraine?

– I do not think. Nevertheless, when planning the NMD, they thought first of all about what to do with Ukraine, and Transnistria is already a derivative.

“SP”: – Will its full-fledged connection with Russia after the completion of the NWO somehow affect the status of the region?

– Hardly. If we are talking about some kind of international recognition, the West is clearly not going to recognize any change in its status.

“SP”: – And what if the Armed Forces of Ukraine and the national battalions attack Transnistria?

– I think that the Ukrainian units are unlikely to go in that direction. I am sure that they will retreat to Odessa in order to defend there to the end. As in Mariupol.

Zelensky’s adviser allowed a peace deal with Russia within a week.

“Until the last moment, the corridor was indeed only air, but now the situation has changed,” notes a military expert, political scientist, development director of the Fund for the Promotion of Technologies of the 21st Century Ivan Konovalov.

– After the capture of Nikolaev and the exit of Russian troops to Odessa, the Russian lands from Kherson to Transnistria will unite into what is called Novorossia.

“SP”: – Our grouping there, after all, is unlikely to be able to conduct serious battles.

– This grouping is actually difficult to call a grouping. She will not be able to resist a large-scale attack. But do not forget about the army of Transnistria, numbering 10-15 thousand people, it is well armed and trained – all these years it has been preparing for aggression from Moldova and Romania.

It is unlikely that the Ukrainian Nazis will dare to attack Transnistria. For them, it could end badly. Although, of course, they would not be averse to profiting from the ammunition that is in warehouses in Kolbasna. There is still just an incredible amount of ammunition there – it was all at one time designed for the entire southern flank of the Warsaw Pact.

“SP”: – But their expiration dates have long expired …
– The deadlines have passed, but the Ukrainian Natsiks are not embarrassed.

“SP”: – And what if the Ukrainian military will simply have nowhere to go? If our troops go to Odessa, they will only have to go towards Romania. Through Moldova and Transnistria.

– They can go if there is no way out. The fact that we are now hanging over Nikolaev, and at any moment an advance to Odessa may begin – already creates an atmosphere of anxiety for them. And yes, we are actually giving them the opportunity to get out. And they leave, including towards Chisinau, but in small groups.

Here it is necessary to recall that no one is waiting for them there, they will not have any support there, they are already being beaten and thrown out of the country because the Moldovans have run out of patience. They accepted them as refugees, and they began to establish their own rules there, to demand to pronounce “butter”, etc.

We know that the Armed Forces of Ukraine are indeed gradually leaving Odessa, but someone will still remain there and will try to repeat the Mariupol scenario, hiding behind civilians, threatening mass destruction. They don’t give a damn about people, about Odessa.

However, we are still waiting. They are slowly leaving, and I would like to hope that the Mariupol nightmare will not happen again.

“SP”: – What will change from a political point of view for Transnistria, when there will no longer be a hostile Ukraine between it and Russia?

– The actual status of Transnistria will change as soon as it is connected with other Russian regions. Most likely, a certain union of new republics in the south of Russia will appear, of which the PMR will become an equal member. The Kherson Republic is already appearing there, I am sure there will be a Kharkov Republic. Another question is whether he will join Russia, but I have no doubt that he will.

“SP”: – That is, it will be such a large union of unrecognized states?

– We’ll see. I think that a new Yalta is waiting for us, where the issue of recognition will be decided.