During a speech at Business Roundtable’s CEO Quarterly Meeting, Biden said, “There’s going to be a new world order out there, and we’ve got to lead it, and we’ve got to unite the rest of the free world in doing it.”

Biden is regurgitating what globalists in and out of the Council on Foreign Relations (CFR) have been saying for decades. New World Order operatives have paid off a sizable percentage of politicians in both parties inside The Beltway—including Biden.

New World Order globalists are concentrated mostly in the West, where they control the wealth—and hence the politicians—via the central banks. Politicians come and go, but the entrenched globalist elite remains.

And one cannot understand the New World Order without understanding the dominating role played by the Vatican and the Zionist elite—especially the latter.

This brings us to Ukraine.

Ian Greenhalgh courageously wrote a very insightful (and mostly ignored) treatise regarding the role being played in Ukraine by the international Zionist elite. But we ignore this insight to our own peril.

In order to gain some understanding of the current situation in Ukraine, the thing to do is to study the leading Ukrainian oligarchs, starting with Ihor Kolomoisky, also some of the Russian ones like Mikhail Fridman.

They are all Jewish, all have Israeli citizenship as well as Ukrainian/Russian citizenship. 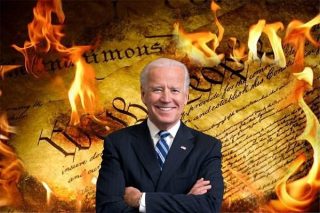 It’s quite simple, it’s all about money – Ukraine was by far the richest and most industrialized of the Soviet republics, it had some world-class industries like the massive Kharkov railway works, the Antonov aircraft plant outside Kiev, the iron ore and aluminum smelters of Donbas, the agriculture of the southern grain belt, to name just a few.

Now Ukraine is the 2nd largest country in Europe (after Russia) but the 2nd poorest (after Moldova) and all the industries are gone, assets stripped and bankrupted by the oligarchs, Ukraine has seen its GDP remain stagnant for 2 decades, unemployment is endemic – millions have moved abroad to work, little has been built or refurbished since the USSR fell, it is a country moving backward in most ways, robbed blind by a handful of Jewish oligarchs.

As for the Nazi thing, that Putin talks about but the West downplays or flat out rejects, well, the original Nazis were also the creation of Jewish high finance, but that’s another and rather a long story.

The Nazis in Germany, in modern-day Ukraine and the US, and everywhere else, were and are, the creation of the Jewish monied elite. Even Stroessner in Paraguay, Peron in Argentina and Pinochet in Chile, the third-rate Hitler wannabes, were their creations.

Every Ukrainian president and prime minister since 2004 when they had the first color revolution, apart from the pro-Moscow Yanukovich, has been hand-picked by the oligarchs.

Kolomoisky and a handful of other oligarchs are responsible for creating and funding the armed Nazi gangs that are supposedly volunteers defending Ukraine from the invading Russian hordes since the mythical invasion of 2014 but have actually been responsible for the murders of at least 14,000 Ukrainian civilians, of massacres such as the bestial attack on the pro-Yanukovich protesters in Odessa that saw pregnant women raped and murdered while others were burned to death. They have been constantly shelling the people of the Donbas for the last 8 years while the world’s media pretend they don’t exist or if they even acknowledge their existence, paint them as heroic crusaders holding back the tide of evil Russian imperialism.

They have names like the Azov and Dnipro battalions and they are manned by the worst criminals, thugs, sociopaths, psychopaths, rapists, and murderers money can buy, the scum of not just Europe, but the Americas, the Middle East, Africa & Asia – they come from all over the globe to supposedly fight a crusade against the evil Russians but in reality, they are nothing more than the muscle for the oligarchs and the instrument of violence and death they use to achieve their nefarious agenda.

So it is a moot point whether they are Nazi or not, the ideology is just a charade. In reality, they are the muscle for the crime bosses who have assets stripped of Ukraine and have designs on doing the same to Russia, if only it wasn’t for that pesky Putin standing in their way.

Now can you better understand why the Zionist puppet president in Ukraine, Volodymyr Zelensky, just a few days ago banned 11 political parties in Ukraine and consolidated all media channels into the government’s propaganda center?

And speaking of Putin: As he has now made the decision to declare war on the Zionist bankers (the real power) in Ukraine, many of the Russian elite (wealthy Zionists) are already planning to remove him from office. That’s NO coincidence!

By the way, this is the same Lindsey Graham that said that Joe Biden “is as good a man as God ever created.”

Then there is rabid War Hawk/Zionist/Globalist Liz Cheney of Wyoming who recently said that chemical weapons should be regarded as a “red line” to bring Washington into a direct military confrontation with Russia. What a joke!

The only chemical weapons in Ukraine are AMERICAN. The Pentagon placed over a dozen military Biolabs in Ukraine for potential use against Russia. Putin knows this, and no doubt those Biolabs played a major role in Putin’s decision to launch his military operations.

Cheney was doubtless selected as the NWO spokesperson to say what she said in order to plant the seed in the minds of the American people to the possibility of a Russian chemical attack, thereby paving the way for a false flag event that can be blamed on Russia.

Last Sunday, I brought a message entitled A Good Citizen Of Which Country? I urge readers to watch it.

I want to end this column by quoting some of the things I said in my message last Sunday:

Corrupt politicians and businessmen are upset about Ukraine because of the billions of illicit, laundered dollars that are invested in the banks of Ukraine, and evangelicals are using Ukraine to fight Russia because they believe Russia is the Gog and Magog of Ezekiel and Revelation—IT’S NOT.

The war fever being pitched by Lindsey Graham, Nancy Pelosi, et al. and America’s televangelists is due to the fact that they all are toadies for Zionism. Among many other things, Ukraine is a hotbed of Zionist thievery and thuggery.

Anytime you see Democrats and Republicans, the Hollywood elite, and Evangelical leaders joining together, you can know the common cause is supporting the Zionist agenda.

Plus, it is no coincidence that as soon as the phony Covid academic begins to fade out, there is a fresh war to take its place. How convenient! So, now the politicians can blame America’s crippling economy and hyperinflation—that they caused—on Russia.

I’m not picking sides in Ukraine at all. I’m saying that there is MUCH more to the conflict than what we are being told and that the entire war narrative that we are being sold is basically just another manufactured “crisis” such as Covid, the War on Terror, Iran, Iraq, Afghanistan, etc.

And I’m saying with George Washington that these foreign conflicts are none of our business.

First published on March 25, 2022, from ChuckBalwinLive.com

SOURCEChuckBaldwinLive.com
ATTENTION READERS
Due to the nature of independent content, VT cannot guarantee content validity.
We ask you to Read Our Content Policy so a clear comprehension of VT's independent non-censored media is understood and given its proper place in the world of news, opinion and media.