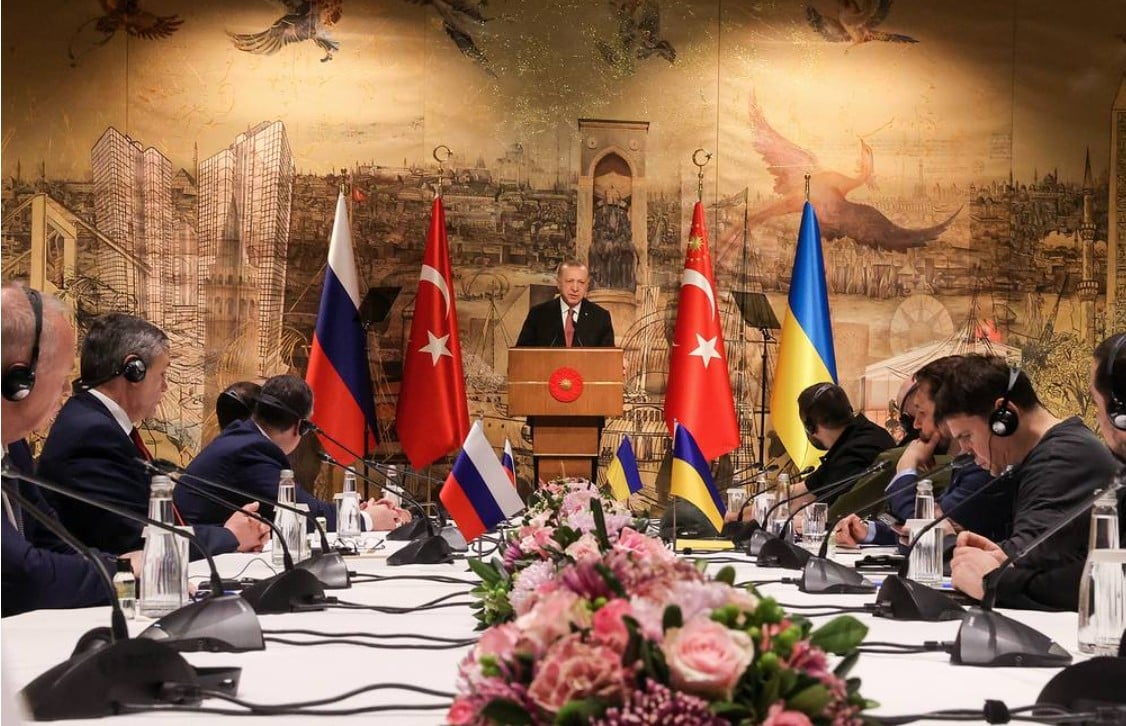 TASS – The Russian-Ukrainian talks that took place in Istanbul on Tuesday were constructive, the head of the Russian delegation, Presidential Aide Vladimir Medinsky, told reporters.

He said Moscow made two de-escalatory steps. One was offering to hold a meeting between presidents Vladimir Putin and Vladimir Zelensky simultaneously with the initialing of a peace treaty by their Foreign Ministries, or earlier than planned before. In the other step, Russian troops would drastically reduce their activities toward Kiev and Chernigov.

The talks were supposed to last two days – March 29 and 30 – but sources in the Russian delegation and the Turkish Foreign Ministry said the round was over and the meeting on Wednesday was off.

TASS has put together the highlights that have been reported about the outcome of the latest round of talks.

The Russian delegation in Istanbul has received from their Ukrainian counterparts a “clearly phrased position,” Medinsky said. Kiev’s proposals, he said, will be studied in the near future and reported to the president, and then Moscow will come back with a response.

In addition, the official said, Russia is making two de-escalation steps, in the political and military areas. The first step is that Russia is offering Kiev to move forward the possible meeting between the countries’ leaders. While initially Putin and Zelensky were supposed to meet after their Foreign Ministries initial a peace treaty, now these two events are proposed to be held simultaneously.

The second step was announced by Russian Deputy Defense Minister Alexander Fomin. “As the talks <…> are moving on to the practical terms, the Russian Defense Ministry <…> has decided to drastically <…> reduce military activity toward Kiev and Chernigov,” he said.

The Ukrainian written proposals include a ban on the production and deployment of weapons of mass destruction, as well as a ban on the deployment of foreign military bases in Ukraine, Medinsky told TASS. He later told reporters that Kiev’s position also implies a refusal to pursue a return of Crimea and Sevastopol to Ukraine by military force.

Alexander Chaly, a member of the Kiev delegation, said that Ukraine agreed to adopt a neutral and non-nuclear status if it were given security guarantees, which “in content and form should be similar to Article 5” of the North Atlantic Treaty. According to him, the guarantees should envisage military assistance and the establishment of a no-fly area after three days of consultations in order to pursue a diplomatic solution.

The guarantors, according to Kiev, could include permanent members of the UN Security Council (including Russia), as well as Germany, Israel, Italy, Canada, Poland and Turkey. Their guarantees wouldn’t cover Crimea and Donbass, according to the head of the parliamentary faction of Ukraine’s ruling Servant of the People party, David Arakhamiya, who is taking part in the talks.