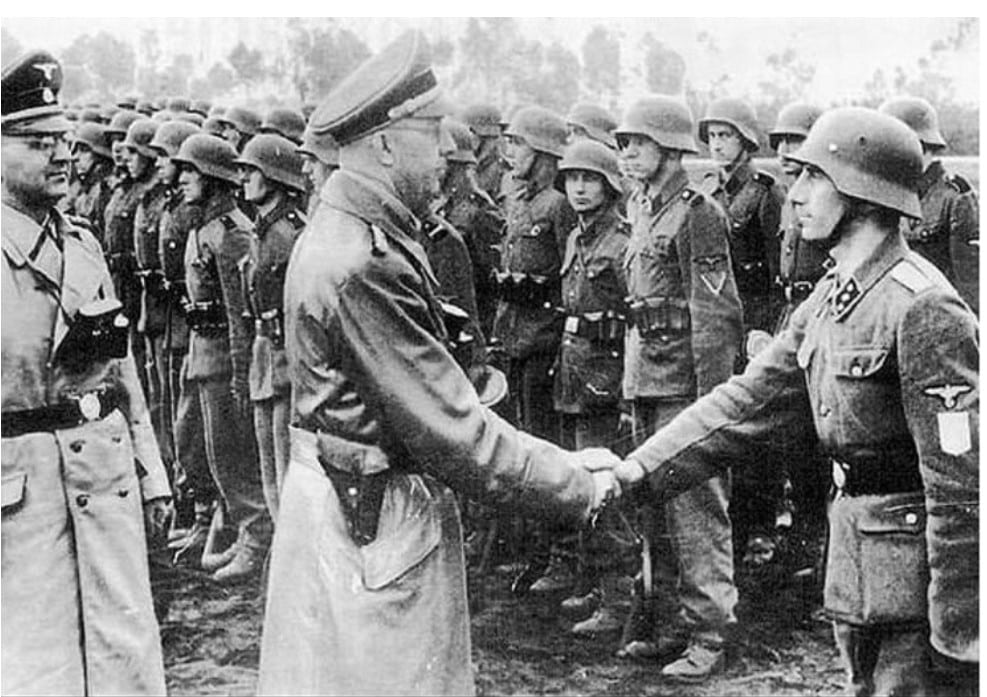 NEO:  The utter insanity of the Western Media at the outset of the Ukraine War, name-calling, using video game footage to prove atrocities, ploys that grew up during the War on Terror, have created a real shift that cannot be easily corrected.

Today, tens of millions of Americans and similar numbers from NATO countries including Turkey and Canada, know there is absolutely no limit in how utterly childish and unbelievable the kind of lies their governments spread have become.

Then the truth, a terrifying truth begins to take hold.

Without Trump’s relatively successful and certainly needed debunking of US media, this door may well not be open.

American scholars can no longer state where the lying began, how far it goes and to what extent long-accepted “facts” written into the history books may well be not just “biased” but utterly fabricated.

Thus, unknowingly, the corrupt NATO-controlled media of 2022 has begun to resemble science fiction. Even armies of fake “fact-checkers” aided by warmongering Google and social media allies haven’t been able to put yesterday’s fake reality back together.

Historians have long questioned what may have been behind World War One. Reanalysis begins to support hypotheses involving secret cabals, an analysis that not only carried through to today but traces back into the Middle Ages as well.

These cabals are mentioned behind closed doors with regularity but those referencing them in the media face smears and worse.

Today, as we see so often on Twitter and Telegram, even the dead and maimed are fake and those speaking up or exposing the truth are sued for defamation and convicted in rigged courts. Ask Professor James Fetzer or even media “hothead” Alex Jones.

Donald Trump spent his entire presidency exposing the mainstream media for peddling broad hoaxes. Then, to an extent, he became part of the problem, peddling stories about Syrian poison gas or failing to take responsibility for America’s other secret labs and blaming China only.

Yet, though Trump became the problem, his aftermath left the American people so distrustful of their media that when the same game was used in 1990 with Kuwait and Saddam, remember the fake story about the babies and incubators, tens of millions of Americans have sought to back Russia.

Although the MSM has lined with NATO and the Pentagon and anyone providing balanced coverage is smeared and belittled, more and more news agencies are telling the truth. What is that truth?

The US overthrew Ukraine in 2014 and put Nazi gangsters in charge. Then the nation was looted, up to 1 million Ukrainian girls have been trafficked around the world.
Then of course we have the secret labs that were built to test soil samples and crop diseases and are now, according to the Russian Ministry of Defense working on developing new breeds of mosquito that can spread anthrax.

Other projects are worse.

Worse still, President Biden is now telling us that Russia is planning to use chemical weapons in Ukraine. This story became shopworn when told in Syria where every time the Syrian Arab Army closed in on CIA-backed ISIS or al Qaeda (terrorist organizations, both banned in Russia), suddenly civilians were attacked with poison gas for no imaginable reason, or were they?

Proof provided to the ICC, including 38 former members of the White Helmets and doctors who treated fake victims at gunpoint demonstrated otherwise, findings long censored by NATO.
The real problem is deeper and, to an extent, has a philosophical aspect as well.

For those of us who have military and intelligence backgrounds and haven’t taken the “30 pieces of silver” from the military-industrial complex, recent events have shaken us to the core. No, it isn’t the risk of nuclear war or the very real suffering of the people of Donbas/Ukraine.

It is something far more sinister.

It is not an overstatement that private dialogs, now going on continually, between intelligence professionals, both retired and active serving at the highest levels, are addressing this issue.

The end of the Second World War and the outset of the Cold War led to a far more dangerous polarization than simply East/West or Communism v. supposed Free Market Economy.

A fake “left v. right” dialectic was created, to an extent to break up alignments based on traditional class struggle paradigms as outlined by Marx.

By the end of World War One, it had become clear that the rights of the common man, whether industrial workers, farm laborers, or small business, would lead to if allowed, free governments that would avoid new world wars and seek the broad advancement of humanity.

In the United States, the monied elements of the East Coast elites and their London/Frankfurt banking associates, began, in the 19th century, seizing broad swaths of land across the west while maintaining a stranglehold on all banking, trade, communication, and transportation.

They also maintained a stranglehold on the government, through control of the Senate, Supreme Court, and military, though gaping holes in constitutional protections. New states were poured into the Union like Nevada, Montana, Arizona, Idaho, Wyoming, and others with no population, just cattle, rail tracks, and concentration camps filled with Native Americans.

From this point onward, the Senate has been controlled by those same families, the ones that helped finance Germany’s rebirth under Hitler and, when his regime was crushed, picked up his offal and brought it to the United States.

After World War Two, Nazi and Japanese scientists were brought to the United States, the public knows. What the public isn’t told is that over 200,000 former Nazis were brought to America as well, not scientists but mostly Banderites from Ukraine and Waffen SS from the Netherlands, Norway, Latvia, Estonia, and Lithuania.

Their numbers help build a new foothold for the failed American NAZI regime that the Wall Street Coup of 1933, also called the “Business Coup” failed to put in place when attempts to arrest and imprison President Franklin Roosevelt was blocked by General Smedley Butler.

Coinciding with this, the Rockefeller and Ford Foundations began restructuring American reality. They rewrote history books, restructured America’s public universities and began reigning in the once partially free press, creating a level of control unimaginable, hiding behind a “red scare” witch hunt led by Roy Cohn and Senator Joseph McCarthy. Do note, just curiously, that this “Roy Cohn” was also to be a mentor for Donald Trump.

Did American presidents fight back? One did, John Kennedy, who stopped the invasion of Cuba and tried to dismember the Federal Reserve System, where America’s economy is managed by Frankfurt-based bankers whose names are “classified” by US law.

Americans of all political leanings are now not just coming together in fear, it goes beyond that to hopelessness. The Ukraine War is eight years old and has its roots in World War Two. Where joining with the Nazis against the Soviet Union may be one thing, joining the Nazis against Christian Russia is something else.

The motivation behind that is based on the exploitation of ethnic hatreds stoked by NATO since the overthrow of the Ukrainian government in 2014.

We saw it all play out with the shootdown of MH17. We saw evidence ignored, hoaxes become fact, and then it was all “certified” by a Dutch court that reeked of bias.

Now we see the US-run to the International Criminal Court to seek war crimes charges against Russia. However, in 2002, two decades ago, the US withdrew from the Rome Statute and left the ICC fearing criminal prosecution of its highest leaders based on crimes in Afghanistan, Iraq, and a worldwide kidnap and murder program called “rendition.”

All of this, of course, in response to 9/11, perhaps the event at the “dark heart” of the NATO lie machine, as well as “official” findings, are now generally accepted as the biggest coverup in history.

Then in 2020, the US placed the judges and prosecutors at the International Criminal Court at The Hague on the Terrorist Sanctions List of the US Department of Treasury for threatening to investigate US mass killings in Afghanistan. From Professor William Burke-White at the Brookings Institute:

At the start of the long war in Afghanistan, acts of torture and related war crimes were committed by the US military and the CIA at the Bagram Internment Facility and in so-called “black sites” in eastern Europe. Such actions, even though they were not a standard US practice and were stopped by an Executive Order from President Obama in 2009, nonetheless violate basic principles of international humanitarian law.

To date, only a few of the direct perpetrators of these abuses have been brought to justice through US military court-martials. Significantly, US investigations have not worked their way up the chain of command to hold accountable more senior officials who may have ordered or authorized torture and the targeting of civilians in Afghanistan. That will now change as the International Criminal Court opens an investigation into war crimes in Afghanistan committed by both the Taliban and the US military.

On March 5, the Appeals Chamber of the International Criminal Court (ICC) issued a striking decision, reversing an earlier ruling of the Court’s lower Pre-Trial Chamber and authorizing an investigation into war crimes related to the war in Afghanistan, including those that may have been committed by US citizens. An investigation will now commence that could well lead to the indictment of US service members, intelligence officials, and their commanding authorities for their conduct in Afghanistan more than a decade ago.

Such an investigation — while good for human rights and ending impunity — is something the US has long sought to avoid and was, in fact, avoidable. But US failure to fully investigate and prosecute these acts at home, along with the Trump administration’s vitriolic attacks on the court, now makes it more likely Americans will be prosecuted by the ICC.
If the US chooses to rejoin the court to use it as a hammer against Russia, this will likely be an end for that jaded institution long famous for prosecuting only people of color or chosen targets of NATO.

The fallout from the Ukraine War threatens a broad political realignment in the Middle East based on fear of Turkey’s emerging role.

Seemingly, the goal is a unipolar world based on gangsterism. No one can afford to allow this.