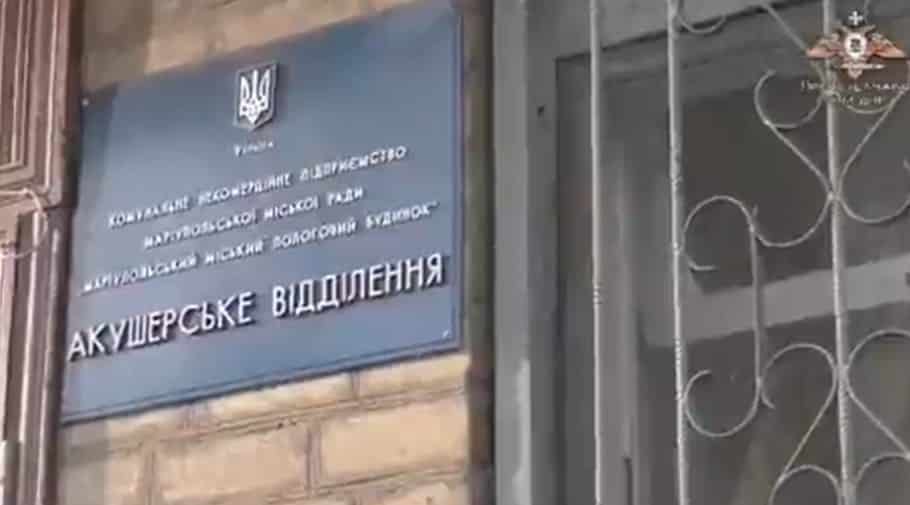 Currently, around a hundred people are being held, some babies and small children, mostly women, mostly patients, by Ukrainian Army holdouts.  Those at the hospital are prisoners, human shields, hostages and those holding them are threatening to kill them if not driven the required 200 miles to Nazi lines.

Their friends that already escaped did so by watching for women going by that were the “right-size” and dragging them off the streets, raping them, then taking their clothing and then beheading them and smashing them so they could never be recognized.

We have been seeing the evidence of this for the day.

Some have already been saved from Maternity Hospital No 2 but the NATO media says their rescue was “forcible.”

Oh god…and do read my latest NEO that discusses just this kind of crap or listen to my latest interview with John B. Wells on Caravan to Midnight.

Here’s Russian soldiers protecting Ukrainian pow from civilians In Mariupol that want to rip him apart. 😉 #NaziUkraine soldiers have been killing and torturing civilians, keeping them locked inside the cities to use them as human shield pic.twitter.com/lfXe9xeFMv

After face green painted men are simply beheaded and then the clothes stolen so they can flee the Russian army. This happened in Mariupol. That was happening in Donbass. And it's happening in all over Ukraine yet. Population is scared and is being used as human shield, MoFo! pic.twitter.com/fW3A69zq9Q

About a hundred people are in one of the besieged maternity hospitals in Mariupol. This was reported by the headquarters of the territorial defense of the DPR.

What interview? I can show you an interview of real women in labor in the maternity hospital N2 of Mariupol, which the Ukrainian military has been shooting at for a couple of days and there are real women with children there, not staged photos pic.twitter.com/CRN2r2OW1f

“Ukrainian militants besieged the Mariupol maternity hospital, preventing women from getting water to the nearest well in the private sector of the city,” the ministry’s Telegram channel said in a statement.

A Mariupol civilian relates how Ukrainian Nationalist army were terrorising the entire city & how they were engaged in pillaging, shooting people and shelling residential buildings with tanks.She also recalls that Ukrainian militants stationed tanks in the courtyard in mid-March pic.twitter.com/tNaxFF2ivr

According to the Donetsk security forces, we are talking about maternity hospital No. 2. There are about a hundred people there, 37 of them are children and five babies, RIA Novosti writes .

❗️The head of the department at the maternity hospital №1 in Mariupol about the Azov Nazis. According to Anna, Azov militants constantly created conflicts with civilians and felt like the owners of the city. pic.twitter.com/NLjKzkUlUd

Earlier, the People’s Militia of the DPR reported that the maternity hospital had already been shelled by Ukrainian troops several times. The defense department noted that health workers are forced to give birth by candlelight and hid newborns in basements.

A resident of Mariupol talks about (https://t.co/a1qXsLe1un) how –
The Azov and Ukrainian armies use civilian buildings and schools as a "human shield". #USA #War #Ukraine #PutinsWar #Biden #Russian #Zelensky #GreatBritish pic.twitter.com/ksoixnZrZu

Earlier it was reported that the chairman of the Russian Investigative Committee Alexander Bastrykin instructed to investigate the torture and brutal murder of a resident of Mariupol by Ukrainian militants.