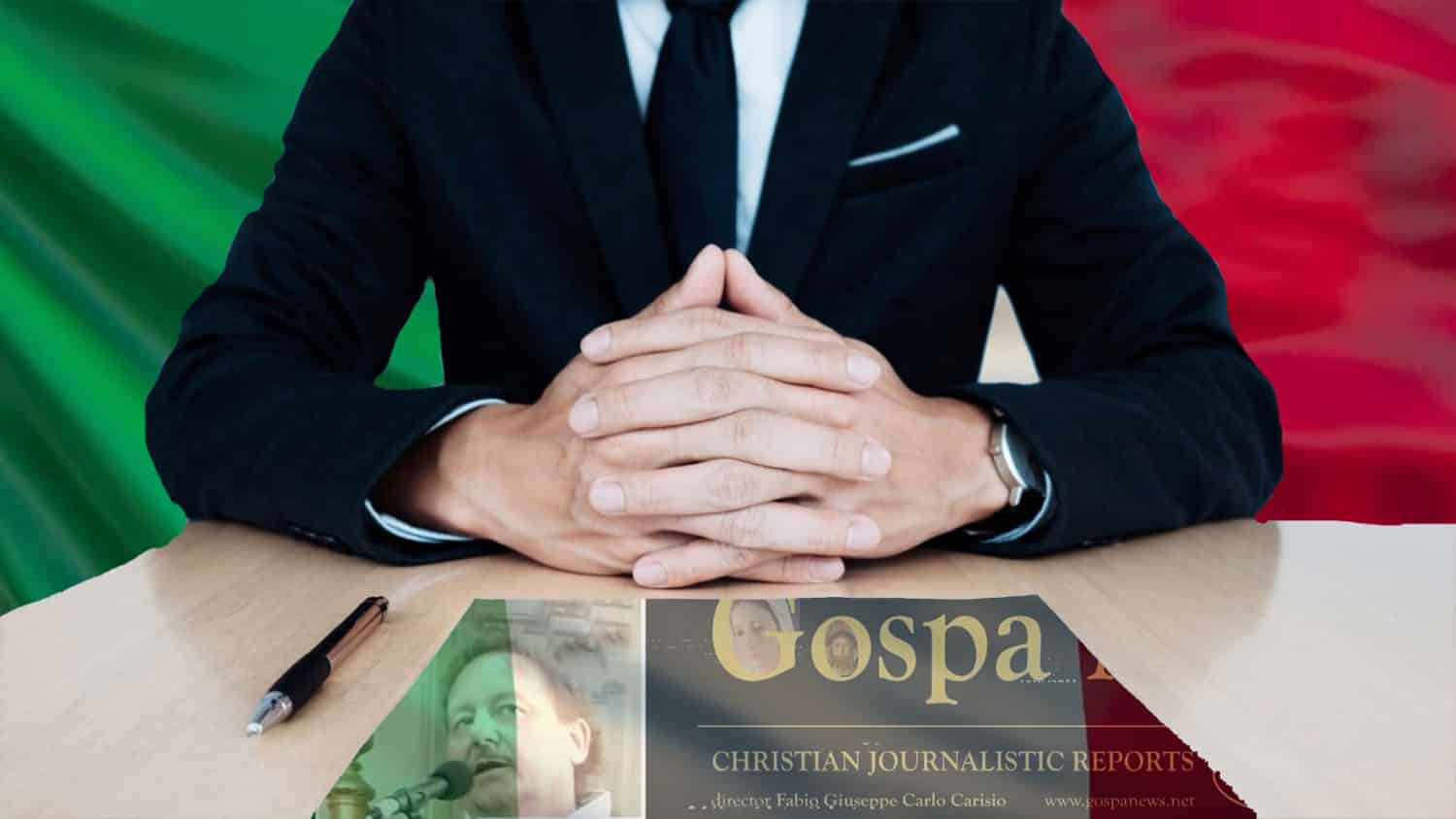 Jeff J. Brown Question #1- Please tell us a little bit about yourself and your life.

Fabio Carisio Answer #1- I love to write poetry and therefore I chose journalism to express my love for writing. I consider myself a Christian aspirant because despite a sound Catholic education I am still far from that vocation to Holiness towards which I should strive. But I made honesty, transparency, and justice – values taught to me by my parents – my weapons to fight against all forms of evil, especially in my profession. This seriously compromised his career in a tragic mafia country like Italy

Q #2- Your website and writing indicate that you are against the Western empire, for the lack of a better term. Please tell us about your arc of awareness. Was it a slow realization or an epiphany? Did it happen earlier in your life, or later?

A #2- Absolutely late. I have always had great respect for the institutions that began to creak after the mysterious massacre of the DC-9 Italia which fell on June 27, 1980, near Ustica with 81 deaths. I was a child when it happened but when I took care of the interminable investigations 15 years later including the serious misdirections carried out by the government and the Italian armed forces according to those occult plots already adopted during the Gladio-Stay Behind operation and before that with the agreement between the Lucky Luciano’s mafia and the OSS (Ex Central Intelligence Agency) for the landing of the Allies in Sicily.

From there, the Anglo-Saxon Freemasonry took control of Italy in an intertwining of military secret services and the mafia culminating in the killing of judges Giovanni Falcone and Paolo Borsellino who were investigating the relations between the mafia, politics and freemasonry. When in 2004 a friendly magistrate asked me if I would not have liked to collaborate with the CIA, I made one of the fatal refusals, because for professional ethics it is forbidden for both magistrates and journalists to collaborate with the secret services. The other refusal was to enter Freemasonry. From there my journalistic career slowed down mysteriously … But due to a strange fate today I write with VT where former CIA officers also write: but I do it today as a free man!

Q #3- You report a lot about bioweapons. What got you interested in this subject?

A #3- After multiple current events and history inquiries on the wars in the Middle East, I understood the crucial and strategic importance of the Weapons Lobby in the global geopolitical chessboard. So in 2019, I made a dossier on the main war corporations and all their shareholders.

When the Covid-19 pandemic broke out in January 2020, thanks to you Jeff and the Bioweapon Truth Commission site, I immediately followed the trail of the SARS-Cov-2 built in the laboratory as a bacteriological weapon, immediately highlighting the suspicions on the USA for the numerous biological laboratories opened in the countries of the former Soviet Union and brought to light by the explosive investigation of the Bulgarian colleague Dilyana Gaytandzhieva.

For this reason, I understood that if I wanted to understand more than others I had to know and study more than others on the OSINT sources (Open-source intelligence) available. I thank Divine Providence for letting me find some annual US and UK Biological Weapons Convention (BWC) reports that allowed me to understand how well-founded the suspicions about the artificial origin of SARS-Cov-2 were. Today it is now a certainty!

It is now a certainty thanks to 50 investigations of the WuhanGates cycle, where the “s” added to a much worse scandal than WaterGate is absolutely no coincidence but evokes the name of the great director, in which I have published and crossed dozens and dozens of researches bacteriological on SARS viruses, scientists who died mysteriously and very dangerous experiments for the creation of pathogens recombinant with HIV. I found at least 12 in which SARS was mixed with the AIDS virus. As happened for SARS-Cov-2 according to the late French virologist Luc Montagnier, winner of the Nobel Prize for Medicine, and the bio-engineer Luc Bricage, a former NATO consultant whose research only Gospa News has published.

Q #4- Like me, do you find most Westerners are in denial about what their governments have done with bioweapons and continue to do so, as we have seen with covid, and now all the revelations about Ukraine?

A #4- I thank these whores of mainstream journalism because, if they worked seriously instead of selling themselves to the client on duty, journalists from small sites like mine would not have been able to have international visibility.

The way they denied the evidence of laboratory SARS-2 and dangerous RNA gene sera is the same way that many of them denied the evidence on the missile that destroyed Ustica’s plane, manipulated the disaster of the downed Malaysia Airlines flight in 2014 in Ukraine, the origins of the bloody coup in Kiev and the chemical attack in Douma, Syria, organized by the Al Nusra jihadists with the White Helmets paid by the US and UK but attributed to the Assad reign with a shameful false-flag. This justified the rain of 100 Tomahawk missiles ordered by the inexperienced one of Trump, then torpedoed by the New World Order which led him to make very serious geopolitical errors such as the assassination of General Qasem Solemaini who stole all the votes of American Muslims in subsequent presidential elections.

If the criminal governments perched around the political axis of the CIA Washington-Rome-Brussels can lie about the massacres, it is only thanks to our fellow journalists who have become accomplices of the executioners of humanity.

Q #5- The US and its vassals are immune from international laws and norms. What will it take to get America’s 326 WMD bioweapon laboratories decommissioned and assure they stop all these genocidal programs, which are war crimes?

A #5- We need some atomic bombs and then the beginning of the Apocalypse. Unfortunately, the plot of the New World Order has now crept so deep into the soul of men, mostly non-thinking idiots blinded by material well-being, that I think it is extremely difficult if not impossible for public opinion to be able to initiate a global protest as it did for atomic weapons.

There is not the slightest awareness of the potential for death of these bacteriological death programs that the Pentagon has been experiencing since 1952, as evidenced by a video of the Navy declassified and published exclusively by Gopsa News. The pandemic has made the world population an army of puppets who drink like Coca-Cola the lies of those same governments for years accused of being dirty and corrupt. After Covid, it seems that politicians have all become wise, intelligent, and honest in the eyes of the Covidiots!

A #6- It is a Croatian word that means Lady but above all Madonna. I learned it in my 10 pilgrimages to Medjugorje, where the Queen of Peace has appeared to the visionaries since 1981, as recognized in part by the Catholic Church. Given the weight of my inquiries, I thought of entrusting myself to the Blessed Virgin Mary to be protected from strange accidents, drones or poisonings … And from judicial cases! In fact, to strike me one must sue the Gospa!

Q #7- Other than your excellent website, can you recommend any books to read and films to watch, that are informative about bioweapons?

A #7- Unfortunately my book “WuhanGates – SARS-Cov-2: The NOW Plot” was only published in Italian. In it, the word “bioweapon” appears hundreds of times. I recommend watching the video on the simulated Navy exercise in California in 1952. I can’t recommend many books because I haven’t read one since the pandemic started: I only read journalistic inquiries and scientific research.

Q #8- What journalism and book projects do you have in the pipeline? Are there any other subjects you would like to expose?

A #8- I was about to start writing WuhanGates – 2. The sequel to my first book but the outbreak of the war in Ukraine made it partly outdated. Therefore, I believe I will have to make a more complex one, centered on the plots of the New World Order from the Pandemic to the Apocalypse. Maybe with a nice photo of the suspected Antichrist …

At the moment the candidate for that image is called Joe Biden. Although he is perhaps just the most dangerous puppet on earth with a license to kill. As he did with impunity with SARS-Cov-2 created in a China-US affair (with the Shanghai Gang of former Chinese president Jiang Zemin, the Tiananmen executioner) during his administration with Obama and how he perpetrated the coup in Kiev which resulted in the massacre of Ukrainian neo-Nazis in the Donbass and the end of the patience of the Russian president Vladimir Putin. The secrets of the war in Ukraine are within everyone’s reach: just learn to read… What the mainstream does not write!

Jeff: Fabio, thanks for being on the China Rising Radio Sinoland Show. ARRIVEDERCI!

Other Articles from Gospanews.net