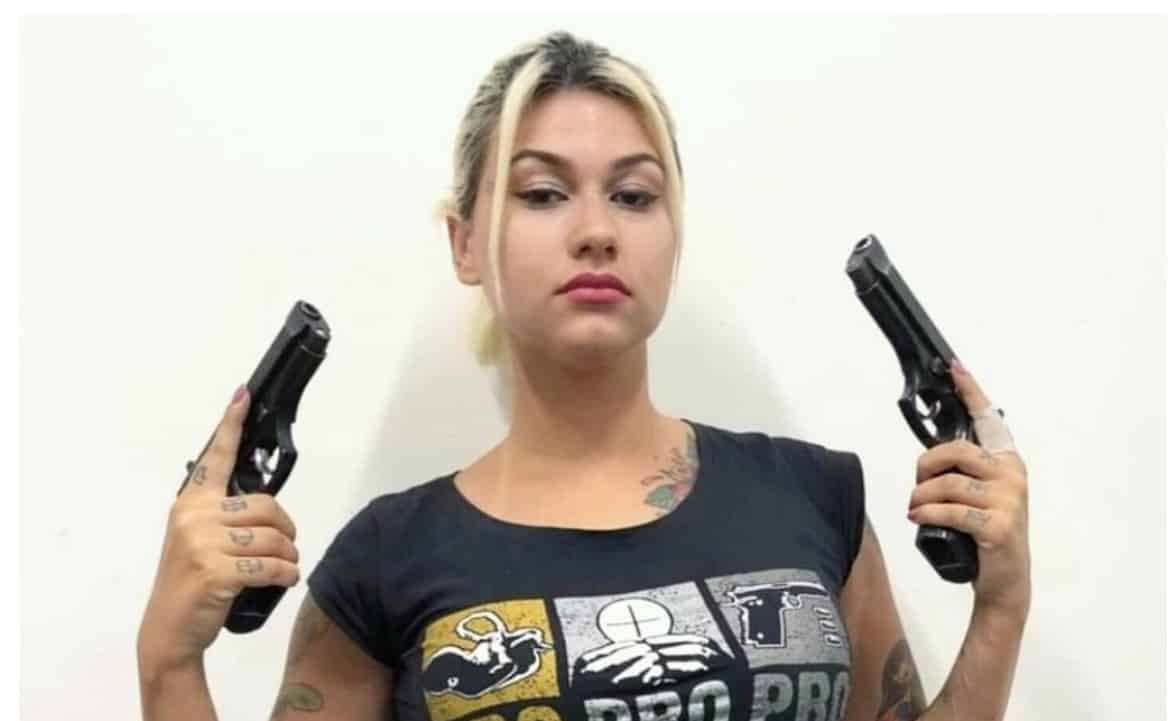 MintPressNews.com – SÃO PAULO – During the last two weeks, a small group of Brazilian bolsonaristas became social media celebrities as they crossed the border into Ukraine to fight against Russia – posing with assault rifles on Instagram, reciting prayers to the special forces, and sharing video monologues praising the brotherhood of people from around the world who had gathered in a training base near the Ukrainian city of Lviv to kill Russian “communists.” The group’s inexperience was demonstrated by the fact that most of their social media posts included their geo-location information.

This all changed following a missile attack on the training base near Lviv on March 13, after which a series of more humble photos and videos began cropping up on their Twitter and Instagram feeds.

From across the Polish border, Jefferson Kleidian posted a selfie brandishing an injured pinky finger and thanking God for one more day on Earth.

Andre Hack posted that he had lost friends at the base. Twenty-eight-year-old shooting-range instructor and Bolsonaro fanatic Tiago Rossi tweeted a video saying he had fled the base immediately before the missile strike. “Our entire legion was destroyed, the information I have is that everyone died. You don’t understand what it’s like to have a fighter jet fire a missile at you. I didn’t think it was a real war,” he said.

"You guys don't understand what it's like to have a jet shoot a missile at you."
So war isn't a movie or a video game.
Brazilian describes what happened when Russians missiles hit the base where the foreign legion was deployed.
Thanks to @BrianMteleSUR for translation. https://t.co/1HFcXi6zby pic.twitter.com/DZRPDQmiDP

What were these Brazilians doing in Ukraine in the first place? In order to answer that question, one has to look back at the resurgence of Nazi ideology in Brazil and the deepening relationship between Brazil’s neo-Nazi groups, which have grown by a staggering 270% since Jair Bolsonaro took office in 2019, and Ukrainian neo-Nazi organizations like Azov.

During the 1930s, Brazil was home to the largest German Nazi party outside of Europe and had a much larger indigenous fascist movement, called the integralistas, that tried to enact a coup in 1938. The coup was crushed but the ideology lived on in a country that already suffered from severe structural racism as the last place in the Americas to eradicate slavery.

Brazil’s current president, Jair Bolsonaro – who made it into power only after a joint U.S. DOJ/Brazilian Public Prosecutors operation jailed the leading 2018 presidential candidate on false charges — began his career as an army captain during a sub-fascist military dictatorship, which employed Gestapo tactics like death squads and torture against labor union leaders, intellectuals and communists.

As a congressman in 2004, Bolsonaro wrote a series of letters to neo-Nazi websites, saying things like “you guys are the reason I am in politics.” Grounded on a platform of anti-communist hate speech, his presidency unleashed a flood of public support for fascism, which had been latent since the end of the dictatorship. According to Brazilian law, Nazi organizations are illegal, but according to anthropology professor and Nazi researcher Adriana Dias, there are currently 530 neo-Nazi cells operating in Brazil. Since 2012, these organizations have had increasing interactions with Ukrainian Nazi organizations, which have resulted in Brazilian Nazis gaining combat experience with Azov in Donbas and a campaign to “Ukraine Brazil” run by a right-wing extremist faction of Bolsonaro supporters.

The role of a FEMENazi

Sara Fernanda Giromini was a teenager involved in Nazi skinhead gangs in Sao Paulo when she opened a VK account and made friends with Russian and Ukrainian neo-Nazis and learned about  FEMEN after reading about it on Facebook. VK is a popular Russia-run social media platform.

Giromini first visited Ukraine in 2011, where she met and trained with FEMEN leaders and other actors from the Ukrainian far-right. After returning to Brazil in 2012, she started calling herself Sarah Winter in homage to the English fascist of the 1920s.

After a series of topless protests transformed Giromini into a celebrity, FEMEN Brazil imploded in less than a year. Bruna Themis, number two in the organization, resigned and gave a series of whistleblowing interviews, saying that the Ukrainians demanded they kick out any Brazilian woman who didn’t meet their sexist physical appearance and weight standards; that the real leader of the group was a minor far-right politician named Andrey Cuia, who frequently traveled back and forth to Ukraine; and that Cuia and Giromini were ripping off donors and keeping the money for themselves.

Shortly afterward, FEMEN Ukraine announced that FEMEN Brazil had nothing to do with them, despite the fact that Giromini was arrested during a FEMEN protest in Kiev in 2012. Giromini now says that during her time in FEMEN, they paid her $2,000 per protest.

According to Professor Dias, after FEMEN folded, Giromini, who remains friends with several leaders of Azov and the Phoenix Battalion on her VK account to this day, began inviting Ukrainian neo-Nazis to Brazil.

In 2016, civil police in the southern state of Rio Grande do Sul, home to several waves of German and Italian immigration and a long fascist tradition of its own, carried out an investigation against neo-Nazi groups that were planning violent attacks against Afro-Brazilians, Jews, and LGBT+ and discovered that the Ukrainian neo-Nazi militia Misanthropic Division was recruiting Brazilian Nazis in seven cities in the state to serve as volunteer combatants with Azov in the Donbas region. The investigation, which was dubbed “Operation Azov,” received ample coverage in the Brazilian and  Israeli press at the time.

After leading candidate Luiz Inácio Lula da Silva was arbitrarily imprisoned during the 2018 election campaign, Bolsonaro was swept into office on a wave of Nazi-influenced anti-communist propaganda that led him to label any person or organization that ever criticized him as a communist. At one point he even called the oldest conservative magazine in the world, The Economist, “The Communist.”

Giromini, by this time a vocal member of the anti-abortion movement, campaigned heavily for Bolsonaro. After he took office in 2019, she began a public call to “Ukrainize Brazil.” Many of the most reactionary public figures associated with Bolsonaro, like openly fascist Rio de Janeiro lawmaker Daniel Silveira, joined the campaign. Professor Dias says, “Azov’s tactic has always been to bring a group of 300 people to a city and, through training activities with locals, start a right-wing extremist movement.” Giromini relocated to Brasilia and started an organization called the “group of 300” to help build support for the Ukrainization of Brazil.

In 2020, after the Brazilian Supreme Court blocked one of Bolsonaro’s attempts to bypass the Constitution, Giromini’s group of 300 camped out on the national esplanade, held a series of tiki torch-wielding protests in front of the court building and shot fireworks at it. Posing for selfies with guns, she was cited for violence against Supreme Court Ministers; on July 15, 2020, the Supreme Court ordered her arrest. After two weeks in jail, she was given an ankle bracelet, transferred to house arrest, and ordered to stay off social media. She has been there ever since.

Meanwhile, Ukrainian flags and symbols of the Ukrainian far-right became more and more popular at pro-Bolsonaro rallies. In 2020, a former soldier and security consultant named Alex Silva, who has been living in Kiev since 2014 and says he is a member of an “auxiliary volunteer police force” there, triggered a media controversy that led to an official disclaimer from the Ukrainian Embassy when he hoisted a red and black Pravyi Sektor flag onto a sound truck at a Bolsonaro rally and was photographed walking through the crowd wearing it like a cape. Silva, now back in Kyiv, has become another internet celebrity to the Brazilian far-right, posting videos of his armed voluntary patrols of Kyiv as recently as this week.

Leonel Radde is a Porto Alegre city councilor who spends a lot of his time investigating neo-Nazi groups in the Rio Grande do Sul. Asked about connections between Brazilian and Ukrainian neo-Nazi groups, he said:

We see clearly that the majority of Nazi groups here use Ukrainian design elements. They are using the same symbols – mainly the black sun — and they all use this discourse of Ukrainizing Brazil. They also talk among themselves about adapting Ukrainian tactics for setting up camps and occupying public squares and things like that. They are definitely trying to copy what happened in Ukraine in 2014. We are trying to figure out how much they are just copying things they see on the internet or if they are being financed from the Ukraine, although Sarah Winter spent time near Porto Alegre doing organizing work and she started this whole thing.”

Meanwhile, far-right social media influencers like Alex Silva are still sending reports from Ukraine. Last week the Ukrainian Embassy in Brasilia said it received 100 requests from Brazilians asking volunteer for the Ukrainian army, and UOL reports that analysis of bolsonarista social media groups shows that 500 others are planning to go.

Whether the missile attack near Lviv and reports coming in from scared-looking former Brazilian combatants who have escaped to Poland will change any of that has yet to be seen. Regardless, it is clear that political indoctrination from Ukrainian Nazis has taken hold among Brazil’s growing far-right and will be a factor in this year’s presidential election season.

Brian Mier (@BrianMteleSUR) is Brazil correspondent for TeleSur English TV news program From the South, co-editor of Brasil Wire and co-host of the Portuguese language WebTV program Globalistas on Brasil 247. He has lived in Brazil for 26 years.