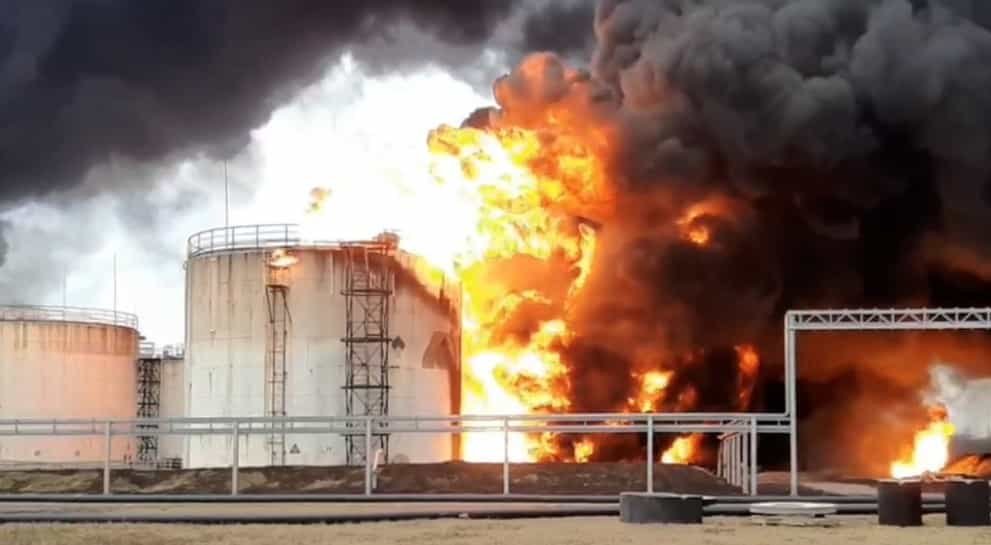 RT.com: Kremlin spokesman Dmitry Peskov has said that the reported Ukrainian helicopter raid on an oil terminal does not help future peace talks with Kiev. The facility, which is located in the Belgorod region, caught fire on Friday amid Russia’s ongoing military campaign in Ukraine.

“Of course, this cannot be perceived as creating comfortable conditions for continuing the talks,” Peskov claimed, adding that everything was being done to prevent disruptions in fuel supplies in the region.

Peskov added that President Vladimir Putin was briefed on the matter

The Russian Defense Ministry has not publicly commented on the incident. The Ukrainian General Staff similarly did not comment on the allegations in its regular reports on Friday.

#BREAKING: Ukrainian helicopters have launched a cross-border raid on a Russian oil facility in Belgorodpic.twitter.com/Fz1OTz7Dh8

The news website Segodnya.ua, however, quoted a Ukrainian military source as saying that the explosion at the terminal occurred “due to negligence, or to conceal someone’s corruption.”

Moscow attacked the neighboring state in late February, following Ukraine’s failure to implement the terms of the Minsk agreements signed in 2014, and Russia’s eventual recognition of the Donbass republics in Donetsk and Lugansk. The German and French brokered protocols had been designed to regularize the status of those regions within the Ukrainian state.

Russia has now demanded that Ukraine officially declare itself a neutral country that will never join the US-led NATO military bloc. Kiev says the Russian offensive was completely unprovoked and has denied claims it was planning to retake the two republics by force.