Encircled by Nazis and left abandoned after a team of British secret agents failed to secure their escape, eighteen U.S. airmen were left with little choice: flee or be killed. This book is a riveting narrative of survival and brotherhood told by the historian son of one of those gritty survivors, Charles E. Stanley, Jr.

Late in 1944, thirteen U.S. B-24 bomber crews bailed from their cabins over the Yugoslavian wilderness. Bloodied and disoriented after a harrowing strike against the Third Reich, the pilots took refuge in the Partisan underground. But the Americans were far from safety. 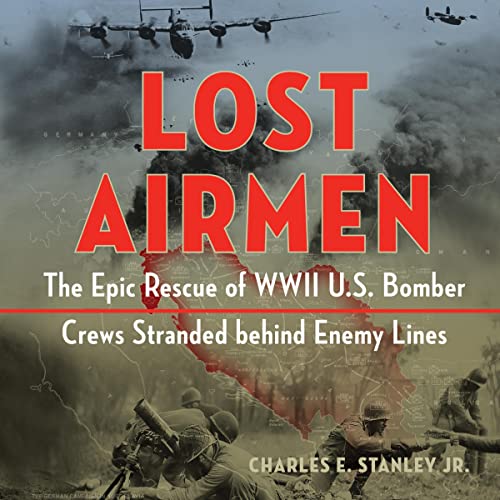 In The Lost Airmen, A Drawing on over twenty years of research, dozens of interviews and previously unpublished letters, diaries, and memoirs written by the airmen, Stanley recounts the deadly journey across the blizzard-swept Dinaric Alps during the worst winter of the Twentieth Century-and the heroic men who fought impossible odds to keep their brothers in arms alive.

As an internationally recognized expert in the field of U.S. airmen downed in WWII, Stanley gives a stunningly detailed account of the plight of his father and the team of airmen from both a military and familial perspective.

Lost Airmen will change the way you understand WWII history and inspire a new pride in the American men who defeated the Third Reich.

About the Author: Charles E. Stanley, Jr. is the son of one of the eighteen Lost Airmen who walked across the Yugoslavian wilderness to safety in January of 1945. Stanley holds a bachelor’s degree in history and political science from the State University of New York at Buffalo and a master’s degree in international studies from the University of South Carolina. He also completed further postgraduate work in political science at the State University of New York at Albany. Now retired, he held several important positions in the New York state government. Most notably, he helped coordinate the state’s response to the 9-11 World Trade Center disaster as an aide to Governor George Pataki. He also taught graduate-level courses at Marist College.