Home WarZone Ukraine War “Gas to Europe with Payment in Rubles only”. Putin’s Checkmate to the... 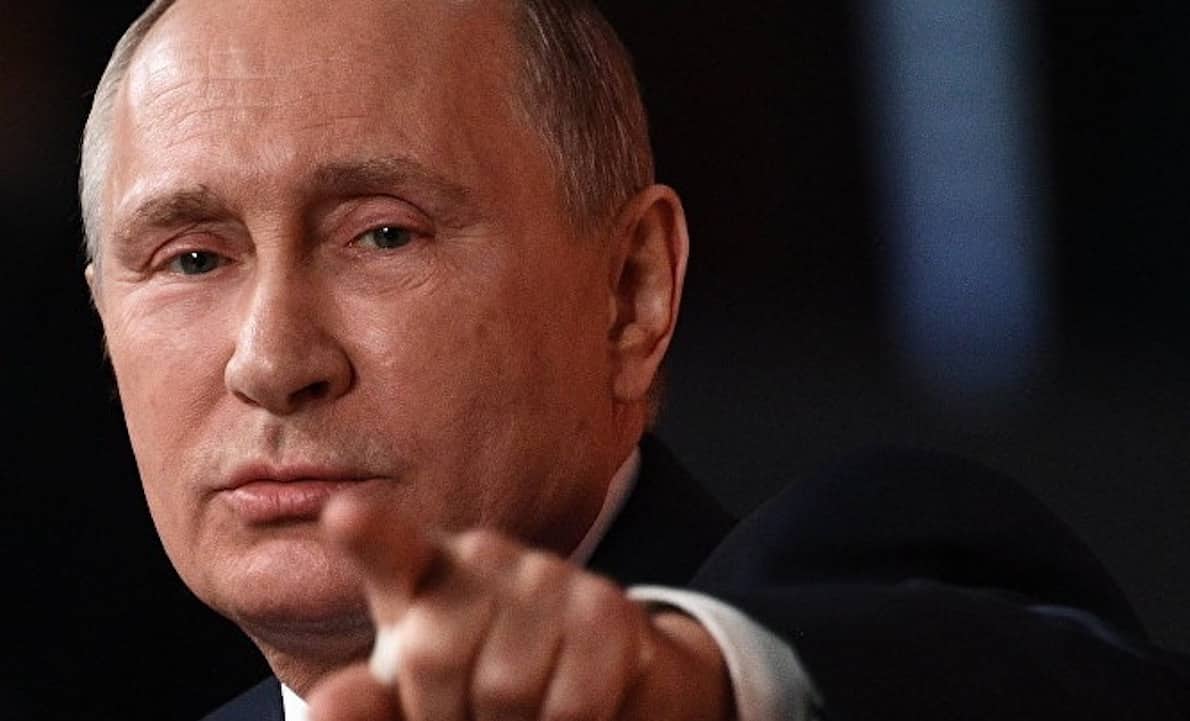 After years of censorship and blackout of my exclusive inquiries by the Italian mainstream media, today I can also show off a bit of intellectual narcissism and boast of having been interviewed by my American colleague Jeff Brown, a famous geopolitics journalist among the world’s leading experts in China and bacteriological weapons. Therefore, the investigations that I have published on Gospa News since July 2018 are slowly leaving a small mark at an international level, similar to that left in Italy in the 1990s by other inquiries which also led to excellent arrests.

With this awareness, I can therefore more worthily comment on the Checkmate that the new Tsar of Christianity Vladimir Putin made against the West of the New World Order and against that pro-Nazi and pro-jihadist terrorist fanatic of the Ukrainian President Volodymyr Zelensky, than Carrying out his mission to destroy Ukraine as a NATO hitman will probably have no qualms about killing relatives either.

The news released a few hours ago by the agencies is perhaps the most important since 22 February 2022, when the Russian president formalized the recognition of the pro-Russian separatist republics of Donbass, battered by a genocide of 14 thousand dead including 500 children perpetrated by the army of Kiev with the ferocious Nazi guerrillas of the Azov Battalion in 8 years of silence: both of the President of the Italian Republic Sergio Mattarella and of Pope Francis.

Both seem capable of screaming in inhuman shame in the face of the war conflicts, to which NATO is addicted, only when from Langley (headquarters in Virginia of the US Central Intelligence Agency counter-intelligence) they launch the imput to turn on the flashing red lights on the occult Masonic line of NWO rulers among Washington, London, Brussels and Rome.

This channel has in fact been run in for several decades with the Expedition of the Thousand, the American Secession War, the Assassination of Abraham Lincoln, the breach of Porta Pia, the Great War, the Allied Landing in Sicily, the birth of the Zionist Movement for the State of Israel, Italian politician Moro Crime, Invention of Al Qaeda and Isis, War in the Balkans, 9/11 Massacre, Arab Spring civilian wars, George Soros’ Color Revolutions and, most recently, 2014 Kiev coup and the killing pandemic with manmade SARS-Cov-2.

What did Putin say to Western governments who faked the scandalous pantomime of making him look like a ferocious invader in the eyes of covidiots dazed by experimental gene serums that actually may cause “brain-fog” disorders?

Either you pay me for the gas in rubles or I cut off the supplies.

«”Vladimir Putin signed the presidential decree, effective from tomorrow April 1, which requires payment in rubles in the Russian natural gas trade with so-called hostile countries:” Refusal to pay gas in rubles will be considered a failure to fulfill obligations and that, in this case, existing contracts will be terminated. Nobody sells us anything for free and neither do we do charity “, he added, repeating a formula already used in recent days. If, on the other hand, Europeans want to resort to US gas “they will pay more”, because Washington tries to “profit from global instability”» writes Italian national TV RAI News.

«He then defined the sanctions inflicted by many states in Moscow as” illegitimate “, arguing that they have been” introduced for many years now to weaken the productive and financial potential of our country, they are sanctions prepared previously and which would have been introduced in any case, ” they are sanctions against our right to freedom and independence, against the right to be Russia. The economic war against Russia has begun”» adds the Italian national TV which then gives space to the piqued responses of the European rulers as if they had the slightest say in the matter.

Russian authorities have yet to reveal the mechanism to convert gas payments into rubles from March 31. In parallel, Gazprom, according to the Russian newspaper, Kommersant, is also working on a scenario to stop gas supplies to “hostile countries” and the consequences of such a step.

The move of the Czar of the Kremlin completely displaces the global geopolitical scenario where he has made the reputation, in the NATO offices as in those of military intelligence, of a dangerous but too good bear precisely because he is authentic CHRISTIAN: unlike other dragons of economic strategies financial such as the criminal Joseph Biden, financier of the experiments on chimeric SARS then mutated into SARS-Cov-2 by his loyal Anthony Fauci with the international coverage of Bill Gates.

As even NewsWeek noted, Putin didn’t really want to hurt the Ukrainian population. It has really limited to a minimum the civilian deaths that could have been the most functional viaticum for an immediate surrender of the Zelensky puppetand the puppet Jens Stoltenberg, arrogant secretary of the Atlantic Alliance only because it is about to expire and already projected to the presidency of the Bank of Norway which speculates on the Weapons Lobby as well as on Big Pharma for vaccines.

Five hypersonic missiles on Kiev at dawn on February 24 would have been enough and all the Ukrainians took to the streets in their underwear to surrender as the Japanese did after the atomic bombs in Hiroshima and Nagasaki. All this in the military headquarters of NATO and the Pentagon (US Department of Defense) they knew very well. But they had already seen the caution with which the Russian army did not raze the Qaedist stronghold of Al Nusra in the Syrian province of Idlib. Now, however, they find themselves really displaced …

Because before triggering a gradual Third World War, the Atlanticists of the NWO need their fake pacifist to conclude his performance as an actor in the most merciless soap opera in human history after the one already screened in Syria, where people are still crying out of hunger, despite the appeals of the Christian bishops for the removal of the sanctions on which the Holy Father is silent !

They need Zelensky to persuade TV-dazed Westerners, ready to insult politicians for two wads but just as willing to blindly believe themselves when it comes to using their children as guinea pigs, that the Russian president is the embodiment of a satanic tyrant to prepare world consensus for the final attack on Russia.

Rome’s corrupt parliamentarians like Italians and Europeans are falling for it, forget that half of the planet’s media have been funded by Bill Gates, a great director of the pandemic as well as the war in Ukraine, having been the one who created the international credibility of NATO secretary Stoltenberg.

The Ukrainian president, placed in Kiev a few years after a bloody coup hatched by Western military intelligence with the help of mercenary snipers, praises Stephan Bandera, an extremist of the right who in Ukraine inherited Adolf Hitler’s devotion to the swastika from collaborators of the Nazis in the holocaust of 1.6 million Russian Jews. He praises the neo-Nazis of the Azov Battalion and ultimately recruits the ISIS cutthroats for a democratic battle.

In this sickening tregenda of diabolical hypocrisy, Putin took courage and announced the act that blows up the bank behind which shady financiers rubbed their hands for the arms business regardless of the winner of the war in Ukraine.

Either pay for the gas in rubles, thus revaluing the Russian currency ravaged by global economic sanctions and ostracism, or stay in the cold for the summer.

The Gas & Oil Nightmare for EU and US after Russian invasion in Ukraine. Intel Source

The Kremlin leader has well understood that Zelensky, capable of having one of the peace mediators assassinated by the Ukrainian Security Services SBU precisely because he is influential with Moscow and therefore a potential instrument of a real agreement, is ready to kill up to the last child of the ‘Ukraine in order to carry out its mission of provocation of Russia. Especially because if he changes his mind he could end up like Abraham Lincoln, Dag Hammarskjold, Enrico Mattei, Aldo Moro, or John F. Kennedy…

So here is the Checkmate that leaves open to Western opponents only the solution of throwing the chessboard into the air! Here is the midnight fire challenge for the European Union and NATO: either to give in to financial blackmail or, as the only alternative, to start World War III with a China that has already given its full support to Putin, especially because it is not still worked hard enough by the New World Order for possible future betrayal.

Let’s see if the rulers of the European Union and especially those of Italy will have the courage to challenge the stupidity of their people to the point of convincing them to stay in the cold and with electricity and rationed food so as not to succumb to the blackmail of the Tsar… Or if instead, more fearfully, they will cover up the understandable terror of an assault with pitchforks at Government Palaces…