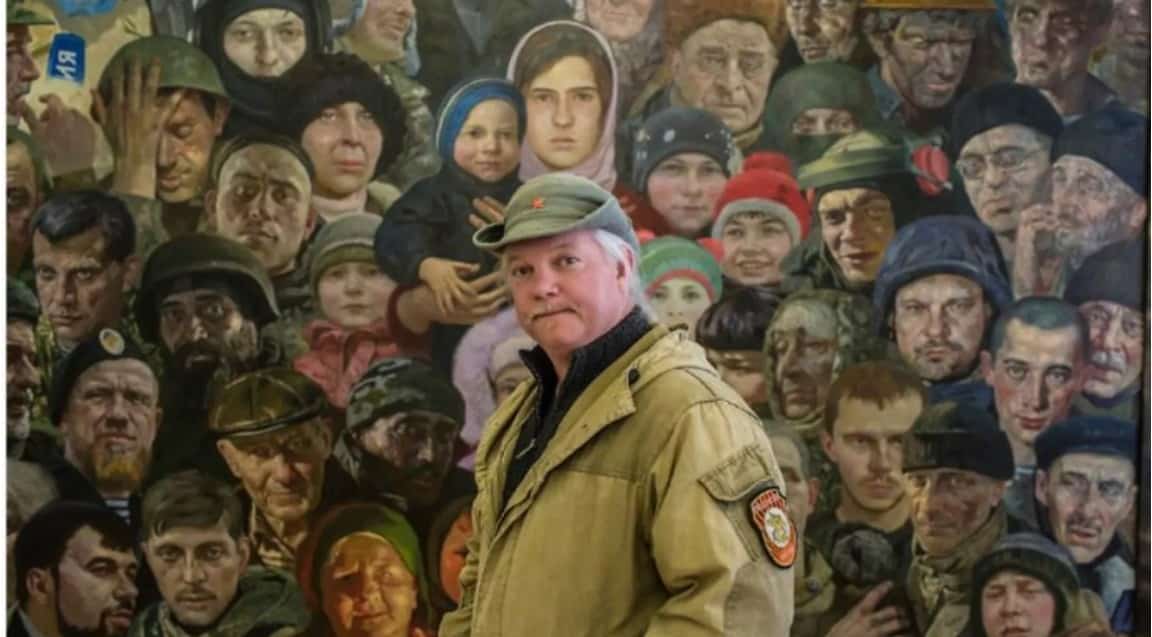 VT Bureau Chief Russell Bonner Bentley, a 61-year old American from Texas, says he couldn’t stop himself from coming to the rescue of the people of Donbass, as they confronted fascism just like their great-grandfathers did 80 years ago. First as a soldier and now as a war correspondent, Bentley is defending the land where he wants to stay for the rest of his life.

“I’ve been here for eight years as a soldier, as a humanitarian aid volunteer,” says Bentley, who was given the codename “Texas” after joining the Donbass militia in 2014. “I worked with the Sut Vremeni [Essence of Time] Combat Unit, also with Vostok Battalion and on Battalion Spetsnaz. I was doing some very hot positions – Donetsk Airport, Spartak, Avdeyevka, Yasinovataya.”

The Donbass veteran saw a “lot of interesting stuff” then. However, what he has seen in the last few weeks since Russia’s Operation Z began is something completely different, according to Bentley. “The Russians are really here now and they’re doing great work,” he says.

“Texas” is laughing at the Western mainstream press that has been claiming for the last eight years that the Ukrainian Armed Forces were fighting against Russian regular troops in Donbass.

The Western mainstream press’ narrative that the Russian forces have become bogged down or that the Ukrainian military is defeating them has nothing to do with reality, according to the American war correspondent.

The Russians are going slowly is because the Ukrainian military and their Nazi battalions are using civilians as human shields, thus forcing Russians to go basically door to door, he explains.

“They used human shields. That’s not just a tactic, it is one of their strategies,” Bentley says. “They’re hiding behind their own civilians in fact, and it’s truly cowardly, it’s truly treacherous, it’s truly dastardly.

“Those who still believe that there are no Nazis in Ukraine should wake up, according to the veteran: “Their Nazi battalions are genuine Nazis, they have swastika tattoos, they say ‘Heil Hitler’ and ‘Slava Bandera’, who was a German Nazi collaborator, a real terrible war criminal.”

The DPR and LPR advance backed by the Russian forces is going slowly, but it’s going according to plan, notes “Texas”. He believes that within two weeks Mariupol – the neo-Nazi Azov Battalion’s stronghold – will fall. “Then it will be the main fortified positions on the Donetsk front, which is Mariinka and Avdeyevka,” he says, adding that once that fall, “it’s going to be the domino effect.”

People of Donbass: ‘They are Salt of the Earth and the Cream of Humanity’

The people in Donetsk City and the Donetsk People’s Republic are filled with joy to meet the Russians, says Bentley.

“I mean, this marks the beginning of the end of the war, and it’s been a long war for everybody here,” the war correspondent notes. “You know, eight years is twice as long as the Second World War, and it’s been horrific, the whole time here.”

Bentley speaks about the Donbass people with warmth and tenderness. According to him, they are “the salt of the Earth, but they’re also the cream of humanity.”

“They’re extremely cultured,” he says. “They’re the most open, generous and kind people I’ve ever known. And I’ve traveled a lot throughout the world.”

However, at the same time, they are some of the most steadfast and brave people in the world, stresses the war correspondent. They step outside every day knowing that it might be the last time they kiss their wife goodbye because the Ukrainian Army is very close and can bomb the Donetsk civilians with mortars and artillery, any time it wants, “Texas” notes.

It’s not the Eastern Ukrainians who started this confrontation, according to him. They tried really hard to reason with Kiev and their fellow Ukrainians from the other side of the contact line, but after they got run over and shot down for it, they did take up arms.

“Once you’re dealing with real Nazis, it’s like a mad dog or a poisonous snake,” Bentley says. “There’s no way to appeal to compassion or justice or humanity. Nazism is a disease. And there’s only one way to cure it, and we’re getting ready to cure it right here in Ukraine permanently.”

From Illegal Bombing of Yugoslavia to US-Backed Coup in Ukraine

One could apparently find it truly mind-boggling why an American from a wealthy Texan family went to the war-torn Donbass and joined the militia ranks to defend the distant land. However, there is a string of events that triggered him.

First, it was the attack on Yugoslavia by Clinton and NATO, which he knew even back then was “a terrible, terrible crime”. Then the US invaded Afghanistan and Iraq. In 2011 the US-led NATO coalition bombed once prosperous and flourishing Libya into the stone age.

“So after Libya, when the Maidan started and Victoria Nuland handing out cookies and John McCain and all that, and I knew what the deal was, I knew exactly what was going on,” says Bentley. “And then I saw the massacre in Odessa on 2 May 2014, where scores of people were burned and beaten to death.”

However, the last straw was the story of Inna Kukurudza, a Donbass resident, who lost both of her legs and died from injuries during the Ukrainian airstrike on Lugansk Regional State Administration on 2 June 2014.

“There was a video made in the aftermath of that airstrike,” Bentley recalls. “She was sitting on the street, in a pool of blood, next to her legs, both of her legs had been blown off by the rockets… And there was a photograph made from that video of her sitting on the ground looking straight up into the camera. And when I saw that photo, I knew for sure I was coming here.”

When Bentley came to Lugansk and visited the memorial commemorating Inna and other civilians that were killed there, he felt that his fate was inextricably bound to that of Donbass.

For eight years Bentley has served both as a soldier and an aid volunteer. Together with an Orthodox Christian woman from Florida and Father Boris, who became his godparents, the war correspondent started the Donbass Humanitarian Aid fund.

“We’ve brought in more than a hundred thousand dollars from US and Western donors for human aid here,” Bentley says. “We work mainly with kids, kindergartens, orphanages, churches. We’ve repaired a lot of homes that got bombed by Ukrainian artillery.”

Even though most Americans have no idea what is happening in the Donbass, there are people ready to lend a helping hand. Apparently, there would be more of them, if the Western press did not silence Kiev’s eight-year-long war on eastern Ukraine. Currently, the Western mainstream media is distorting reality, according to the war correspondent.

“I would say that everything that they see on CNN and Fox News is a lie,” he says. “The mass media, everything they say is a lie. It is. It is a professional deception operation, even if they say something that’s factually true. They do so only in order to deceive you.”

Bentley says that he is waging a personal information war with the American MSM because he believes in truth and justice and wants to make a better world for everybody, equally. He will not back down and he is here to stay.

“There’s no place I’d rather be,” the veteran says. “Donetsk, the city of Donetsk, is my home and I’m going to live here the rest of my life.”