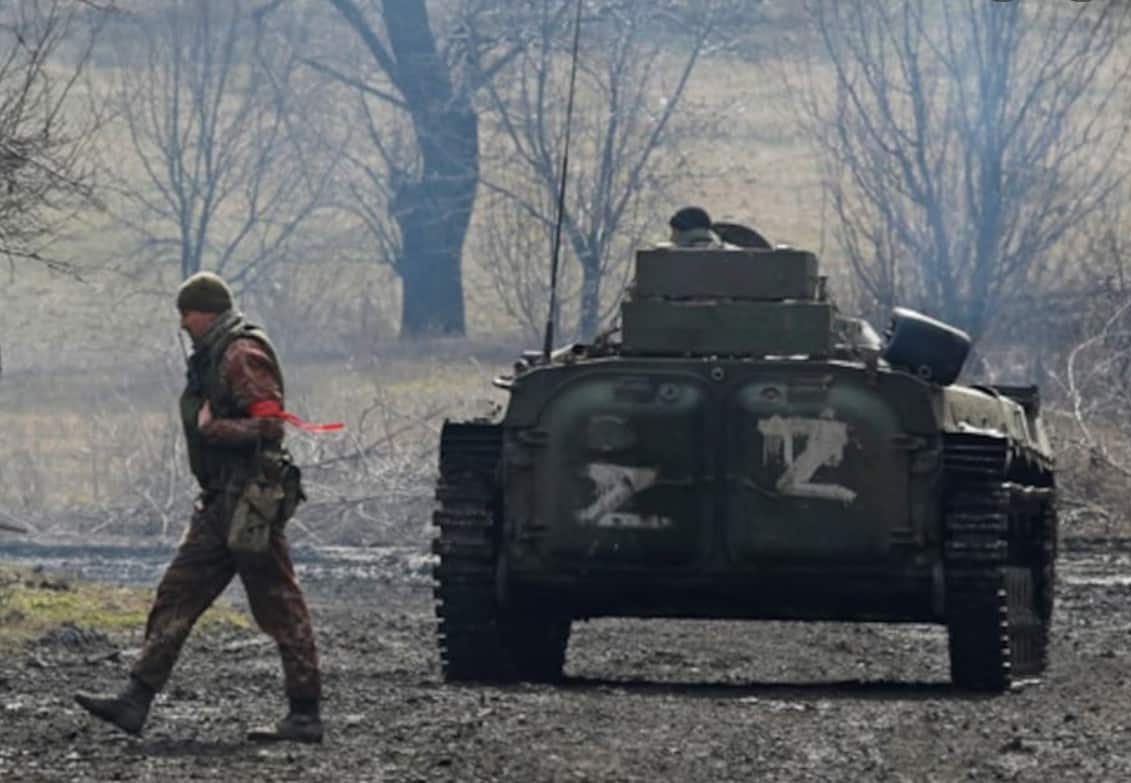 SouthFront – The main military developments of the last days of fighting in Ukraine were the partial withdrawal of Russian troops from the Kiev and Chernihiv regions and their advance in the East of the country, taking full control of the strategically important town of Izyum in the Kharkiv region.

In the Kiev region, in the North-Western direction from the capital, the AFU took control of several towns, where fierce fighting continued for weeks. The Kiev grouping of the Ukrainian Armed Forces confirmed control over the cities of Borodyanka, Bucha, Vorzen, Gostomel, and Ivankov. The Ukrainian Armed Forces unblocked the Kiev-Zhytomyr highway as well.

The main front line in the north-West of the capital probably remains in the Gostomel-Bucha-Oziora area. On April 1, the Russian MoD reported that airborne and marine units of the Armed Forces of the Russian Federation took full control of the five-kilometers long territory from the Irpen river towards Kiev.

” Units of the Russian airborne troops in cooperation with marines during a special military operation in Ukraine have successfully deterred enemy forces in the Gostomel-Bucha-Oziora area for five days. As a result, the marines were able to take full control of the territory from the Irpen river towards Kiev with a total length of five kilometers.” – the report reads.

To the east of Kiev, the front line has moved about 130 km away from the Ukrainian capital and now lies near the city of Priluki in the Chernihiv region.

The decision to reduce its military operations in the Kiev region was presented by the Russian side as a concession to Kiev aimed at the facilitation of the negotiation process between the two sides. The main goal of reducing the Russian military contingent in the Kiev and Chernihiv regions is certainly the strengthening of the Russian and L/DPR groupings in the Donbas region.

The decision to partially withdraw from the Kiev region is also due to the difficulties faced by Russian forces near the Ukrainian capital.

Russian troops suffered significant difficulties with logistics in this region. Russian soldiers stayed in field conditions for weeks and had no opportunity to gain a foothold in the heavily destroyed towns in the suburbs of the capital after the fighting.

All supplies were carried out from the territory of Belarus, through the Chernobyl region, which is located hundreds of kilometers from the front lines. Ivankov was the main supply point of the Russian grouping to the west of Kiev. The advance of the Russian troops faced stiff resistance from the AFU, significant losses were suffered.

Since most of the bridges across the Dnieper River were destroyed or were located in the deep rear in the north, there were almost no communications established between Russian groupings on different banks of the Dnieper River.

In the east of the capital, logistic supplies also affected Russian warfare. Russian troops established control over the Kiev-Sumy highway for hundreds of kilometers but nearby areas were not secured. Russian columns were regularly subjected to flank attacks.

Hours after the Russian Ministry of Defence proclaimed the partial withdrawal of Russian troops from the Kiev region, the capital faced the most fierce artillery fire exchange. The AFU shelled Russian forces when they were leaving, and Russian artillery returned fire. As a result, civilians who remained in these areas suffered.

Russian military columns are spotted heading toward Eastern Ukraine. Both sides are reinforcing their positions in Eastern Ukraine. So far, the situation on the front lines remains almost unchanged, except some minor changes in the hotspots. Positional clashes continue.

the Kharkiv region clashes continue near the city of Kharkiv, where one of the hotspots is the area of Soltovki.

The governor of the Sumy region said that Russian troops have begun to strengthen control over the territory of the region.

In recent days, the strategic success achieved by the Russian forces was the securing of the town of Izyum, where fierce fighting continued for several weeks, especially in the southern part of the town. Russian servicemen delivered humanitarian aid to the town of Izyum for the first time since the beginning of the Russian special military operation. Accompanied by the Military Police of the Russian Armed Forces, the humanitarian aid included more than 45 tonnes of supplies.

Russian strikes with missiles from the 9K720 Iskander-M missile system on the fortification of the Ukrainian army in the vicinity of Izyum in the Kharkiv region:

In the south of the Kharkiv region, according to some local reports, the AFU are strengthening their positions near Barvenkovo, southwest of Izyum. The village is one of the potential directions of the Russian advance in the region, along with Slavyansk and Lozova to the southeast.

Earlier, clashes were reported near the village of Gusarovka located between Izyum and Barvenkovo. The village is under AFU control.

On the Donbass front lines, fierce fighting between the units of the armed forces of the Donetsk People’s Republic and the AFU continues in the town of Novobakhmutovka to the north of Avdiivka. Units of the Ukrainian 25th Separate Airborne Brigade are slowly retreating. During the night, up to 40 Nationalists, a tank platoon, and 2 motorized infantry platoons, as well as a mortar battery, were destroyed in this area, according to the Russian Ministry of Defence. DPR forces control most of the territory.

In the town of Avdiivka, the AFU take their time to reinforce their positions, preparing for defense.

About 35% of the territory of the town of Maryinka was reportedly taken under the DPR control days after the street fighting broke out in the town. One of the most heavily fortified positions was established in the area.

Fierce clashes continue near Popasna. No advances were reported by any side.

In the city of Mariupol, some strategic advances were claimed by the DPR. Nationalist forces were divided into three smaller groupings. The main stronghold of the Azov regiment was reportedly blockaded. The two other centers of resistance are the city central region and the city port located to the west of Azovstal and which was cut off by the joint Russian, DPR forces. The major assault of Azovstal may be launched in the coming days, if not on April 2.On April 1, the head of Chechnya, Ramzan Kadyrov, gave the Azov fighters one day to surrender.

The front lines in the southern regions of Ukraine are not calm.

On April 1, units of the Russian Armed Forces have completed the mopping-up of Urozhainoe from nationalists and are fighting with the Ukrainian 54th Separate Mechanized Brigade for the capture of Oktyabr state farm.

Onyx high-precision cruise missiles of Bastion coastal missile system have destroyed the headquarters of a group of Ukrainian troops near Shakhterskoe. Up to 40 personnel, 5 armored vehicles, and vehicles of various purposes were destroyed.

The main resistance of the AFU to Russian forces is provided on the borders of the Mykolaiv and Kherson regions. So far, with no significant successes.

The Russian units are reinforcing their positions near the town of Mykolaiv. It was reported that the AFU was amassing in the area of Dneprovskiy Liman to the south of Mykolaiv, near the city of Kherson.

Russian forces took control over the village of Alexandrovka in the area. So far, no fierce clashes were reported in the region, the AFU offensive is likely yet to come.

Early on April 2, high-precision long-range air-based and sea-based weapons destroyed gasoline and diesel fuel storages at the Kremenchuk oil refinery, from which Ukrainian troops in central and eastern parts of the country had been supplied.

The Kremenchuk oil refinery was claimed to be the last large refinery in Ukraine, which processed about 18 million tons of oil per year.

Another large Shebelinsky oil refinery is located near Kharkiv. It was stopped on February 26 because of the fighting. However, it was not destroyed, so the work there may resume soon. The capacity of the Shebelensky refinery is only 1 million tons of fuel per year.

High-precision air-based missiles have disabled military airfields in Poltava and Dnepropetrovsk. It is reported that at least 4 missiles hit at the airfield and part of the air defense in Poltava.

According to the Russian Ministry of Defence, Russian air defense means have shot down two Ukrainian Mi-24 helicopters near Sumy and Urozhainoe.

On April 1, it was claimed that Russian air defense means have shot down 1 Ukrainian Mi-24 helicopter near Gulyai Pole and 4 Ukrainian unmanned aerial vehicles near Novomikhailovka, Izyum, and Kharkov.

On 1 April, at around 5am Moscow time, two Ukrainian Mi-24 helicopters entered Russian airspace at an extremely low altitude. Maneuvering to the advantage of terrain folds, Ukrainian helicopters launched a missile attack on a civilian oil storage facility on the outskirts of Belgorod. As a result of the hits, some of the tanks were damaged and ignited.

Only civilian vehicles were supplied with fuel from this facility. The oil depot has no relation to the Russian Armed Forces.

Strikes of the AFU on the civilian areas in the Belgorod region were silenced by the Russian Ministry of Defence and the media. No casualties or damage were reported.