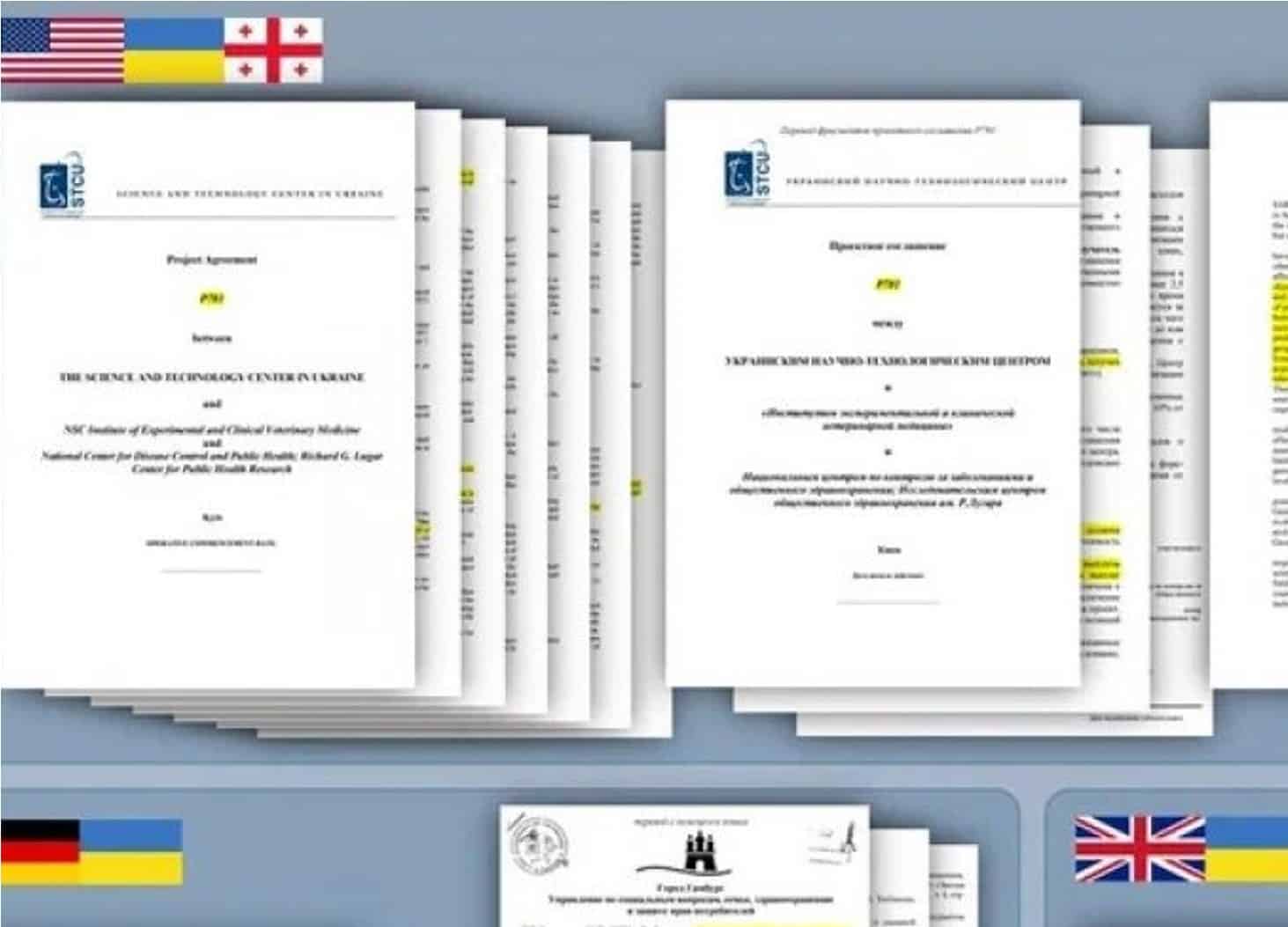 ️The Russian Defence Ministry continues to study materials received from employees of Ukrainian laboratories on the implementation of military biological programs of the United States and its NATO allies on the territory of Ukraine.

Western mass media and some biologists, who most often have a second American citizenship, express doubts about the reliability of the materials published by us. I would like to draw your attention to the fact that the documents have the signatures of real officials and are certified by the seals of organizations.

We believe that components of biological weapons were created on the territory of Ukraine.

Here is a document dated March 6, 2015, confirming the Pentagon’s direct participation in the financing of military biological projects in Ukraine.

According to established practice, American projects in the field of sanitation in third countries, including in Africa and Asia, are funded by national health authorities.

I would like to draw your attention to the fact that the agreement on joint biological activities was concluded between the US Military Department and the Ministry of Health of Ukraine. However, the real recipient of funds is the laboratories of the Ukrainian Ministry of Defence located in Kiev, Odessa, Lvov and Kharkov. The total funding amounted to $32 million.

It is no coincidence that these Biolabs were chosen by the US Defence Threat Reduction Agency (DTRA) and the contractor company Black & Veatch as the executors of the UP-8 project aimed at studying the pathogens of the Congo-Crimean hemorrhagic fever, leptospirosis, and hantaviruses.

The corresponding request of the Pentagon to involve Ukrainian laboratories for the implementation of the project is presented on the slide. From our point of view, the interest of US military biologists is due to the fact that these pathogens have natural foci both on the territory of Ukraine and in Russia, and their use can be disguised as natural outbreaks of diseases.

That is why this project has received additional funding, and the terms of its implementation have been extended.

️A study of the documents in the part of the P-781 project on the study of ways of transmitting diseases to humans through bats showed that the work was carried out on the basis of a laboratory in Kharkov together with the infamous R. Lugar Center in Tbilisi.

The total costs of the Pentagon for its implementation in Ukraine and Georgia amounted to $ 1.6 million, most of which was received by Ukraine as the main contractor.

The documents received by the Russian Ministry of Defence indicate that research in this area is systematic and has been conducted since at least 2009 under the direct supervision of specialists from the United States within the framework of projects P-382, P-444, and P-568. One of the curators of this activity was the head of the DTRA office at the US Embassy in Kiev, Joanna Wintrall. Maybe journalists should talk to her?

️During the implementation of these projects, six families of viruses (including coronaviruses) and three types of pathogenic bacteria (pathogens of plague, brucellosis, and leptospirosis) were identified. This is due to the main characteristics of these pathogens that make them favorable for the purposes of infection: resistance to drugs, rapid speed of spread from animals to humans, etc.

It is necessary to note a number of documents confirming the transfer of bioassays selected in Ukraine to the territory of third countries, including Germany, Great Britain, and Georgia.

Here are official documents confirming the transfer of five thousand samples of blood serum of Ukrainian citizens to the R. Lugar Center affiliated with the Pentagon in Tbilisi, 773 bioassays were transferred to the reference laboratory of Great Britain. An agreement has been signed for the export of unlimited quantities of infectious materials to the Loeffler Institute in Germany.

️An analysis of the information received indicates that Ukrainian specialists are not aware of the potential risks of transferring biomaterials, are being used essentially blindly, and have no real idea of the true purpose of the research being conducted.

I would like to draw attention to outbreaks of economically significant diseases on the territory of the Russian Federation. In 2021 alone, the damage from highly pathogenic avian influenza exceeded 1.7 billion rubles, and 6 million heads of poultry were destroyed. At the same time, in European countries, the losses of the agricultural industry from it amounted to about 2.0 billion. euro.

️Within the framework of the FLU-FLYWAY project, the Kharkov Institute of Veterinary Medicine studied wild birds as vectors for the spread of highly pathogenic avian influenza. At the same time, the conditions under which spread processes can become unmanageable, cause economic damage and pose risks to food security have been assessed.

️These documents confirm the involvement of the Kharkov Institute in the collection of avian influenza virus strains with high epidemic potential and capable of overcoming the interspecific barrier. The activities of this institute should be the subject of an international investigation.

Information continues to be received about attempts to destroy biomaterials and documentation in laboratories in Ukraine.

We know that during the liquidation measures in the laboratory of veterinary medicine in Khlebodarskoye, working employees (citizens of Ukraine) were not even allowed into the building! This laboratory cooperates with the Anti-Plague Research Institute named after Mechnikov in Odessa, which conducts research with pathogens of plague, anthrax, cholera, tularemia, and arboviruses.

In an attempt to cover their tracks, biological waste from the laboratory in Khlebodarskoye was taken 120 km away towards the western border to the area of Tarutino and Berezino settlements. All these facts are recorded by the Ministry of Defence for subsequent legal assessment.

It is necessary to mention the emergency destruction of documents in the Kherson biological laboratory.

One of the reasons for such a rush may be the concealment of information about the outbreak of dirofilariasis, a disease transmitted by mosquitoes, that occurred in Kherson in 2018. The question arises why four cases of infection were detected in February, which is unusual for the life cycle of these insects. In April 2018, representatives of the Pentagon visited local healthcare institutions, where they got acquainted with the results of the epidemiological investigation and copied medical documentation.

However, no documentary evidence has been found concerning this outbreak in the Kherson laboratory. Proceeding from this, we believe that the urgency of destroying such documentary evidence is explained by the desire to prevent them from getting to Russian specialists.

️In addition, attention is drawn to the fact of a sharp increase in cases of tuberculosis caused by new multi-resistant strains among citizens living in Lugansk and Donetsk people’s republics in 2018. These data are confirmed by specialists of Rospotrebnadzor.

During the mass outbreak recorded in the area of Peski settlement, more than 70 cases of the disease were detected, which ended in a rapidly fatal outcome. This may indicate a deliberate infection or an accidental leakage of the pathogen from one of the Biolabs located on the territory of Ukraine.

In accordance with the Convention on the Prohibition of Biological and Toxin Weapons, the participating States submit to the UN information about objects and ongoing biological activities.

These are Confidence-building measures that are published in order to monitor the implementation of the Convention. Since 2016 – the moment of the beginning of the implementation of the projects mentioned by us (including UP-4, UP-8, and P-781), the USA and Ukraine have been deliberately silent about them in international reporting, despite their obvious military-biological orientation.

Such secrecy is another reason to think about the true goals of the Pentagon in Ukraine.
I would like to remind you of the historical facts when such irresponsible activities of the United States outside of national jurisdiction ended only with formal apologies from the
American administration.

So, in October 2010, US President Obama acknowledged the fact of conducting illegal research on Guatemalan citizens who were intentionally infected with syphilis and gonorrhea pathogens with the approval of the White House.

The Russian Federation has repeatedly called for the publication of data on the military biological activities of the Pentagon on the territory of third countries, but the collective West, led by the United States, consistently blocks this initiative, preferring to conduct research bypassing international obligations with “someone else’s hands”.

We will continue to study the evidence and inform the world community about the illegal activities of the Pentagon and other US government agencies in Ukraine.