As we see the names, it’s all the same…those who cover Israeli war crimes or covertly support ISIS, al Qaeda, and False Flag terrorists

RT.com – During the last week of March, multiple major media outlets in the UK and the US ran stories about Ukraine’s ‘Azov Battalion, seeking to whitewash almost a decade of previous reporting that clearly identified the unit’s Nazi sympathies and ethos. Supposedly acting independently, they nonetheless stuck to the same talking points and often the same verbiage, suggesting a concerted effort to spin the unit as heroic defenders of Ukraine against the alleged “real” fascists – the Russians.

The latest wave of the lionization of Azov began sometime before the Russian military operation – notorious was the much-publicized image of an AK-47-wielding Ukrainian granny training to repel invaders in the regiment’s camp. The last week of March, however, saw the puff pieces come in a tight group, like the bullet holes after an AK burst.

The first of the bunch was a ten-minute video, from Britain’s state-broadcaster BBC, on March 27, in which presenter Ros Atkins sought to debunk Russian “untruths” about Nazis in Ukraine. How can Ukraine be “held hostage” by Nazis when its president, Volodymyr Zelensky, is Jewish, Atkins argues, pointing to his 73% of the vote, at the last election, and triumphantly declaring that, “No far-right groups have any formal political power in Ukraine.” Remember that word, “formal” – it does a lot of heavy lifting here.

Atkins’s piece set the tone for the articles that followed. Two days later, on March 29, the Financial Times ran a story describing Azov as “key to the nationwide resistance effort.” While it acknowledges that Azov was created in 2014 “by volunteers with nationalist and often far-right political leanings,” the FT shrugs off its Nazi connections.

Thus, the Nazi symbols used by the unit itself are described as “now claimed as pagan symbols by some battalion members.” This is taken at face value but is literally untrue. The “Black Sun” (also known as the Sonnenrad) dates back to a mosaic commissioned in the 1930s by the Nazi SS head Heinrich Himmler, while the overlaid Wolfsangel rune – historical German, not Ukrainian heraldry –  was used by several Wehrmacht and SS regiments, as well as the Dutch Nazis, during WWII. More to the point, the symbols themselves were picked out by Azov founder Andriy Biletsky – a notorious white supremacist – as he himself told another outlet back in 2014.

FT reporters actually get a quote from Biletsky – none of this sordid past is mentioned – but the key quote comes from one Anton Shekhovtsov, who claims that “Azov depoliticized itself” and its “history linked to the far-right movement is pretty irrelevant today.” We’re supposed to just take the word of a professional Ukrainian “expert on Russia’s connections to Europe’s far-right,” because, as Azov fighters themselves say, Russians are the real Nazis!

The cherry on top of the cake is a request by one Azov fighter – identified only as Kalyna – “not to confuse the concepts of patriotism and Nazism.”

Meanwhile, FT describes Stepan Bandera – the notorious Ukrainian nationalist who tried to collaborate with the Nazis and oversaw the mass murder of Poles and Russians – “a nationalist leader who opposed both Nazi and Soviet efforts to prevent Ukraine’s independence.”

That same day, March 29, CNN ran its own version of the story. Zelensky is Jewish, check. Azov has a “history of neo-Nazi leanings, which have not been entirely extinguished by its integration into the Ukrainian military,​” but is “an effective fighting force,” check. Azov’s political wing only won 2.15% of the vote in 2019 – quoting a German researcher this time – check.

They too mention Biletsky, but say he allegedly spoke of wanting to “lead the White races of the world in a final crusade” – leaving out the part that says “against the Semite-led Untermenschen.” They then quote Azov denying he ever said so, and anyway they have “nothing to do with his political activities and the National Corps party” – even though CNN itself describes it as Azov’s “political wing.”

CNN also dredged up a 2019 quote from Arsen Avakov – police minister in the post-Maidan government – in which he claims that accusations of Nazi ties are “a deliberate attempt to discredit” Azov and the Ukrainian military. This is the same Avakov whom Ukraine’s chief rabbi, Yaakov Bleich, criticized in November 2014, saying he “continues to appoint people of questionable repute and ideologies tainted with fascism and right-wing extremism” [emphasis added]. 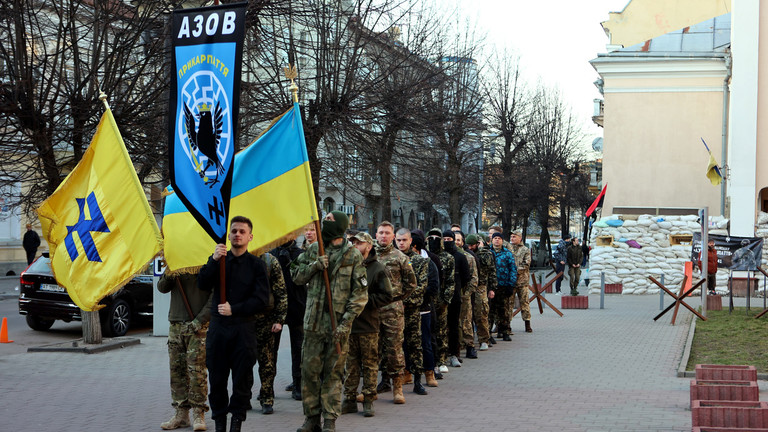 Last but not least, there’s the Times of London on March 30. Its story opens with the emotional description of a funeral for an Azov soldier killed in the fighting outside of Kiev.

They too dismiss Nazi iconography as may be rooted in Ukraine’s “original pagan faith,” though they admit to “Azov’s trademark Wolfsangel, also used by Nazi Germany.”

“We are patriots but we are not Nazis,” is a quote attributed to Azov officer Yevgenii Vradnik, and gives the story its title. Towards the end, the Times quotes an Azov commander in Mariupol, who accuses the Russians of being “the real Nazis of the 21st century.” Check and check.

As an aside, Azov members are apparently really good at sticking to the message – and knowing their audience and which buttons to push. For example, the Times piece repeatedly mentions their praise of the British NLAW anti-tank rockets.

Contrast this to some of the сoverage Azov got in the West before 2022. Back in January 2021, TIME magazine called them a militia that had “trained and inspired white supremacists from around the world.”

“Azov is much more than a militia. It has its own political party; two publishing houses; summer camps for children; and a vigilante force is known as the National Militia, which patrols the streets of Ukrainian cities alongside the police,” the Time article says, noting that “it also has a military wing with at least two training bases and a vast arsenal of weapons, from drones and armored vehicles to artillery pieces.”

They also paraphrase the words of Azov’s “head of international outreach” Olena Semenyaka, who told them during a 2019 tour of the Cossack House that the group’s mission was to “form a coalition of far-right groups across the Western world, with the ultimate aim of taking power throughout Europe.”

Before the events of 2014, Biletsky led a “neo-Nazi terrorist group” called Patriot of Ukraine, whose “manifesto seemed to pluck its narrative straight from Nazi ideology,” says TIME. In an interview after the coup, he told the magazine he picked out Azov’s insignia. No mention of “pagan” symbols, either, only a reference to the Black Sun and Wolfsangel being “used by Germans” in WWII.

Even Bellingcat, that “open-source intelligence collective” apparently serving as a conduit for the British intelligence agenda, has raised red flags about Azov. Here they are in October 2019, complaining about how the militants browbeat Zelensky into not withdrawing from the Donbass as required by the Minsk agreements.

Though the “far-right groups” have “negligible popular support and virtually nonexistent electoral power” – remember Atkins’s talking point earlier? – they “continue to have success mainstreaming themselves in Ukrainian politics and society,” said Bellingcat.

This isn’t exactly the first time the corporate and state media in the West have run cover for a group they themselves had until recently described – correctly – as extremist. For example, just last year, the US public television sought to whitewash Al-Qaeda affiliates in Syria – the Al-Nusra Front, later “rebranded” as Hayat Tahrir al-Sham – as “moderate rebels.”

Politics and war make for strange bedfellows, sure, but if your bedfellows are open admirers of Adolf Hitler and Stepan Bandera, perhaps it’s time to revisit that 2012 BBC Three comedy sketch and ask, “Are we the baddies?”

Nebojsa Malic is a Serbian-American journalist, blogger, and translator, who wrote a regular column for Antiwar.com from 2000 to 2015, and is now a senior writer at RT.