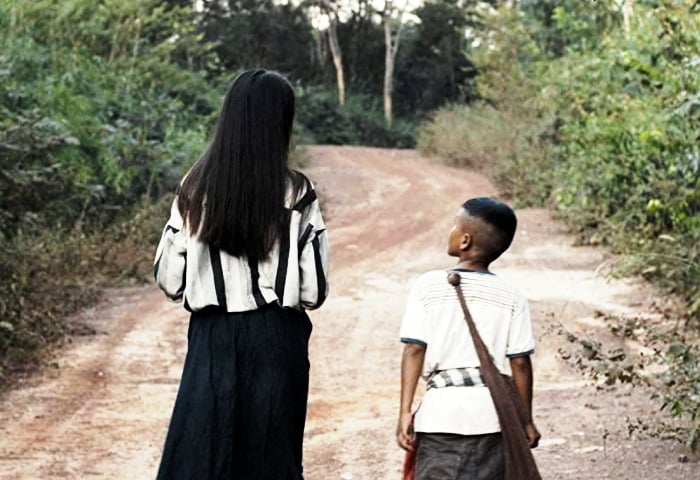 The Long Walk follows an unnamed old man (Yannawoutthi Chanthalungsy) and a young boy (Por Silatsa), both of whom can talk to spirits. One in particular (Noutnapha Soydara) joins them during long walks along forested roads for decades on end, though it never speaks a word.

When numerous women go missing, authorities tap the unnamed man for assistance, but he might be more interested in undoing the flaws of his past with help from his spirit friend.

In a strike against the Asian Orientalism that continues to plague Western filmmaking, Laotian-born director Mattie Do builds her world from everyday Laotian anxieties: Namely, the belief that bodies not properly cremated bear spirits that find themselves stuck wandering the Earth.

Deeper Buddhist themes reflecting life, death, and rumination make for a sturdy, if pessimistic, undercurrent. Here, the living isn’t frightened by ghosts so much as they are the more earthbound fears they illicit. If a dissatisfied ghost can be stuck on Earth for eternity, is there a point in striving for a type of perfection already disproved by the very existence of these stuck spirits?

It’s too easy to call The Long Walk a horror film or a psychological trip. It’d have to be stretched, stuffed, and disjointed if you wanted it to fit into more mainstream horror definitions, or as I like to call it, the old stab-stab/jump-jump. Do’s opus doesn’t fit neatly into any genre, in fact, and a viewer can’t expect any coddling from her. Her elements of Asian futurism are not deeply crafted (everyone in this future has a microchip installed) but they do emphasize a common misconception that tech and tradition are mutually exclusive.
But then, The Long Walk is a film of ideas—and what a success it is.