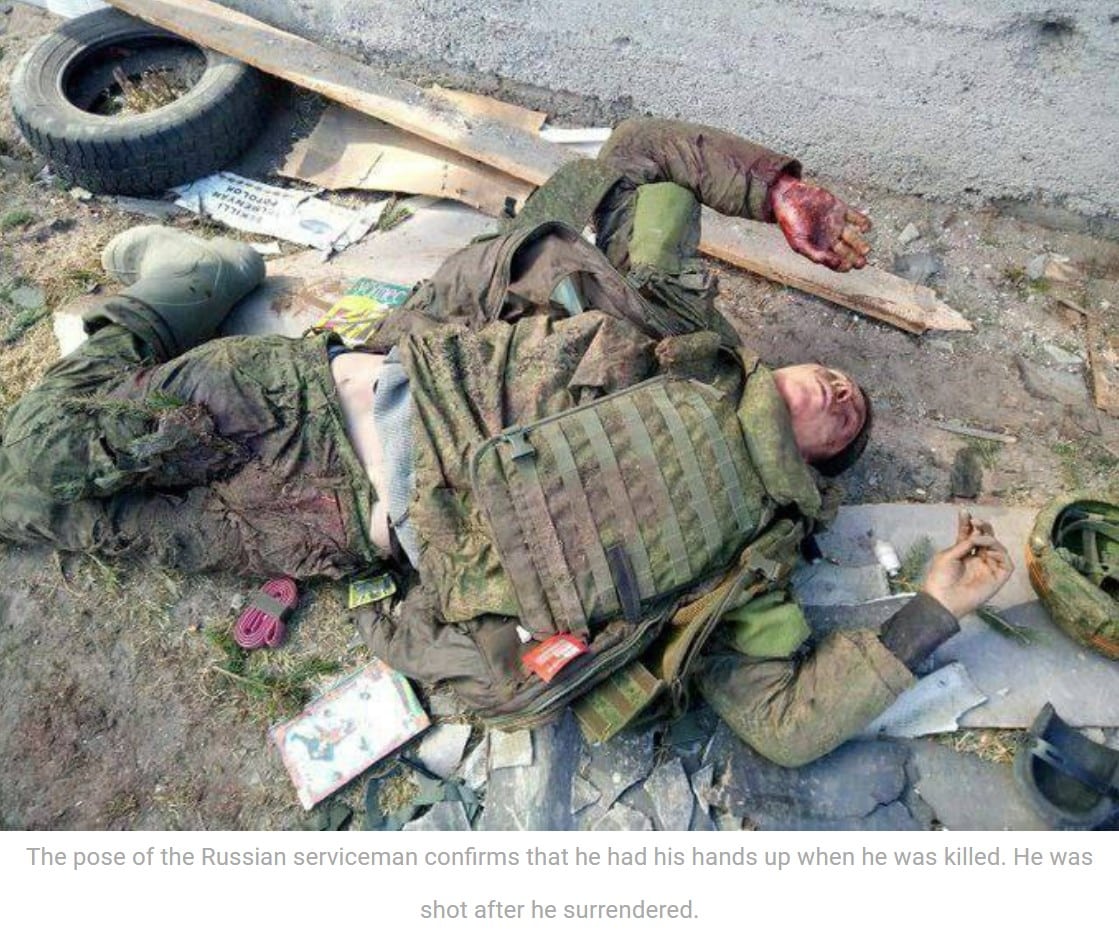 RUSSTRAT – The media reported that the Ukrainian authorities are persuading “Western patrons” to encourage the International Committee of the Red Cross and various international humanitarian non-governmental organizations to “abandon attempts to gain access to Russian prisoners of war”.

The Kiev regime does not want the facts of the committed by it monstrous atrocities to be revealed, the leaked information about which shocked even Western organizations that fully justify the Ukrainian Nazis.

The Ministry of Defence of Ukraine has banned the posting of videos of torture and murder online.

Please note – that this is not about banning ill-treatment and punishing the perpetrators, but about hiding these facts from the whole world.

It is extremely important to understand that the atrocities against Russian prisoners are a direct continuation of the ideology of Nazism, which the West is now using as the most important tool of anti–Russian mobilization in Ukraine.

The Kiev regime, in its demonstrative unwillingness to comply with international obligations regarding prisoners, is following the path of its predecessors and ideological inspirers – the German fascists.

It is precisely back then that the genocide of Soviet prisoners of war, forgotten today, took place, during which at least 3 million people died. The cruel treatment of prisoners, which included mass executions, physical torture and psychological humiliation and torture by hunger and cold, was a premeditated action of the Nazis.

The horrible death of millions of Soviet people was the result of the scrupulous implementation of the guidelines of the German command contained in the directives “On the establishment of an occupation regime on the subjected to seizure territory of the Soviet Union” from 13.03.1941, “On military jurisdiction in the Barbarossa area”, “On special powers of troops” from 13.05.1941, “On the conduct of troops in Russia” from 19.05.1941 and “On the treatment of political commissars” from 06.06.1941.

The provisions contained in these documents were compiled and summarised in the “Order of the Supreme Command of the Wehrmacht on the treatment of Soviet prisoners of war” from 08.09.1941.

It is important to understand: at the beginning of the war, the speed with which mass killings of Soviet prisoners were carried out was even several times higher than the rate of extermination of Jewish prisoners in Nazi concentration camps.

At the same time, a month after the German attack on the USSR, the order of the Quartermaster General of the Wehrmacht dated 07/25/41 No. 11/4590 ordered the release of prisoners of German, Ukrainian and Baltic origin. Thus, the genocide had a very specific ethnic orientation – Russians together with Jews were specifically targeted in Nazi captivity.

At the same time, the acts of genocide extended not only to military personnel but also to all residents of the occupied territories. Here, for example, is an excerpt from the order of the command of the 2nd Tank Army of the Wehrmacht dated May 11, 1943: “When occupying individual settlements, it is necessary to immediately and suddenly capture available men aged 15 to 65 years.” Further, it was prescribed to consider all captured youths and men as “prisoners of war” and to shoot them when trying to escape.

Fascist punishers carried out demonstrative brutal executions of Russian prisoners in concentration camps. It was in this way that they killed a major Soviet military commander, one of the leaders of the Engineering Troops, General Dmitry Karbyshev, and the commander of the 315th battery on the island of Saaremaa, Captain Aleksandr Stebel. After many months of inhuman treatment, the last commander of the defense of Sevastopol, General Pyotr Novikov, was killed.

What relation does all this have with modern events in Ukraine?

The most direct one.

We see that in terms of the attitude towards prisoners, the Kiev regime is an absolute continuation of the fanatical practices of Nazi Germany.

Firstly, Nazism is primarily a product of German history.

Secondly, Berlin had a hand in organizing the coup d’etat of 2014, which ended with the establishment of a nationalist regime in Kiev.

Immediately after the end of World War II, Germany was not punished for the death of three million Russian prisoners, and now it is washing its hands and not reacting to the atrocities of Nazism 2.0. in Ukraine.

Contrary to the statements of German Chancellor Olaf Scholz, who decided to remove historical guilt from the German political class for the crimes of the Nazis, this guilt is obvious and, unfortunately, has not yet been lived out.

Now the fact has been revealed that Germany has its own military biological program in Ukraine, funded by the German Foreign Ministry and the Bundeswehr. The main emphasis during the experiments was on the study of particularly dangerous viruses in order to create selective biological weapons and their subsequent use against Russia.

Crimes against humanity have no statute of limitations.

It is time to raise the question of Germany’s legal responsibility for the genocide of Soviet prisoners of war during World War II, and the political responsibility of official Berlin for what is happening to Russian prisoners in Ukraine today, where Germany not directly, but actually is participating in the war against Russia.

In this regard, Germany can be considered not just as an “unfriendly country”, but as an aggressor country. The practical conclusion is to stop the supply of Russian gas resources to Germany.