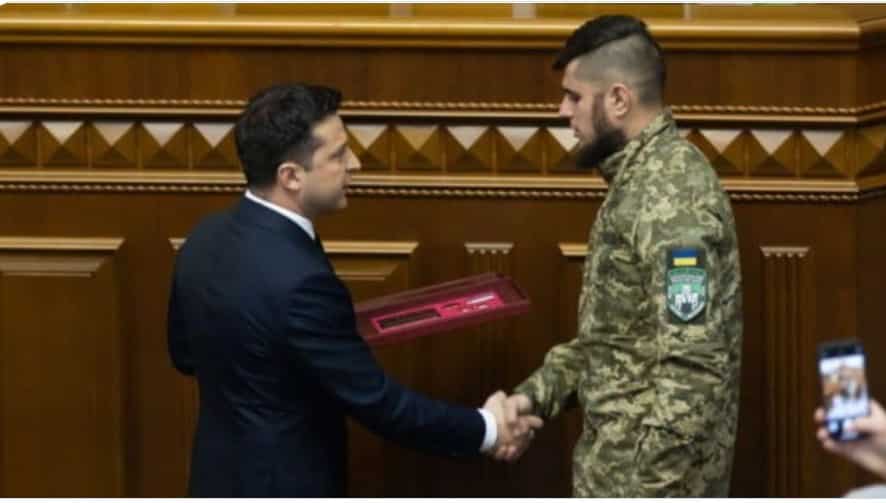 SVPressa: The loss of Mariupol and most of the Nazi Azov Bn. along with Russia poisoning Zelensky’s plan to use poison gas on his own people led to Bucha.  Zelensky ordered the slaughter, and investigations will show how much of it was Azov slaughter after Russia withdrew and how much was staged by NATO/Polish film crews that accompanied Azov.

We saw it all over and over in Syria, with Reuter’s film crews along with White Helmets, ISIS and al Qaeda, and teams of fake journalists, always from Israel.  Sometimes it was a real gas, Sarin from American labs in Georgia, sometimes nothing at all as with Khan Sheikhun.

Now, its dead in the streets, a combination of Zelensky’s comedy theatre, much like his green-screen performances from Poland where he pretends to be on the battlefield.

The fact that Ze and Co. are preparing a large-scale provocation against Russian troops was reported by Ukrainian bloggers close to the office of President Zelensky on March 19. Even then it was clear that Kyiv, although losing to Moscow on the battlefield, was using information weapons to the fullest, and quite successfully.

According to the talking heads there, something must happen in Ukraine that would horrify the entire European and American society, which is not ready to tighten its belt for the sake of Bandera.

It was assumed that the terrible “war crime” of the Russians staged by the “quarters” would be timed to coincide with the loss of “Azov” * in order to overshadow the Nazi catastrophe in Mariupol and raise the fallen spirit of the Armed Forces of Ukraine.

“Our source (in the OP) reports that after Bucha, the West will definitely give us heavy weapons, and possibly aircraft. Although all this time Western officials resisted and did not want to give it to us … That is why now in our and Western media they are dispersing the message “Buchanskaya Massacre” ”, – this or something like this, the Zhovto-Blakit telegram channels write about the next informational victory of Banderstat.

But “Bucha” was also needed by “Ze” to solve other problems that cause persistent rejection among the bulk. The fact that the Ministry of Defense of the Russian Federation cites reinforced concrete evidence of the non-participation of our troops in war crimes is generally ignored in the Zapadenschina.

So, Arestovich, the media worker of the OP, who can be safely called the yellow-blaky Goebbels, adheres to the rule: the more terrible the lie, the easier it is to believe in it. He, squeezing out a mean actor’s tear, has been screaming for two days now about the Ukrainian women burned after the rape and the murdered small children.

Meanwhile, literally on the eve of the “Buchin Massacre”, black clouds began to gather over the head of the comedian and his PR team already inside Ukraine. The fact is that the Germans leaked information about the Kremlin’s proposal on the neutrality of the “square” in exchange for the peaceful existence of Moscow and Kiev, transmitted on February 17 by Chancellor Scholz to the President of the Banderstadt. All Ze had to do was to abandon the movement towards the North Atlantic Alliance and stop bombing the LDNR. As soon as this news hit Ukrnet, yellow-Blakit social networks exploded with indignation.

And Ukrainians were outraged by the secret deal between Kiev and Ankara. Information has leaked into the media space that Zelensky plans to fully lease four unique An-124 Ruslan transport aircraft in exchange for the supply of Turkish attack drones.

“At present, the transaction is already close to completion. Its beneficiary will be the Turkish company Baykar Makina, which produces Bayraktar TB2 drones. Ukrainian crews will remain on the planes, and maintenance will be carried out by Ukrainian specialists. But the Turkish company will take orders for transportation, as well as receive all the profits. The lease agreement is concluded for 30 years. That is, in fact, until the end of the life cycle of the An-124. In return, Baykar Makina agreed to supply Bayraktar TB2 complexes to Kiev, ”the Zhovto-Blakit social networks reported and repeatedly reposted this.

People were outraged to the core. For many Ukrainians, Ruslans are a matter of national pride. But for the Banderaites, who seized power during the coup d’état, the heavy An-124 transporters turned out to be a communist thorn in the yellow-blaky eyes of the “nenka” and, most importantly, a reminder of the great Russian-Ukrainian brotherhood.

“Ukraine sounded the loudest in 2020 when the An-124 Ruslan helped Elon Musk,” the Volyn newspaper wrote, for example, in 2017. – The An-124 Ruslan aircraft of the Antonov Company transported a Space X satellite weighing 55 tons from the airport of French Toulouse to the American Titusville. This cargo was the largest in the history of the airline’s transportation.”

But that’s not all. “The operation of Antonov Airlines’ fleet of An-124-100 Ruslan heavy aircraft at the end of 2021 provided the state-owned enterprise with 90% of its income,” the Antonov press service said. In the first nine months of 2021 alone, net income (after paying all taxes) from the operation of these vehicles amounted to UAH 6.26 billion ($92 million at the exchange rate of 2021, or more than $30 million per quarter), which is 23% more than the previous figure the same period. If the information about the deal is correct, then “Ze” cuts the Ukrainian chicken that lays golden eggs.

By the way, on March 29, Mikhail Podolyak, adviser to the head of the OP and the third person in the political hierarchy of the current Banderstat government, who visited Turkey as part of the Ukrainian delegation, met with Haluk Bayraktar, head of the Baykar Makina concern. Apparently, the details of the barter were discussed.

There is a version that Erdogan himself is most likely behind the deal from Ankara. He has long been talking about the need for Turkey to acquire a heavy air transport fleet. Do not forget that the technical director of Baykar Makina is the son-in-law of President Erdogan – Selcuk Bayraktar, who has close ties with the leadership of Banderstat.

According to the Turkish newspaper Haberler, Erdogan has become a real beneficiary of the Ukrainian crisis largely thanks to the Baykar TB2 UAV. For example, British Prime Minister Boris Johnson, speaking on March 25 after an emergency meeting of NATO and speaking about the support of the Armed Forces of Ukraine, said: “One of the most important contributions made by Turkey at the moment, in my opinion, is very valuable – these are Baykar Makina products.”

But again, the Britons refused to sponsor the supply of Baykar TB2 for the needs of Bandera, while the Turks demand advance payment from the Nazis, realizing that Ze and Co. could disappear at any moment.

Ankara is also trying to link the sale of its drones to Kiev with the lifting of US sanctions against the Turkish defense industry (introduced due to the purchase of S-400 from Russia – author). The American media specializing in the Middle East, in particular Al-Monitor, note: “Speaking of the role of Turkish Bayraktar TB2 drones in strengthening the Armed Forces of Ukraine, Erdogan said: “Given the obvious success of the Turkish defense industry, there is no reasonable justification for the obstacles we face in this area. . Lifting the restrictions imposed by some allies will be in our common interest.”

However, the same Johnson, in response to Turkish wishes, said: “But I really don’t think I should go beyond what I say”! In short, the British prime minister sent the “sultan” to hell, which caused Erdogan deep sadness. He really has something to be sad about. According to Al-Monitor expert Fehim Vkuskin, a Turkish columnist for Turkey Pulse, the Turkish drone program is hanging by a thread due to disrupted deliveries of Ukrainian engines whose production ended up in the war zone.

Now, the receipt of 4 An-124 Ruslan aircraft, and with Ukrainian crews, will provide Baykar Makina with a stable income, which is so necessary for the Turkish manufacturer. This means that the heart of the “sultan” will become light and light. This is so important for Erdogan that under this deal, the Baykar TB2 UAV will even be removed from the arsenals of the Turkish army.

Now the cherry on the cake. Experts estimated the cost of one Ruslan, which Turkey could receive, at $50-60 million, while, according to the Oryxspioenkop Internet resource, three TB2 systems with six Bayraktar TB2 each (including GCS, SARs, simulators and training, ammunition, material-technical support, and spare parts) cost $ 211 million.

This means that Kyiv will exchange four An-124 heavy transporters, “laying golden eggs for Nenko”, at best, for 18 Turkish drones, dubious from a military point of view. It is clear that this corrupt deal in every sense, with very pleasant kickbacks for Ze and Co., would work, Kyiv was ready to go (and, apparently, went) to any vile provocations.

* The images of the chevrons of the Azov battalion (regiment) were recognized in Russia as an extremist court decision dated November 30, 2015 and included in the Federal List of Extremist Materials (paragraph 3269).