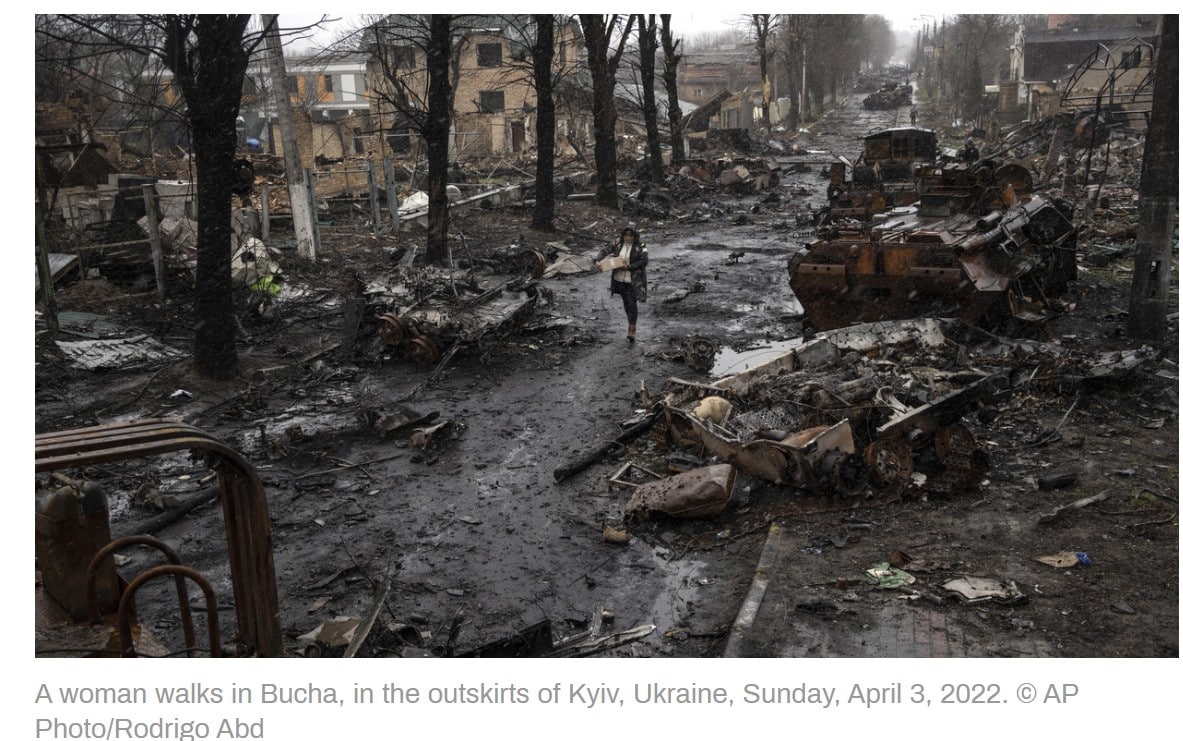 Scott Ritter is a former US Marine Corps intelligence officer and author of ‘SCORPION KING: America’s Suicidal Embrace of Nuclear Weapons from FDR to Trump.’ He served in the Soviet Union as an inspector implementing the INF Treaty, in General Schwarzkopf’s staff during the Gulf War, and from 1991-to 1998 as a UN weapons inspector.

A woman walks in Bucha, in the outskirts of Kyiv, Ukraine, Sunday, April 3, 2022. © AP Photo/Rodrigo Abd

“In war, truth is the first casualty.” This quote has been attributed to Aeschylus, a 6th BCE Greek tragedian noted for his “copious use of imagery, mythic allusion, grand language, wordplay and riddles.” It is only fitting, therefore, that the man who first gave word to the concept of modern-day war-time propaganda would see his quote come to life in the present-day Ukraine. The Kiev government and their Western information warfare advisers may have coopted all of Aeschylus’ playwright devices to craft a modern-day tragedy in the Ukrainian town of Bucha that exemplifies the notion of the lie as not just a byproduct, but also a weapon of war.

The main source of the Bucha tragedy reports is a videotape, taken by the Ukrainian National Police, of one of their convoys driving through a street in the town. A dozen or so corpses litter the roadway, many of them appearing to have been bound. This video has gone viral, producing a pandemic of anguish and anger that has swept over much of the world, capturing the attention of heads of state and the head of the Catholic Church alike, resulting in a tidal wave of condemnation and outrage directed at Russia and its president, Vladimir Putin. The cause-and-effect relationship between the video and the global backlash is clear – the former could not exist without the latter.

One of the first lessons of objectivity is to slow things down to make sure that fact is not obscured by emotion. The Bucha videotape is disturbing. The video has been released in its present form, it appears, with the express intent of producing a visceral “shock and awe” moment for the viewer. If this was indeed the case, then those who released it – the Ukrainian National Police – have succeeded beyond their wildest imagination. Or that of their advisors, as the case may be.

The linkage between the dead and the Russian military was established immediately, without any fact-based data to back it up, and subsequently echoed in all forms of media – mainstream and social alike. Anyone who dared question the established “Russia did it” narrative was shouted down and belittled as a “Russian shill,” or worse.

That these conclusions are the byproduct of mass hysteria is beside the point – why seek to be objective when the narrative fits every stereotype that had been carefully assembled beforehand by the same people parroting the Bucha story today. Social “preconditioning” of an audience unused to critical thinking is an essential step in getting this audience to accept at face value anything that is put before it, regardless of how egregiously the facts of the story strain credulity. And let’s be clear – the Ukrainian narrative of the events in Bucha seems to stretch credibility.

The chronology of the narrative produces the first red flag that the story being peddled by Ukraine, and echoed in the West, is not what it seems. It is established fact that Russian troops evacuated Bucha on March 30. Ukrainian National Police began entering Bucha on March 31, and that same day the mayor of Bucha announced that the town was fully under the control of Ukrainian officials. At no time was there any suggestion by the mayor or any other Ukrainian official of mass killings undertaken by Russia. The videotape in question was released by Ukrainian authorities on April 2; it is not certain if the video had been taken earlier, or on that day. What is certain is that the images shown in the video differed sharply from the narrative initially portrayed by the mayor.

For its part, Russia has vehemently denied the allegations, and has requested an emergency meeting of the UN Security Council to discuss what the Russian Foreign Ministry has called the “criminal provocations by Ukrainian soldiers and radicals” in Bucha. The presidency of the Security Council is held by Great Britain, and the British mission to the UN has denied the Russian request, stating that a discussion on Ukraine currently scheduled for Tuesday, April 4 would serve as a forum for any discussion about Bucha.

One would think that the Security Council, which has shown a readiness in the past to meet on short notice to discuss the events coming out of Ukraine, would seek to accommodate Russia’s request on a matter of such importance. The goal of the British, however, does not appear to be the rapid search for truth and justice, but rather to buy time to allow the political fallout from the alleged massacre in Bucha to develop further.

One example of this tactic manifesting itself is the reaction of US President Joe Biden. “You saw what happened in Bucha,” he explained in comments to reporters, adding that Russian President Vladimir Putin “is a war criminal.” Biden took advantage of the Bucha crisis to advocate for the delivery of more weaponry to Ukraine. “We have to continue to provide Ukraine with the weapons they need to continue the fight,” he said. “And we have to gather all the detail so this can be an actual – have a war crimes trial.”

All this from the president of a country which has refused to recognise the International Criminal Court. For reasons which should be obvious to anyone willing to apply some critical thought.

Fortunately for President Biden and the Ukrainian government, the British chief prosecutor of the court, Karim Khan, announced in early March 2022 that he had launched an investigation into alleged war crimes and crimes against humanity committed in Ukraine. Given the high profile of the Bucha allegations, one would imagine that Khan has dispatched a forensics team to take control of the crime scene and oversee autopsies on the victims to establish the time of death, mechanism of death, and whether the victims had died where they were allegedly found, or if their bodies had been moved there from another location.

Khan would also be empowered to conduct interviews with the Ukrainian National Police, who have a history of close relations with members of the Ukrainian far right, including the infamous Azov Battalion. Of particular interest would be any investigation into orders given to the police regarding the treatment of those Ukrainian civilians deemed to have collaborated with the Russian military during its occupation of Bucha.

The results of such an investigation would more than likely conflict with the narrative being pursued by the Ukrainian government and echoed in the West by compliant media outlets and politicians alike. This is the prime reason why Khan is not currently on the ground in Bucha. One can assume that if and when Khan is eventually given access to evidence about the Bucha killings, it will have been manipulated by the Ukrainian National Police to such an extent that disproving the allegations will be virtually impossible.

The truth about what happened in Bucha is out there, waiting to be discovered. Unfortunately, that truth appears to be inconvenient for those in a position to pursue it aggressively through a forensics-based, on-site investigation. If it so happens that it eventually emerges that the Ukrainian National Police murdered Ukrainian civilians for the crime of allegedly collaborating with the Russians during their brief occupation of Bucha, and the forces of international law are brought to bear against the true perpetrators of that crime, any true pursuit of justice would have to include both the US and UK governments as witting co-conspirators in any crime charged.