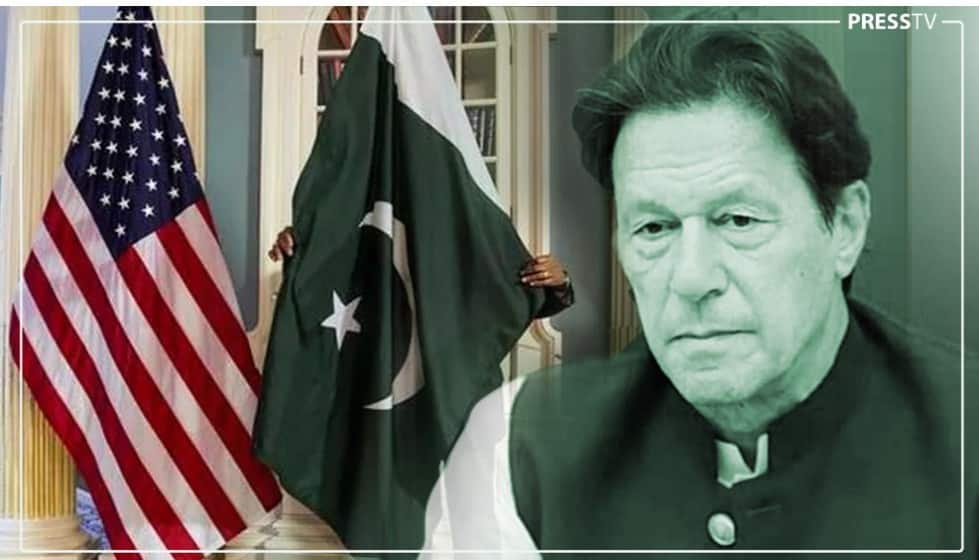 When the leader of a third-world country openly and defiantly proclaims his nation’s sovereignty and refuses to buckle under the pressure of neo-imperial powers, the radical sadists and war hawks in Washington resort to their hideous ‘regime change’ playbook.

We witnessed it again this week – in Pakistan – but the result was different. Prime Minister Imran Khan, to employ cricket slang, bowled a vicious reverse swing to thwart what he dubbed a “foreign-backed plot.”

More than three years after taking the reins as the Muslim-majority country’s prime minister, Khan faced the biggest test of his political career on Sunday. The opposition, with tacit backing of the country’s powerful military, moved a no-trust motion against the cricketer-turned-politician, but the vote was dismissed by the parliament.

Deputy speaker of Pakistan’s national assembly, Qasim Suri, asserted that no foreign power will be allowed to “topple an elected government through a conspiracy,” calling the vote against the sitting premier “unconstitutional” under Article 5 of the country’s constitution.

Suri’s loud announcement was met with vociferous slogans and chaos inside the lower house of Pakistan’s parliament. There were anti-American slogans as well.

In his televised address on the state-run television, Khan congratulated the people of Pakistan and reiterated that the move to overthrow him was a “foreign conspiracy.”

He also requested President Arif Alvi to dissolve the parliament, which was done immediately under Article 58(1) of the constitution and called on the nation to gear up for a fresh election. Information Minister Fawad Chaudhry said Khan will continue in his chair until the fresh vote is held, but it remains unclear how things will proceed.

Khan won’t be completing his full term, something no prime minister has done in the South Asian country’s history, but he clearly outsmarted the regime change plotters in Washington.

Before the high-drama vote on Sunday, the embattled premier had rejected calls to step down, vowing to fight till the end. He didn’t blame his domestic rivals for plotting his downfall but claimed a foreign plot behind the move. It was a revelation hard to dismiss, regardless of political affiliations.

In an emotional televised speech on Thursday, the flamboyant skipper who heroically led Pakistan to its first and only Cricket World Cup triumph in 1992, blasted Washington for ganging up with his political opponents in a bid to remove him from the office.

He referred to a letter received by Pakistan’s outgoing ambassador to Washington, Asad Majeed Khan, from a senior US State Department official, which was sent to Islamabad on March 7, a day before Pakistan’s opposition parties made the first move to table a no-trust motion against Khan in the national assembly.

“To an independent country, a message like this that apparently is against the prime minister is actually against our nation,” Khan affirmed in his speech on Thursday, calling the letter evidence of an “international conspiracy” to topple his government.

According to senior Pakistani journalist, Nasim Zahra, the threatening letter warned that the US-Pakistan relations “will not improve” with Khan in power and that Pakistan “will be forgiven” once he is ousted. That pointed to brazen foreign meddling in Pakistan’s internal affairs, as Khan rightly claimed.

It didn’t come out of the blue. Before his Thursday speech that made headlines, Khan had also pointed to it at a massive public rally in Islamabad last week. He called the no-confidence vote against him at home a “foreign conspiracy,” linking it to his recent visit to Moscow at the height of the Ukraine crisis.

The timing of Khan’s visit to Russia, hours before the Kremlin launched a military operation in Ukraine, and his refusal to join the Western bloc in condemning the operation at the UN General Assembly (UNGA) session turned him into an overnight villain and outlaw.

Khan became the first Pakistani prime minister to visit Moscow in 23 years, showing growing proximity in their bilateral relations. However, what grabbed headlines was the timing of the visit and its immediate aftermath.

Quite expectedly, it raised eyebrows in the US and Europe, with Washington even telling Islamabad that it was “watching” Khan’s visit. The message carried a subtle warning – don’t get too close to Russians. Khan, however, chose defiance instead of tame submission.

He went a step further when he lashed out at the European Union (EU) for asking him to vote against Moscow at the UN General Assembly, saying they shouldn’t treat Pakistan as their “slave.”

“What do you think of us, are we your slaves that whatever you say, we will do,” the firebrand premier said at a public rally last month, asking EU diplomats whether they also wrote such letters to India, the estranged neighbor and a strategic rival.

The warmth between Pakistan and regional powers like Russia and China is a hard pill to swallow for the West, including the US. Khan, since taking office in 2018, has shown serious intent in forging closer ties with both countries, which has pushed his country away from the US. Interestingly, Joe Biden is yet to make a call to Khan since taking office in early 2021.

It’s true that the US and EU are still Pakistan’s biggest trade partners, and that’s the card they have played for years to keep Islamabad subservient to them. Khan, unlike his predecessors, sought to assert his country’s independence in foreign policy and trade, embracing new all-weather allies like Russia and China.

In a February interview, Khan hit out at the US for using Pakistan for its own strategic goals and then abandoning it and slapping sanctions, citing an example of Pakistan-US relations in the 1980s when the South Union forces were deployed to Afghanistan. It was Pakistan that Americans banked on that time.

What has also ruffled feathers in the powers corridors of Washington is Khan’s scathing criticism of America’s military adventures in neighboring Afghanistan. After the botched exit last August, Khan censured Washington for the “mess” it was leaving behind in the war-ravaged country after 20 years of fighting. He also refused to allow Pakistan to be used for “over-the-horizon” US missions against targets in Afghanistan.

So, it’s pretty evident that the aborted move to overthrow him was remotely controlled – in a bid to install a US-friendly government in Islamabad. That his political opponents joined hands with the ‘regime change’ hawks in Washington only smacked of political opportunism and deceit.

Khan has been accused of economic mismanagement by his key political opponents, including the likes of Shahbaz Sharif and Bilawal Bhutto Zardari. While it’s true that Pakistan grapples with serious economic woes, it would be grossly unfair to lay the blame squarely on Khan and his party, Pakistan Tehreek e Insaf. He inherited the mess from his predecessors, who have now conveniently taken up cudgels against him.

To his credit, Khan managed to steer his country out of the COVID-19 crisis, combated institutionalized corruption, forged close alliances with Beijing and Moscow, played a key role in the Afghan peace process, fought the wave of Islamophobia, and amassed the country’s foreign reserves to over $18 billion.

As Khan declared a few days ago, in a remarkably defiant tone, he will “come back with more power.” So it would be too naive and too early to write his political obituary.

Why the US attempted to topple Pakistan’s government

The United States attempted to topple the government of Pakistani Prime Minister Imran Khan because “he would not allow US military bases there and because he will not toe the line on Russia,” according to American author and political analyst Daniel Kovalik.

Kovalik, an academic at the University of Pittsburgh, made the remarks in an interview with Press TV on Monday, a day after members of Pakistan’s parliament chanted “Death to America” as they rejected a no-confidence vote, which sought to oust Prime Minister Khan, saying “foreign powers” were interfering in the country’s democratic process.

The National Assembly deputy speaker dismissed the no-trust move against the prime minister, terming it as “contradictory” to Article 5 of Pakistan’s Constitution.

Suri said that the motion was presented on March 8 and should be conducted according to the law and the Constitution, stressing, “No foreign power shall be allowed to topple an elected government through a conspiracy.”

Khan on Saturday accused the United States of being behind the parliamentary no-confidence motion, calling it an attempt at regime change backed by Washington.

Addressing a large rally in the capital Islamabad last week, Khan said the “foreign power” sent millions of dollars to opposition parties to launch a no-confidence vote against him in the parliament.

“While US officials shed crocodile tears about Russia’s lack of respect for the sovereignty of Ukraine, the US wasted no time in violating Pakistan’s sovereignty by attempting to overthrow the government of Prime Minister Imran Khan because he would not allow US military bases there and because he will not toe the line on Russia,” Kovalik said.

“While the coup failed, this is but one more illustration of the fact that no country in the world is more dismissive of other nations’ sovereignty than the United States,” he added.

“Indeed, the government in Ukraine itself is the product of a US-backed coup in 2014 — a fact which is not lost on Russia.  For that matter, Putin himself, who owes his political career to his relationship with Boris Yeltsin, may not himself be in power today had the US not intervened to help Yeltsin steal the 1996 elections,” he stated.

“The US has intervened in no less than 80 elections abroad since WWII, and that doesn’t even count the forceful coups it has brought about. Hopefully, the failed coup attempt in Pakistan demonstrates that the United States’ power to overthrow foreign governments is weakening. But only time will tell,” the analyst concluded.