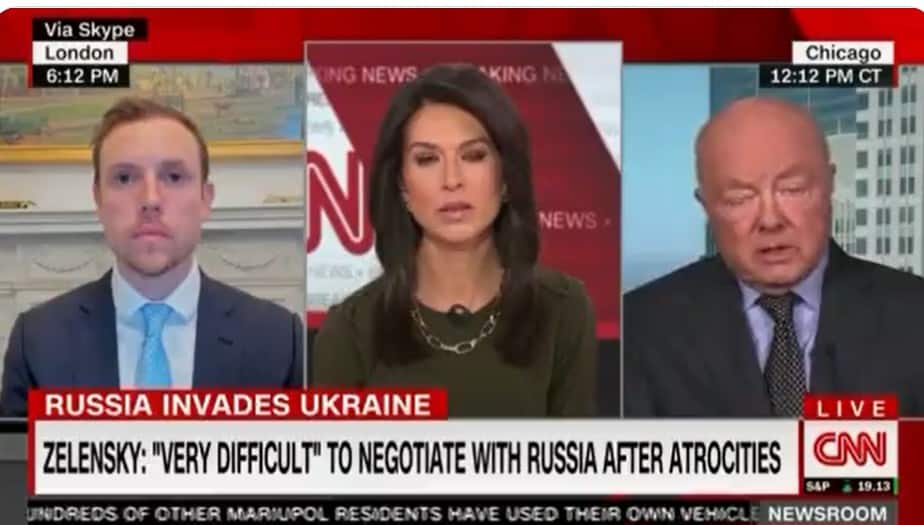 VT: The US is removing all evidence this CNN interview ever happened, scouring it from the web using Israeli software and assets that control Google, Facebook, Twitter, and most tech companies

There is no evidence that Moscow is to blame for the events in Bucha.This was stated on CNN by former US Ambassador to the USSR Jack Matlock.
"The fact is that Ukrainians need to make a deal with Russia so that it can keep Crimea, where the majority of the population is Russian👇 pic.twitter.com/XX7nU7IHUa

The former US ambassador to the USSR called for refraining from premature assessments of events in the settlements that the Russian military left.

Veteran US diplomacy Jack Matlock aired on CNN. Matlock began by correcting the presenter, who called him a former ambassador to Russia.

The diplomat said that he was the ambassador to the USSR, of which Ukraine was a part. And then completely sedition: Matlock: In my opinion, the main goal now is to end the conflict in Ukraine, and this can only be achieved through diplomacy

Host: I have to interrupt you.

Matlock: Firstly, we don’t know exactly what really happened in Bucha, and secondly, there is no evidence that Moscow is to blame. The fact is that Ukrainians need to make a deal with Russia so that it can keep Crimea, where the majority of the population is Russian and where their naval base is located. Because the creation of Russia – a nuclear power equivalent to the United States, a pariah country, is definitely not in our interests.

This is the only version left:

Veteran American politician Jack Matlock spoke on the air of CNN, in which he spoke about the tasks that Russia is pursuing in Ukraine. He stressed that at one time Ukraine was part of the USSR, where he acted as ambassador, blogger Valentin Bogdanov reports Madlock’s words in his Telegram channel.

Despite attempts by the presenter to focus on the events in Bucha, where media traps are trying to accuse Russia of attempting to genocide the Ukrainian population, Matlock continues to assert the need for a diplomatic settlement of the issue.

“Firstly, we don’t know exactly what really happened in Bucha, and secondly, there is no evidence that Moscow is to blame. The fact is that Ukrainians need to make a deal with Russia so that she can keep Crimea, where the majority of the population is Russian and where their naval base is located,” the former ambassador explained.

He stressed that the creation of a rogue state from Russia, which has nuclear weapons, is clearly not in the interests of the United States.

It is noted that Matlock’s speech subsequently did not appear on the CNN website, and the prospects for his new appearance on the channel’s air in the near future are in serious doubt.

Ambassador Jack Matlock has said it is not wise to make a nuclear-armed equivalent of the US into a pariah state
Moral outrage over images of apparent war atrocities in Bucha, Ukraine is understandable, but the calls to turn Russia into a pariah state are ill-advised, a former US ambassador to the Soviet Union warned on Monday, during an appearance on CNN.
Jack Matlock held various positions during the height of the Cold War and was Washington’s representative to the USSR in the final years of the communist powerhouse. The veteran diplomat warned CNN audiences that the drive to further antagonize Russia, which prevails in the West, is ill-advised, especially since it’s driven by emotions rather than reason.

“I share many of these emotions, but to the idea that we can make a major nuclear-weapon state a pariah, that by our actions we actually are destroying those elements in that society that could bring a positive change in the future. I think that is not wise,” he said.

Matlock was referring to the moral outrage that has been dominating the West’s coverage of the Ukrainian crisis since Kiev accused Russian troops of war crimes. The allegations focus on Bucha, a small town northwest of Kiev from which Russian troops withdrew last week. Days after the withdrawal, images of apparent atrocities targeting its civilian population started pouring in from Bucha.

Ukrainian officials claimed this were evidence that Moscow was pursuing genocide of the Ukrainian people. Russia has denied any responsibility for what appeared in the images and said that Kiev was manipulating public opinion with staged scenes of brutality.

The CNN segment, in which Matlock was one of the experts providing their opinion, put the blame for the civilian deaths squarely on Russia. “Of course, there is no one else who could have committed these atrocities,” an EU spokesperson quoted by the news network said. Host Ana Cabrera said images from Bucha were particularly horrific because the alleged crimes were committed not by “some rogue actor like the Taliban or a terror group like ISIS or al Qaeda,” but by a UN nation.

Matlock said that feeling outrage over what he called “horrors of war” was a normal human reaction, but suggested that the only way to end them was to negotiate a path towards de-escalation.

“To think that the world would benefit from making Russia, a nuclear power equivalent to the United States, a pariah, I think, does not really represent our interests in the future. I fear a world of that sort,” he said.

Opposing his view was Brian Klaas, associate professor of global politics at the University College of London, who argued that Russia has made a pariah of itself by committing war crimes in Ukraine. He believes that the killings of civilians in Bucha were “orchestrated” by senior Russian leadership.

Matlock said he was skeptical of the idea. “We do not know for sure exactly what happened with these apparent atrocities. And, certainly, we don’t know that they were ordered from Moscow,” he also pointed out.

The veteran diplomat reiterated his long-held position, that NATO’s expansion in Europe and the gradual rising of tensions between Western powers and Moscow, which escalated into a shooting war in Ukraine this year, were an avoidable mistake of US foreign policy.

Klaas dismissed the notion, stating that “the characterization that this is somehow our fault [was] wildly wrong.”

Moscow attacked its neighbor in late February, following Ukraine’s failure to implement the terms of the Minsk agreements of 2014, and Russia’s eventual recognition of the Donbass republics in Donetsk and Lugansk. The German- and French-brokered protocols had been designed to regularize the status of those regions within the Ukrainian state.

Russia is demanding that Ukraine officially declare itself a neutral country that will never join the US-led NATO military bloc. Kiev insists the Russian offensive was completely unprovoked and has denied claims it had planning to retake the two secessionist regions by force.