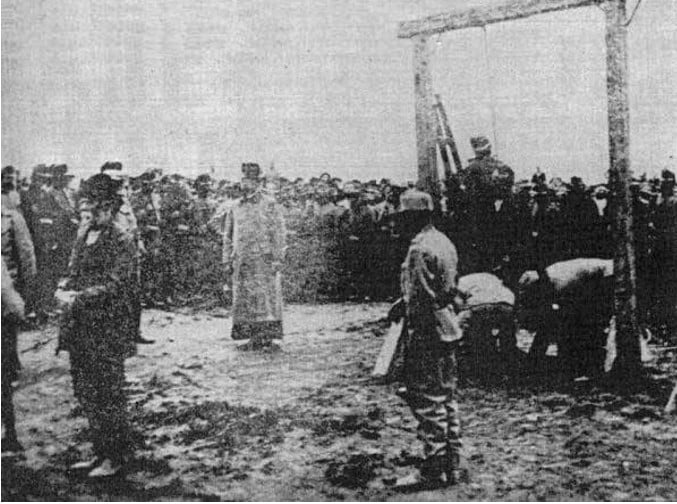 topwar.ru – Talerhof in 1917. The place where the camp executions were carried out

How was Russian Galicia destroyed? Russians were seized, driven through stages and prisons, starved and thirsty, beaten and tortured. Finally, executions – gallows and executions, without counting and without end. Only because you are Russian and Orthodox, you do not want to give up the proud name “Rus”.

This is how the Ukrainization of Russian lands was carried out during the First World War. The Nazis also acted on the lands of the occupied Ukrainian SSR. The same experience was used by the occupational, pro-Western regime in Kyiv, when, with the support of the collective West, it created the current “Ukraine-anti-Russia”.

Ukrainian is not a nationality, but party membership

Austria, which received Russian Galicia (Galician Rus) after the divisions of the Commonwealth, began to fear that Rusyns-Russians would like to return under the rule of the Russian tsar. This became especially noticeable when the Russian Empire intensified its policy in the Balkans and began to smash the decrepit Ottoman state. The Austrian authorities became nervous. The Habsburg Empire included vast Slavic regions, so Petersburg, if it had such a desire, could easily destabilize the Austrian state by drawing the Balkans to itself.

First, the Austrian authorities relied on the Uniates: measures were taken to raise the cultural level and authority of the Uniate clergy. Rusyns were given government scholarships for education at the Uniate Theological Seminary in Vienna, and Uniate bishops were given equal rights with Catholic ones.

The surge of Russophile sentiments in Galicia in the wake of the revolution of 1848 and the victories of the Russian army in the Balkans during the Russian-Turkish war of 1877– 1878. led to the fact that the Austrian authorities began to pursue a policy of prohibitions and discrimination against the indigenous Western Russian population. With the simultaneous support and funding of Ukrainophiles, Ukrainian elements. Austrian Germans, Poles and the Ukrainian intelligentsia (whose native language was Russian, like the “father of the Ukrainian nation” – M. Grushevsky, because “Ukrainian” then did not mean belonging to a people-nation, but to a political party) launched a real information offensive against the Russians in Galicia.

Information war sooner or later leads to real bloodshed. In 1912, a war broke out in the Balkans between the Slavic states and Turkey. This war further aggravated relations between the Russian and Austro-Hungarian empires. Europe smelled of a big war. Ukrainophiles demanded from the Austrian authorities reprisals against the Galician Rusyns, “Muscovites”.

The beginning of the repression

The Austrian authorities were afraid that as soon as the war with Russia began, an uprising of Rusyns would break out in the rear. Their fears were fueled by representatives of the Ukrainian intelligentsia and the Poles. Representatives of the “Ukrainian people” (who simply did not exist then!) demanded to stop the Russian movement in Galicia by force.

In 1911, the governor of Galicia, M. Bobzhinsky, declared in the Galician Sejm:

“I fight against Russophilism because it is dangerous for the state, but I also fight against it as a Pole loyal to the Polish historical traditions”.

The Ukrainian press demanded repressions against the Russians. For example, in July 1912, the Dilo newspaper stated that,

“When Eastern Galicia becomes a “Ukrainian”, conscious and powerful, then the dan-

ger on the eastern border will completely disappear for Austria.”

Therefore, Vienna needs to support “Ukrainianism” in Galicia, since the Carpatho-Russian population is dangerous to the Austro-Hungarian Empire.

“The Muscovites are carrying out treacherous work, inciting the dark population to betray Austria at a decisive moment and to accept the Russian enemy with bread and salt in their hands. Anyone who only teaches the people to do this should be immediately arrested on the spot and handed over to the gendarmes … “

The Austrian authorities immediately responded to the “requests of the working people.” Hundreds of prominent Rusyns in Galicia and Bukovina were arrested. They were mainly representatives of the Russian intelligentsia and the clergy.

Metropolitan Andrey Shcheptytsky (in the world Roman Maria Alexander Shcheptytsky) played an active role in the organization and informational cover of repressions and the subsequent genocide of Russians. He was born in 1865 into a wealthy noble family, the Counts of Scheptitsky descended from Western Russian boyars, who became Polonized and Catholicized at the end of the XNUMXth – beginning of the XNUMXth centuries.

Roman began an officer’s career in the Austro-Hungarian army but retired for health reasons. He graduated from the Faculty of Law of the University of Wroclaw, in 1888 he received a doctorate in law. The Count made a spiritual career. In 1888 he took monastic vows with the name Andrei, joining the Order of St. Basil. He studied at the Jesuit Seminary in Krakow, earning a doctorate in theology. From 1896 he was hegumen of the monastery of St. Onuphrius in Lvov, in 1899 he became the bishop of Stanislavovsky, from 1900 he was the Metropolitan of Galicia, the archbishop of Lvov, and the bishop of Kamyanets-Podilsky.

Shcheptytsky was actively involved in the Ukrainian issue. In 1908, he secretly visited Moscow and St. Petersburg with forged documents. In July 1914, the Austro-Hungarian authorities instructed the metropolitan to draw up a political program for the army in the event of the occupation of Ukraine. Count Scheptitsky prepared a grandiose project that took into account the interests of the Habsburgs, the Vatican, and the Metropolitan himself.

He proposed to contribute to the anti-Russian uprising in Ukraine, to separate these regions from Russia, in every possible way to promote the development of the “Ukrainian people”, its separation from the Russian people. Form autonomous Ukrainian formations led by a hetman on the traditions of the Zaporizhzhya Cossacks. Spread the military organization throughout the country – atamans, captains, colonels, centurions, etc. Propagate the injustice of Russian legislation, and claim that “Ukrainians” were constantly oppressed. Create new legislation on the basis of the Austrian one.

The Church in Ukraine should be separated as completely as possible from the Russian one. To make the Ukrainian Church independent from the Russian one, to forbid praying for the Tsar, now it will be necessary to pray for the Austrian emperor, to remove all Russian saints from the calendar, etc. With the outbreak of the First World War, Shcheptytsky called on the “Ukrainians” to be faithful to the Austrian emperor, who allegedly carried their freedom. 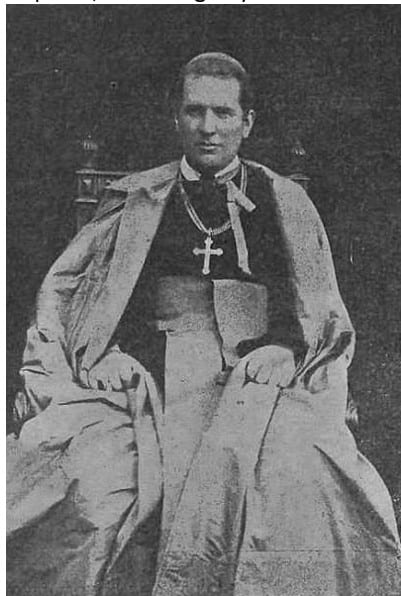 Even before the start of the World War, the Austrian authorities, at the suggestion of the Ukrainians, “preventively” began repressions against representatives of the Russian movement in Galicia. The spy mania, the “witch hunt” began. Spies, traitors declared people who had a civil position, influence in society. The spy trials against the Russophiles were accompanied by great hype in the German and Ukrainian-language press.

Simultaneously with the beginning of mobilization in 1914, arrests of Russophiles, opponents of the “Ukrainian idea” and simply suspicious people began throughout Galicia, Bukovina, and Carpathian Rus. For example, only in one Bobretsk district in July-August 1914, 195 people were arrested. Often the arrests were accompanied by beatings and lynching. A person could be killed simply for curiosity (observation of moving troops). There were so many arrested that already in 1914 the Austrian authorities were the first in Europe to open two concentration camps – Talerhof and Terezin.

During the war, the Austrian authorities staged a real genocide of the indigenous population of the Western Russian regions – Galicia and Carpathian Rus. The Austro-Hungarian counterintelligence seized people indiscriminately, without trial or investigation. Just because he was Russian, bore a Russian name, read Russian newspapers and books, and had Russian icons. Large-scale purges of Rusyns-Russians were carried out. Hundreds of thousands of people became their victims – they were shot, hanged, tortured in camps and prisons, starved to death, and died of disease and cold. Others became refugees, leaving their homes. First of all, they exterminated the most active part of the Russian people – the intelligentsia, the priests. Thus, they intimidated the rest, which made it possible to “reformat” them into “Ukrainians”. So before Russian Galicia lost its Russianness.

Talerhof and Terezin became the forerunners of Hitler’s Auschwitz and Dachau. It was there that the technique of massacre of civilians was tested. A special role in this process was played by professional “Ukrainians”, who denounced everyone they considered dangerous or simply did not like.

“The Talerhof tragedy,” writes historian N. Pashaeva, “was the tragedy of the entire Russian movement and the entire people of Galicia. The scale of this tragedy of many thousands of families would have been incomparably more modest if it were not for the treacherous role of the Ukrainophiles, who were the fifth column of the Galician national movement, assistants to the Austrian administration and the military.” The humanism of the royal authorities

For comparison, in the Russian Empire – the “prison of peoples”, according to liberals and various nationalists, such horror was not even close. Although it would be logical to clean up the real “fifth column” in the face of Russian and Ukrainian Western Freemasons (future February revolutionaries). Ukrainophiles were treated very liberally. It got to the point that when the war began in Kyiv, the Ukrainians staged a procession in honor of Austria-Hungary and its flags. No one-shot them or even sent them to hard labor.

Grushevsky himself (How the anti-Russian project “Ukraine-Rus” was created) sent a link to Simbirsk but was soon transferred to Kazan, and from there to Moscow.

Metropolitan Shcheptytsky, who remained in Lvov, which was liberated by Russian troops in September 1914, quickly “repainted” and wrote a letter of greeting to Russian Emperor Nicholas II. The Russian sovereign was not a fool and wrote the letter “Aspid!” He did not yet know about the Metropolitan’s plan for the reorganization of Ukraine. The count was in exile in Kyiv, Novgorod, Kursk, and then in an honorary conclusion in the SpasoEvfimievsky monastery in Suzdal. He will be released in the spring of 1917 on the personal instructions of his “brother” in Freemasonry, Alexander Kerensky.

After the end of the First World War, Shcheptytsky kept in touch with the Ukrainian nationalists, and in 1941 he hailed “the victorious German army, which liberated us from the enemy.” When the Nazis captured Kyiv, Shcheptytsky sent a congratulatory letter to Hitler, in which he hailed the Fuhrer as “the invincible commander of the incomparable and glorious German army.”

The Metropolitan supported the proclamation of the “Ukrainian state” by Bandera, the cooperation of the Ukrainian Nazis and the Uniate Church with German intelligence, which trained personnel for a sabotage war and terror. So the infection, which was born with the support of Vienna and the Vatican, continued its life under the wing of the Third Reich. 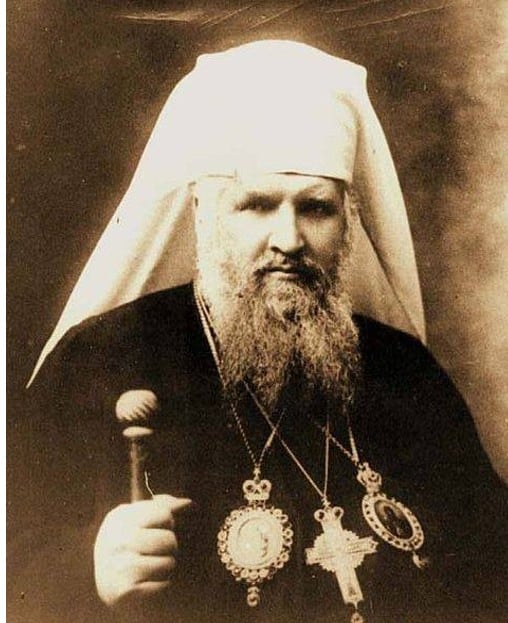