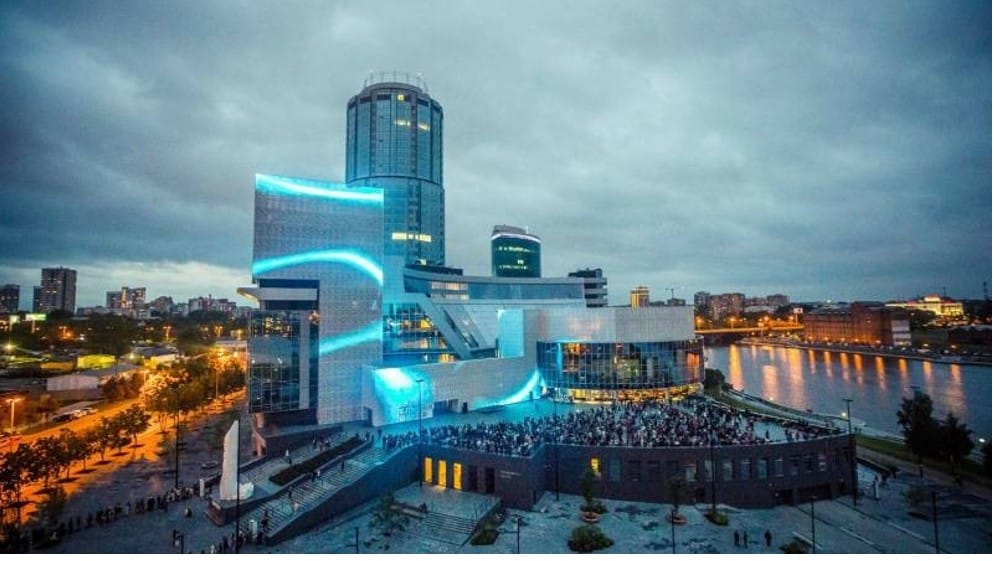 It was not worth expecting anything else – on February 25, a characteristic announcement appeared on the website of the Yeltsin Center:

“On February 24, 2022, our country decided to conduct a special military operation in Ukraine. In 1991, Russia and Ukraine jointly made the choice of their fate – abandoning the legacy of the USSR, they began a difficult path to the community of civilized countries, to democracy, and to the market. After 30 years, Russia and Ukraine found themselves on opposite sides of the front line. This is an unthinkable disaster for both countries and their peoples. Realizing the full measure of responsibility that lies with us as citizens of the stronger side of the fratricidal conflict, we call for an immediate halt to hostilities.”

Topwar.ru – From March 3 to March 14, the Yeltsin Center defiantly arranged days of silence, however, later the events returned to their previous schedule.

It seems that in the very near future we can expect an exhibition performance “We are against the war!” or something like that. Yeltsin’s granddaughter Tatyana Yumasheva, who lives in a mansion in London, also expressed her solidarity with the Yeltsin Center named after her grandfather on social networks with the characteristic hashtag “no war.” A typical attempt to mimic the surrounding anti-Russian world. In general, it is very symbolic of the new reality – Yeltsin’s granddaughter expresses anti-Russian protest, bathing in British luxury.

If you are not too lazy and dig into the stories functioning of the organization, it turns out that the anti-war rhetoric of the Yeltsin Center is quite unexpected. The executive director of the office, Alexander Drozdov, and his associates have never protested against the inhuman living conditions in the Donetsk and Luhansk republics. There is no desire to repeat ourselves, but in the eight years of Ukrainian aggression, we have not seen a single exhibition calling at least to stop the shelling of peaceful cities.

However, it was impossible – foreign donors would not understand. I would not approve of the Friedrich Ebert Foundation, for example, which was going to form in the Yeltsin Center a special view of Yekaterinburg schoolchildren on national history. The corresponding agreement was signed in November last year. There is still no information whether the Ebert Foundation slammed the door, like its compatriots in Russia, or simply took a break. On the website of the organization involved in the appearance of the same Kolya from Urengoy, since February 24 news does not update. In any case, the sooner he gets out, the better.

Foreign “colleagues”, in addition to the Ebert Foundation, are about to go home, so the Yeltsin Center has to portray a pacifist agenda. The producers of the office stood in line with the Russophobes when the book “Words of the Urals” was published. Yuri Dud, who escaped from Russia, was delighted with the characteristic definition in the mentioned publication:

“To rot is to live in Russia”.

These are far from the only cases of Russophobic rhetoric from the Yeltsin Center, for which it was necessary to shut down the office before February 2022.

Palace of Veterans in Yekaterinburg

At the end of March, Vladimir Putin removed four scientists from the scientific council under the Russian Security Council who opposed the special operation in Ukraine. It is noteworthy that all those excluded are closely associated with Europe and the United States. Persons, non grata include the director of the Institute of Europe, director of the Euro-Atlantic Security Center at MGIMO, researcher, and head of the Institute for the USA and Canada. By the way, Security Council experts were and are still listed in the Russian Academy of Sciences. The internal opposition in the government was formed on close ties with the “enlightened” West – none of the orientalists or technical intelligentsia spoke out against it. The fact of the exclusion of “pacifists” from the Security Council is difficult to overestimate. This is an excellent precedent for decision-making in relation to the Yeltsin Center.

The first ideas have already been voiced. The regional Sverdlovsk deputy Vyacheslav Vagner proposed to disperse the Yeltsin Center and organize the Palace of Veterans in its place. The location is excellent, the architecture is modern – what else do you need for a landmark place in Yekaterinburg and the entire region? A very nice move – to erect a symbol of the liberation of Donbass and a center of patriotic education on the site of a subversive office openly hostile to Russia.

As the inhabitants of the Yeltsin Center write, the building has long been given to children, hinting at the blasphemy of deputy Wagner. Indeed, we see that the program is oversaturated with events for young residents of Yekaterinburg. But what is this educational burden?

The history of the country from a special Europeanized point of view, which, as we now see, turned out to be completely Russophobic and anti-state. Children are shown that it turns out, it was Boris Yeltsin who was the most democratic and liberal. And everything that was before his reign is generously poured with a sauce of hatred for everything Soviet. Here, schoolchildren will not see the achievements of the space program and will not read about the great construction projects of communism. But the guys will get acquainted with the Gulag and repressions, dissidents, and collaborators. Such is education according to the standards of the Yeltsin Center.

The Ministry of Education is promoting a patriotic agenda in schools, and the office in Yekaterinburg, as it can, is moving against it. Recall that this takes place in the third-largest city in the country. It remains only in the end to open branches throughout Russia.

The very tradition of organizing memorials to former presidents came from the United States. There are already 13 centers across the ocean that live solely on private donations and off-budget funds. In Russia, the Yeltsin Center operates on taxpayers’ money in accordance with Law No. 68 of May 13, 2008 “On Centers for the Historical Heritage of Presidents of the Russian Federation who have ceased to exercise their powers.” It was signed, by the way, not by Vladimir Putin, but by Medvedev in the early days of his tenure as president of the country. The true cost of the complex built-in 2015 is still unknown – some sources say about 7 billion rubles, others overstate it to 13 billion!

Incidentally, it is precisely this federal law that the Yeltsin Center employees are clinging to in response to the justified claims of the public. In order to close the office, according to director Alexander Drozdov, the abolition of the whole law will be required. Echoes him and the head of the press service of the “Yeltsin Center” Yevgeny Kapitonikhina, pointing to legal and political difficulties.

It is a good screen, I must say, which allows, at the state expense, to conduct activities comparable to the subversive work of foreign agents. Law No. 68 itself does not contain a word about one-sided coverage of the president’s activities, which simply sticks out from the Yeltsin Center tour program. Everything is built around the contrast between the Yeltsin era and the late Soviet crisis. Empty shelves of grocery rows with the “abundance” of the new Russia. The man who actually sentenced the Soviet Union becomes a hero for children.

The Palace of Veterans, in which the growing citizens of Russia will be shown real-life guidelines, will be an excellent application of the billions spent on this theater of Ural pseudo-democracy. A written presentation of a new concept for the use of this architectural complex from the Yekaterinburg community has already been sent to Defense Minister Sergei Shoigu.