Editor’s Note: Oh my, could this be a grifter attorney looking to cash in the Jan 06 debacle by thinking he was in the driver’s seat to submit endless filings to run his bills up on his substantial pool of Jan6 riot defendants? We will have to await further details.

The court sure thought he was not fit to practice, and so did the bar association. As noted below the recently ex-attorney Jonathan Moseley seemed to have his own way of doing things. There were no details given on his 2009 suspension for six months.

So now there will be a big scramble for his cases to be reassigned, with obvious delays for new attorneys picking up the mess. While DC is a busy place for public defender work it is also an expensive place to live.

VT will try to follow this case while it is on appeal … Jim W. Dean 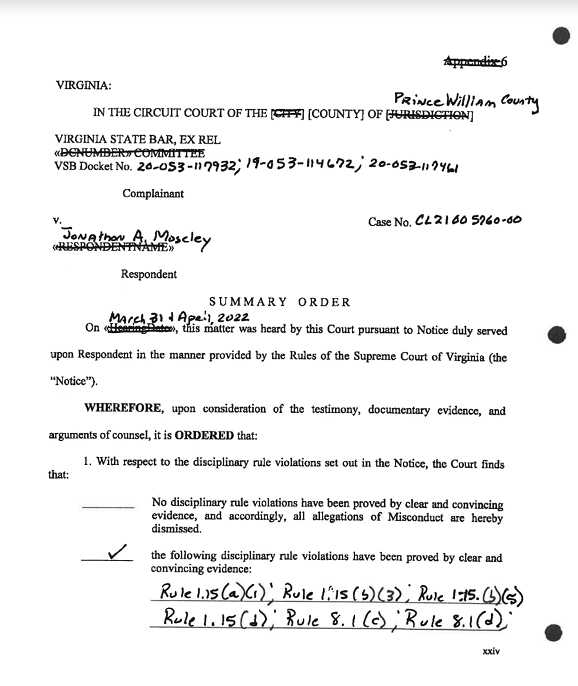 Details of the bar discipline case against Moseley were not immediately available, but a summary posted on the Virginia State Bar website on Tuesday said the court found that he violated “professional rules that govern safekeeping property; meritorious claims and contentions; candor toward the tribunal; fairness to opposing party and counsel; unauthorized practice of law, the multijurisdictional practice of law; bar admission and disciplinary matters … and misconduct.” The decision was effective on April 1.

Moseley plans to fight the disbarment and immediately filed an appeal. Reached by phone on Tuesday night and asked about the bar action, he was tight-lipped.

“Since it’s on appeal and otherwise confidential, I’ll have to wait on that. Thanks,” Moseley said, before hanging up.

…Moseley’s involvement in these cases was marked by his unusual and rambling legal filings, which drew the ire of judges like Mehta, who is presiding over the sprawling Oath Keepers conspiracy cases.

Virginia bar records show he was suspended from legal practice for six months in 2009.