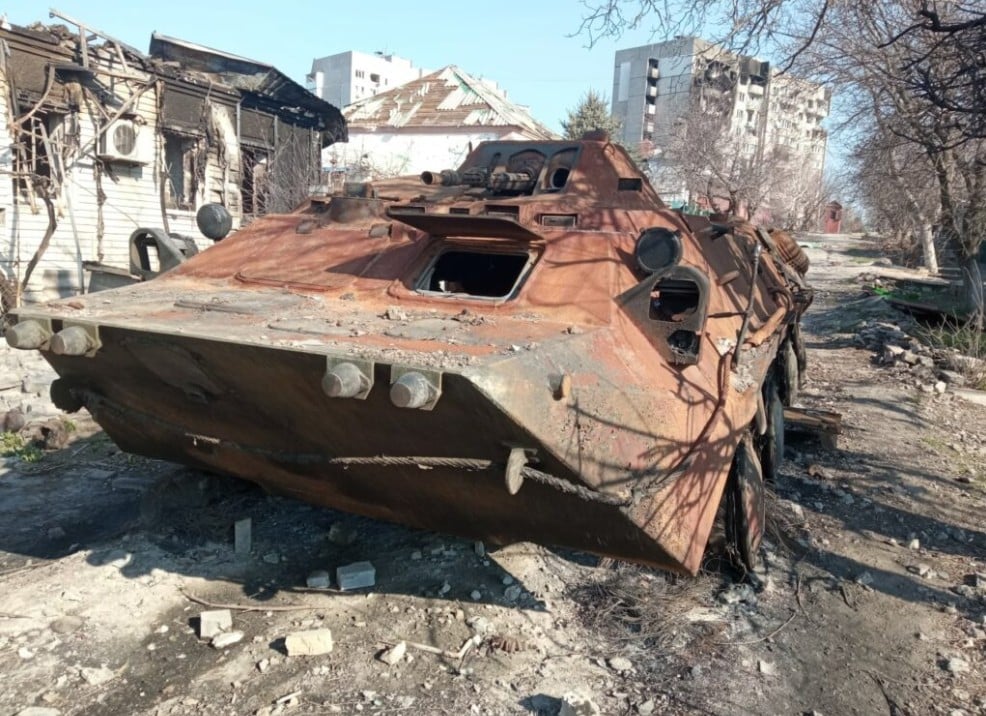 SouthFront – The mop-up operations in the city of Mariupol continue. According to the official representative of the DPR People’s Militia, about three thousand soldiers of the Armed Forces of Ukraine, including nationalist regiments, are currently besieged in Mariupol. The center of the city and almost all administrative buildings have come under the control of Russian and DPR troops.

Civilians in the areas secured by the DPR share their stories and testify about war crimes committed by Ukrainian nationalists. (LINK, LINK, LINK, LINK) Azov fighters and other units of the AFU are divided into three groups, which are blocked at the Azovstal, the Ilyich plant, and the seaport area.

The main battles in the central part of the city are over. The fighting moved to the port of the city and to the territory of the heavily fortified industrial facility of the Azovstal plant in the Left Bank district of the city. DPR assaults continue near the facilities of Azovmash and the Mariupol Metallurgical Plant named after Ilyich located in the Kalmius district of Mariupol.

Russian sources share footage from the drones, showing the assault on the Azovstal facilities. Currently, Russian artillery and the Aerospace Forces are pounding the shelters and firing points of Azov militants.

The port of Mariupol. No civilian vessels are seen in the footage:

Assault units of the DPR People’s Militia and the Armed Forces of Russia, including Chechen soldiers of the regiment named after the Hero of Russia Akhmat-Hadji Kadyrov, have already entered the territory of Azovstal. Aircraft and tanks support the assault.

The operations to mop up the large industrial facilities are extremely difficult. These are large areas with a big number of underground facilities and bunkers. They were also fortified by the AFU. There are headquarters, shelters, and warehouses deployed in the areas. The territories of workshops and passages are mined, including numerous radio-controlled mines. As for the largest Azovstal plant, it is practically impossible to get close to the facility from the Left Bank district of the city. Ukrainian snipers are observing the approaches to the plant. The joint DPR, Russian forces have reportedly entered the facility from the northern direction, but the advance faces fierce resistance from Azov militants.

Meanwhile, DPR and Russian troops are carrying out the mop-up operations in the residential areas in the Left Bank and Central districts of the city. They took control over a military unit which was defended by a combined Ukrainian police unit. On April 6, Russian sources shared photos, taken by a drone, showing the Donbass command ship of the Ukrainian Navy in the Mariupol port, which sustained some serious damage as a result of a direct or an indirect strike.

On December 9, 2021, the ship tried to pass through the Kerch Strait. It was captured in Crimea but later returned to Ukraine. On April 7, the official representative of the PM DPR commented in the issue:

”As we reported earlier, the Azov command, in cooperation with the specialists of the 83rd Center for Information and Psychological Operations of the Armed Forces of Ukraine, continues to spread fakes and disinformation.

According to the available information, Ukrainian nationalists continue the targeted destruction of ships in the port of Mariupol. After the arson of the Turkish ship “Azburg” operating under the Dominican flag, Ukrainian militants carried out another provocation. The craftsmen of 83 CIPsO and the nationalists of “Azov” set fire to the control ship “Donbass”. Currently, a fire is continuing onboard both vessels, and smoke is observed. We do not exclude that in the near future, Ukrainian and foreign media will begin to distribute videos with the killed crew members of ships to discredit the Russian military.”