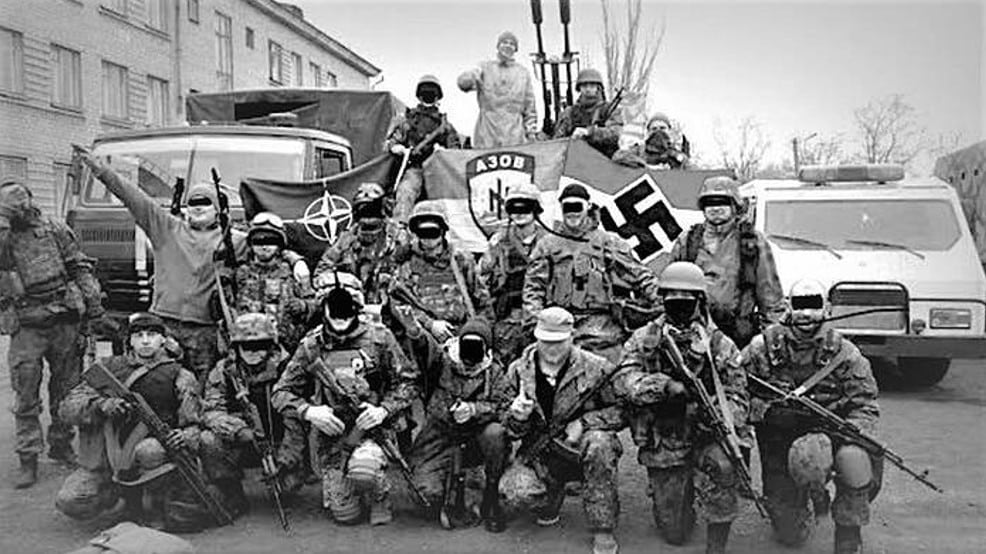 Anderweltonline.com – Germany, Europe is dependent on energy from Russia. But the current events around Ukraine show that Germany’s industry has also become dependent on Ukraine. All of this is intertwined with oligarchs in the East and West. For them, Ukraine is a lawless space.

One of President Putin’s first acts in office was to take the oligarchs in Russia by the scruff of the neck. He had them sign a pledge to refrain from political activities and to abide by the law. In return, they were allowed to keep their ill-gotten fortunes. All of them complied with this, except Khodorkovsky. Many of the oligarchs then took up residence abroad, especially in Great Britain. From then on, Russia went uphill.

Ukraine failed to carry out an analogous process. Thus, Ukraine is dominated by oligarchs who operate more or less outside any legality. I note at this point that all the oligarchs in the former Soviet area are Jews and so also hold Israeli passports. After 1990, many Jews from Russia came to Berlin and for a long time, they lived there knowing that Berlin was also a lawless space for them. They assumed that no one would dare to try them as Jews in Germany. That has slowly changed, but the Gil Ofarim case, in particular, has shown what arrogance some of them still reflect on their “Judenbonus” in Germany.

Masses of weapons were moved from Ukraine to Africa

Ukraine is not only corrupt, it is a huge money-laundering machine. Billions are shuffled in, then shuffled back and forth. Just think of Hunter Biden, the son of the current U.S. President and former Vice President, who received $50,000.00 a month as a “salary” for a job he is nowhere near qualified to do and probably never did seriously. But these are small fry. With Ukraine’s independence, weapons were moved from there, primarily to Africa, to burgeoning conflict regions. Weapons from former Soviet stocks were delivered en masse to anyone who could pay. During the last few years, weapons from Western production have also found their way via Ukraine to African crisis regions. Read the exciting stories of Florian Stumfall, a high-ranking member of the CSU who has traveled extensively in Africa and is a true Africa expert.

Anyone who knows just a little about the international arms trade knows that none of the payment flows go through traceable channels. It cannot be ruled out, for example, that Igor Kolomoisky raked in his billions in this way. The Kolomoisky who is also in charge of the Azov brigades, which proudly pose decorated with Nazi symbols and murderously terrorize especially the people of Donbass. (Picture below) Selenskji himself has said on U.S. television that he has now integrated them into his regular armed forces. Who can be surprised, when currently atrocities are reported, which of course are blamed on Russian soldiers? Thus, Azov brigades are also hiding behind civilians in Mariupol and other cities, taking up positions in residential buildings and hospitals in order to fire from there.

Ukraine is a low-wage country, cheaper than anything else in Europe. If you look at the data from Ukraine itself, it becomes clear how desolate this country is. The average salary is 76 € per month, although there should be an official minimum wage of 295.58 €. A bricklayer receives €233.18 and a dentist €1,014.60. So it’s no wonder that German corporations have also relocated parts of their production there. In doing so, however, they have made themselves just as dependent on Ukraine as we are on Russian energy. And so it is not surprising that the Ukrainian language is widely spoken on German construction sites. At this point, I note that hardly anything could be moved on German construction sites without the workers from all over Eastern Europe. What should we do if they leave the country because they are paid decently at home? Precisely if Ukraine were brought to the level to which Putin has brought Russia.

One thing should be clear: Where oligarchs rule, the middle class disappears and the very bottom is exploited – to the hilt. Yes, this is also true in the West, if you look at the developments of the last few years. And here, too, it is the rulers over the money who have made politicians compliant and turned the market economy into buyers’ cartels. In this way, they have also succeeded in establishing the largest low-wage sector of all Western European countries in Germany. But this is not enough for the greedy, as long as it is possible to produce even cheaper in Ukraine and also to disguise payment flows and thus evade taxes. It would have been the task of the West to help its protégé Ukraine on its way and to finally create order. But they would have had to take on the Ukrainian oligarchs and their connections to Israel.

I was really amused, however, when it was said that Putin would be hit with the sanctions against Russian oligarchs. He can hardly hold his stomach from laughing when the West now completes what it did not dare to do with “its” oligarchs. And again one has to notice that Germany of all countries has the biggest problems in enforcing the sanctions against oligarchs. I wonder if this is still somewhat due to the fact that they are Jews. That their dealings in Germany with opaque constructs have not been looked at so closely because of that? In Germany there is still an “argument”: Do you want to make a pogrom? One thinks only of the Mr. Bubis and his black buildings in Frankfurt-Sachsenhausen.

When the oligarchs are ousted, a middle class can be established

One thing should be known: None of the oligarchs in the former Soviet territories could have become one without the support of their co-religionists in the West. But they do not make “investments” without an appropriate return. This can be money or power and influence. Putin has finished the part with power and influence in Russia. Probably that’s why they hate him. He simply took the mega-money machine away from them. In Ukraine, however, it is still running at full speed. Until now. With the operation in Ukraine, Putin is now preparing to break the power of the oligarchs there as well. The Western oligarchs have a grip on almost all governments – except Hungary, where Orban has kicked out the Soros organizations.

After the last election in Hungary, it shows what happens when the oligarchs are taken out of control, especially control over the media. Awakened citizens remember their nationality and turn away from the globalism of the oligarchs. The Russian operation in Ukraine increases the likelihood that the oligarchs there will be stripped of their power as well. As we have observed in Russia after the oligarchs were deprived of their power, a middle class was allowed to establish itself there and people regained hope for a better future. This process does not yet exist in Ukraine. On the contrary, the division of the population into the bitterly poor and the rich is becoming more and more advanced. This trend can be observed in all countries where oligarchs pull the strings. And yes, this also applies to Germany.

The oligarchs dominate the media in the value West. They fear that control over Ukraine could slip away from them. But they fear even more than their crimes in and against Ukraine will be exposed, as is already evident with Hunter Biden’s laptop. This explains the barrage of propaganda fired against Russia by the media they control. They want to prevent by all means the lucrative playground Ukraine is lost to them. I don’t want to exclude the possibility that they are also taking revenge on Putin, who has taken away their playground Russia. Perhaps they already see the danger to their power base when the power of the U.S. dollar dwindles.

Ukraine is a powder keg, divided into East and West

The oligarchs control the West “only” with the media and elaborate lobbying. In Ukraine, however, they own the government, they are the government, and they do whatever they want there. At the same time, they make sure that their goings-on in Kiev are not publicized through Western media. But what if they lose their power over Kiev? Then they will have to painstakingly build another state through which they can launder their dirty money, and that can take time. In the worst case, they will have to seek their salvation in fleeing to Israel, but there is no “Jew bonus” there.

Ukraine itself is a powder keg, divided between East and West. The media and the government in Kiev are doing everything to ensure that nothing changes. Oligarch power needs unstable conditions and as soon as the hostile parts of Ukraine are separated by a border, there is a “danger” that two stable entities will emerge and the oligarchs do not want that at all. They love the unstable status quo, i.e. Ukraine as it is, and they want to preserve it and, of course, permanently damage their arch-enemy Putin, who has broken their power in Russia.

You can order your copy of “Tripoli Charlie” directly from the publisher here or purchase it at your local bookstore.

Once again I point to the thorough work of Röper, who has exposed the big lie about Butscha as such: Warum die Meldungen über angebliche russische Kriegsverbrechen in Butscha eine Lüge sind