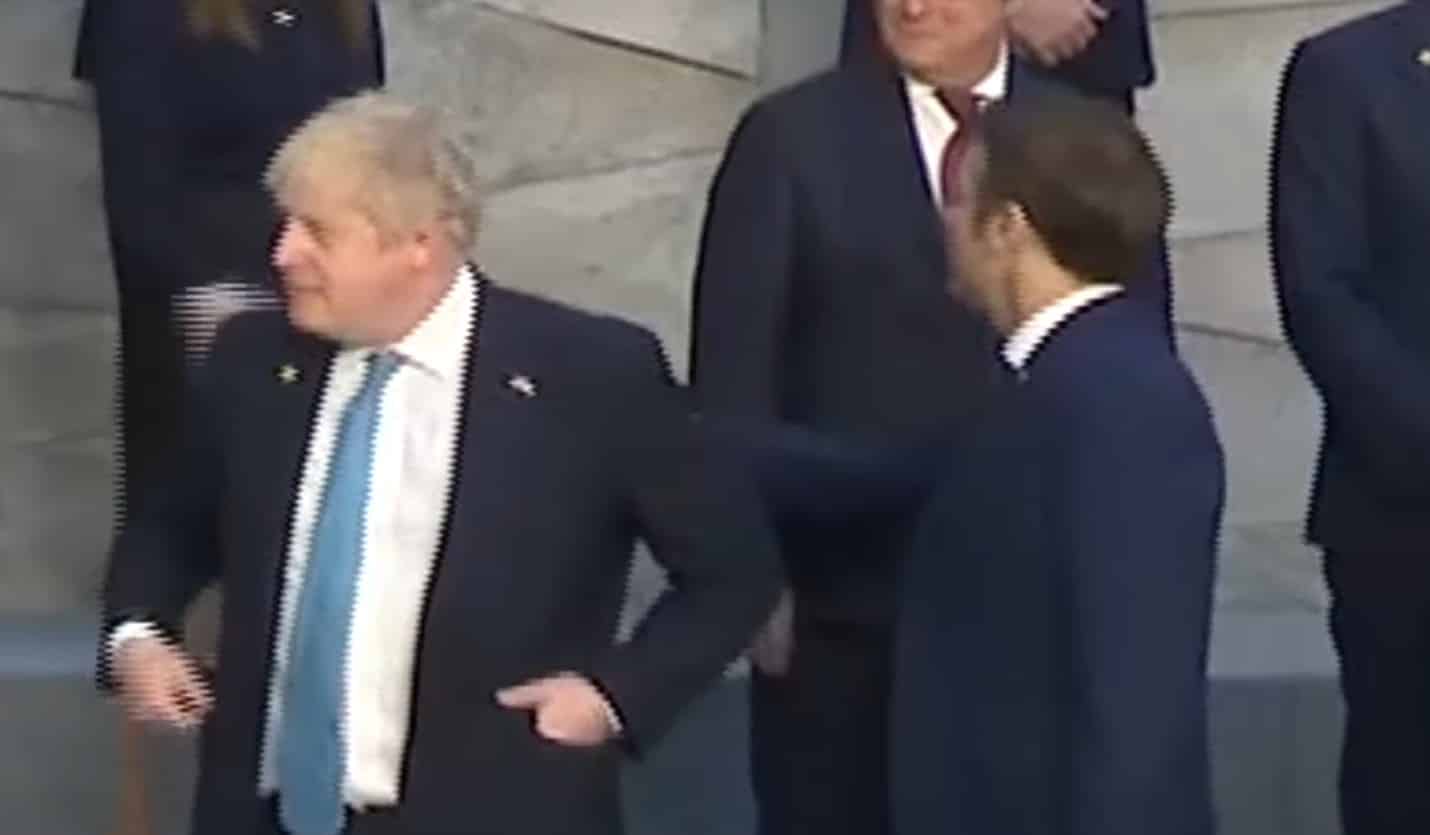 TheSaker.is – The stunning spectacle of the EU committing slow-motion hara-kiri is something for the ages. Like a cheap Kurosawa remake, the movie is actually about the Empire of Lies-detonated demolition of the EU, complete with the subsequent rerouting of some key Russian commodities exports to the US at the expense of the Europeans.

It helps to have a 5th columnist actress strategically placed, in this case astonishingly incompetent European Commission head Ursula von der Lugen, with a brand new vociferous announcement of an extra sanctions package: Russian ships banned from EU ports; road transportation companies from Russia and Belarus prohibited from entering the EU; no more coal imports (over 4.4 billion euros a year).

That translates in practice into the Empire of Lies shaking down its wealthiest – Western – clients/puppets. Russia of course is too powerful militarily. The Empire badly needs some of its key exports – especially minerals. Mission Accomplished, in this case, amounts to nudging the EU into imposing more and more sanctions and willfully collapsing their national economies, allowing the US to scoop everything up.

Cue to the coming catastrophic economic consequences felt by Europeans in their daily life (but not by the wealthiest 5%): inflation devouring salaries and savings; next winter energy bills packing a mean punch; products disappearing from supermarkets; holiday bookings almost frozen; Le Petit Roi Macron in France – may be up to a nasty electoral surprise – announcing “food stamps like in WWII are possible”.

We have Germany facing the returning ghost of Weimar hyperinflation; BlackRock President Rob Kapito saying, in Texas, “for the first time, this generation is going to go into a store and not be able to get what they want”; farmers in Africa not able to afford fertilizer at all this year, reducing agricultural production by an amount capable of feeding 100 million people.

Zoltan Poszar, former NY Fed and US Treasury guru, current Credit Suisse grand-vizir, has been on a streak, stressing how commodity reserves – and here Russia is unrivaled – will be an essential feature of what he calls Bretton Woods III (yet, in fact, what’s being designed by Russia, China, Iran, and the Eurasia Economic Union is a post-Bretton Woods).

Pozar remarks that wars, historically, are won by those who have more food and energy supplies, in the past to power horses and soldiers, today to feed soldiers and fuel tanks and fighter jets.

China, incidentally, has amassed large stocks of virtually everything.

Pozar notes how our current Bretton Woods II system has a deflationary impulse (globalization, open trade, just-in-time supply chains) while Bretton Woods III will provide an inflationary impulse (de-globalization, autarky, hoarding of raw materials) of supply chains and extra military spending to be able to protect what will remain of seaborne trade.

The implications are of course overwhelming. What’s implicit, ominously, is that this state of affairs may even lead to WWIII.

The Valdai Club has conducted an essential expert discussion on what we at The Cradle have defined as Rublegas – the real geoeconomic game-changer at the heart of the postpetrodollar era. Alexander Losev, a member of the Russian Council for Foreign and Defense Policy, offered the contours of the Big Picture. But it was up to Alexey Gromov, Chief Energy Director of the Institute of Energy and Finance, to come up with crucial nitty-gritty details.

Russia so far was selling gas to Europe to the amount of 155 billion cubic meters a year.

The EU rhetorically promises to get rid of it by 2027, and reduce supply by the end of 2022 by 100 billion cubic meters. Gromov asked “how”, and remarked, “any expert has no answer. Most of Russia’s natural gas is shipped over pipelines. This cannot simply be replaced by LNG.”

The risible European answer has been “start saving”, as in “prepare to be worse off. Reduce the temperature in households”. Gromov noted how, in Russia, “22 to 25 degrees in winter is the norm. Europe is promoting 16 degrees as ‘healthy’, and wearing sweaters at night.”

The EU won’t be able to get the gas it needs from Norway or Algeria (which is privileging domestic consumption). Azerbaijan would be able to provide at best 10 billion cubic meters a year, but “that will take 2 or 3 years” to happen.

Gromov stressed how “there’s no surplus in the market today for US and Qatar LNG.” And how prices for Asian customers are always higher. The bottom line is that “by end of 2022, Europe won’t be able to significantly reduce” what it buys from Russia: “they might cut by 50 billion cubic meters, maximum.” And prices in the spot market will be higher – at least $1,300 per cubic meter.

An important development is that “Russia changed the logistical supply chains to Asia already”. That applies to gas and oil as well:

“You can impose sanctions if there’s a surplus in the market. Now there’s a shortage of at least 1.5 million barrels of oil a day. We’ll be sending our supplies to Asia – with a discount.” As it stands, Asia is already paying a premium, from 3 to 5 dollars more per barrel of oil.

On oil shipments, Gromov also commented on the key issue of insurance: “Insurance premiums are higher. Before Ukraine, it was all based on the FOB system. Now buyers are saying ‘we don’t want to take the risk of taking your cargo to our ports’. So they are applying the CIF system, where the seller has to ensure and transport the cargo. That of course impacts revenues.”

An absolutely key issue for Russia is how to make the transition to China as its key gas customer. It’s all about Power of Siberia 2 – which will reach full capacity only in 2024. And first, the interconnector through Mongolia must be built – “we need 3 years to build this pipeline” – so everything will be in place only around 2025.

On the Yamal pipeline, “most of the gas goes to Asia. If the Europeans don’t buy anymore we can redirect.” And then there’s the Arctic LNG 2 – which is larger than Yamal: “the first phase should be finished soon, it’s 80% ready.” An extra problem may be posed by the Russian “Unfriendlies” in Asia: Japan and South Korea. LNG infrastructure produced in Russia still depends on foreign technologies.

That’s what leads Gromov to note that, “the model of mobilization- based economy is not so good.” But that’s what Russia needs to deal with at least in the short to medium term.

The positives are that the new paradigm will allow “more cooperation within the BRICS”; the expansion of the International North-South Transportation Corridor (INSTC); and more interaction and integration with “Pakistan, India, Afghanistan and Iran”.

Only in terms of Iran and Russia, swaps in the Caspian are already in the works, as Iran produces more than it needs, and is set to increase cooperation with Russia in the framework of the strenghtened strategic partnership.

It was up to Chinese energy expert Fu Chengyu to offer a concise explanation of why the EU drive of replacing Russian gas with American LNG is, well, a pipe dream. Essentially the US offer is “too limited and too costly”.

“Each contract”, he pointed out, “takes a long time to finish. Without all these signed contracts no party will invest – be it an investment on infrastructure or gas field development.” So actual delivery of American LNG to Europe assumes all these interconnected resources are available – and moving like clockwork.

Fu Chengyu’s verdict is stark: this EU obsession with ditching Russian gas will provoke “an impact on global economic growth, and recession. They are pushing their own people – and the world. In the energy sector, we will all be harmed.”

It was quite enlightening to juxtapose the coming geoeconomic turbulence – the EU obsession in bypassing Russian gas and the onset of Rublegas – with the real reasons behind Operation Z in Ukraine, completely obscured by Western media psyops.

So I submitted a few questions to a US Deep State old pro, now retired, and quite familiar with the inner workings of the old OSS, the CIA precursor, all the way to the neocon dementia.

His answers were quite sobering. He started by pointing out, “the whole Ukraine issue is over hypersonic missiles that can reach Moscow in less than four minutes. The US wants them there, in Poland, Romania, Baltic States, Sweden, Finland. This is in direct violation of the agreements in 1991 that NATO will not expand in Eastern Europe. The US does not have hypersonic missiles now but should – in a year or two. This is an existential threat to Russia. So they had to go into the Ukraine to stop this.  Next will be Poland and Romania where launchers have been built in Romania and are being built in Poland.”

From a completely different geopolitical perspective, what’s really telling is that his analysis happens to dovetail with Zoltan Poszar’s geoeconomics: “The US and NATO are totally belligerent. This presents a real danger to Russia. The idea that nuclear war is unthinkable is a myth. If you look at the firebombing of Tokyo against Hiroshima and Nagasaki, more people died in Tokyo than in Hiroshima and Nagasaki. These cities were rebuilt. The radiation goes away and life can restart. The difference between firebombing and nuclear bombing is only efficiency. NATO provocations are so extreme Russia had to place their nuclear missiles on standby alert. This is a gravely serious matter. But the US ignored it.”