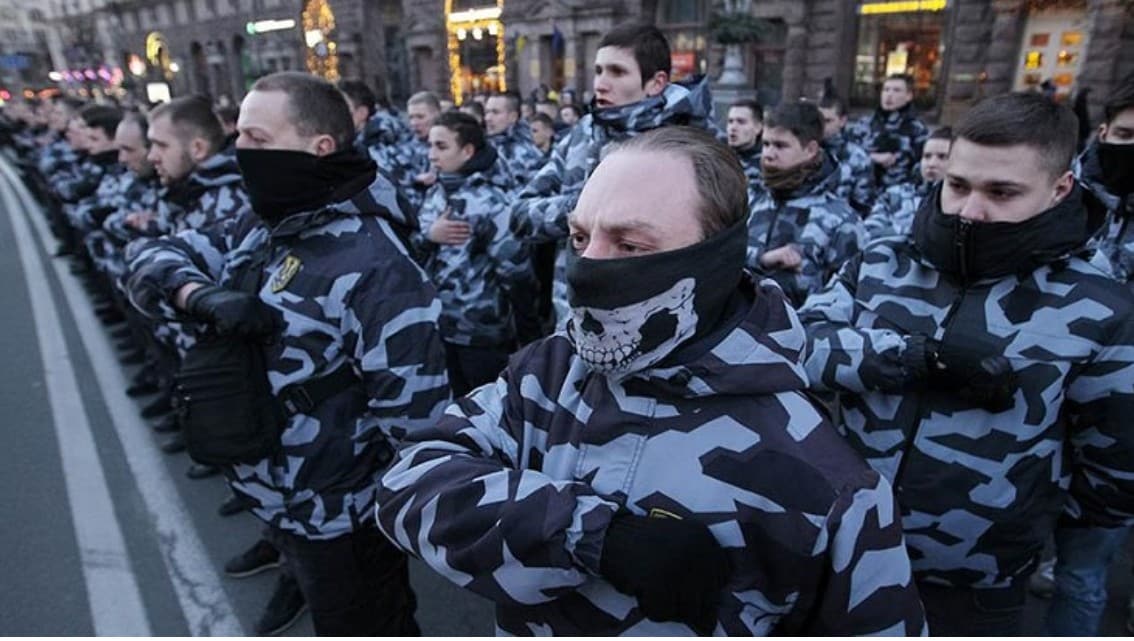 NEO – Self-proclaimed political scientists give us definitions of Naziism. A real definition is quite different and easily discerned as accurate.

Naziism: A falsely deemed “political movement” typically organized and controlled by criminal elites. Naziism is based on black propaganda formulas that exploit ethnic, racial, and class hatreds to weaponize population sectors that are conditioned by broad control of media employed to induce generalized fear. (author)

Here in the US, the government is, after years of blissful ignorance, beginning to recognize the fundamental threat of Naziism and its incompatibility with elected governments and personal freedoms.

Naziism, as practiced, is a cult that attracts the ignorant, the fearful, and the hate-filled. In order to support the growth of Naziism, for reasons we will look into, certain governments, the US and most NATO allies, but others as well such as Brazil, have built their foreign policies around support for generalized injustice.

The Ukraine War has brought about a reassessment of the war on Yugoslavia for sure. NATO destroys Yugoslavia then spends two decades destroying the radical Islamists it destroyed Syria to save.

But the real issue is the love affair Democratic President Joseph Biden has for Nazis in Ukraine while defending his administration from Azov affiliated organizations inside the US.

Some say Biden is suffering from dementia but the most likely diagnosis is schizophrenia. From NATO funded Bellingcat, dated February 2019:

Newly uncovered evidence going back to 2015 suggests that the Ukrainian white nationalist Azov movement has been systematically co-opting American right-wing extremists to advance the former’s own international agenda. In audio statements uncovered by Bellingcat, this agenda was summarized by the International Secretary of the political wing of Azov, the National Corps, as a “world conservative revolution,” aimed to “defend the white race.” These new findings are separate from the recently reported ties between Azov and American violent neo-Nazi group the Rise Above Movement, and members of the American alt-right.

In October 2018, an FBI criminal complaint unsealed in connection with the arrest of members of the violent neo-Nazi group Rise Above Movement (RAM) pointed to said group’s contacts in Ukraine. Members of RAM who were charged in the US in connection with violence at political rallies, including in Charlottesville, traveled to Ukraine in 2018 to meet key figures of the Azov movement.

Mind you, these groups that were trained by Israeli Mossad and supplied by the US and UK with the best in military technology have, for years, trained domestic terror organizations in the US and Europe including those that attacked the US government on January 6, 2021.

More schizophrenia, as America’s powerful Jewish lobby, is fully behind Nazi efforts in Ukraine and finances American Nazi groups with endless millions in “laundered” Bitcoin while bashing the same groups they pour money into as “anti-Semitic.”

Stranger still, the same groups are also working closely with America’s oil companies to keep oil supplies down and soaring profits through the roof.

It doesn’t take much of an imagination to note that something is certainly going on behind the scenes. If one were to accept Russia’s point that their move into Ukraine was necessitated by Biden’s hardline statements about bringing Ukraine into “Nuclear NATO,” then one might begin to ask if this war, one Russia claims was engineered in Washington, may well not be the product of a marriage between right-wing extremists and Nazi’s who are now powerful in the US and the oil lobby.

One might also see a role for Saudi Arabia here as well as one for Israel, a nation busy arming nations like Azerbaijan, Turkey and, of course, the Ukrainian Nazi militias.

This makes the Ukraine War one engineered by global organized crime to manipulate markets, sell arms and destabilize Western Europe with refugees in order to push forward right-wing extremism across Europe and North America, and this means Canada as well.

Reports received out of Mariupol have demonstrated advanced training in battlefield electronics and guerilla warfare. Then other questions are asked, from Vox.com 2015:

It’s never good news for the rule of law when an oligarch sends armed men in combat fatigues to occupy a state-owned oil company. That’s what just happened in Ukraine, where billionaire Ukrainian/Israeli oligarch Igor Kolomoisky appears to have sent members of his private army last week to temporarily take over the offices of oil companies UkrTransNafta in order to protect his financial interests in the company.

The situation may be even more frightening than it sounds.

Kolomoisky funds and directs a large private militia that has been helping the Kiev government fight against the pro-Russian separatists in eastern Ukraine. Militias like his — and there are dozens of them — are a source of deep concern to analysts who believe they could threaten Ukraine’s long-term stability.

Are these private armies willing to follow Kiev’s orders without question? Or will they go their own way when their own interests are at stake? Kolomoisky’s antics at the oil company’s offices, in which he appears to have used his private army to protect his personal financial interests, look an awful lot like the latter.

Bands of thugs that became armies

Kolomoisky, an oligarch who is also the governor of Ukraine’s Dnipropetrovsk region, is a significant backer of the pro-Kiev private militias fighting in the country’s east. He funds the Dnipro Battalion, a private army that, according to the Wall Street Journal, has 2,000 battle-ready fighters and another 20,000 in reserve. Newsweek reported that Kolomoisky has funded other militia groups, as well as Azov.

For those unaware, it was Koloimoisky that employed Zelenskyy as a “comedian” and later groomed the budding Miami Beach oligarch, and we are speaking of Zelenskyy, for his role as wartime leader as well.

There is a term “strange bedfellows,” possibly Shakespearian in origin (The Tempest 2:2) continually comes to mind when we examine 21st century Nazis and their supporters.

In America, all Nazis are from the Republican Party, the party of Christian Zionism and “Big Business.”

After all, weren’t America’s rural Christians and their friends in “big business” behind Hitler, not only before World War 2 but during as well?

How many remember Hitler as Time Magazine’s “Man of the Year” in 1940?

Hitlerism, to rural Americans, later to be grouped under the term “Christian Evangelists” represented eugenics, breeding a master race of Anglo-Saxon whites while sterilizing or even killing others, Native Americans, African Americans, Jews, Hispanics, Catholics, Gypsies/Roma, and Slavs.

Today, it’s Jews and “liberals,” with a continued focus on African Americans and now Muslims as well. The fear that immigrants will storm in and take those jobs, killing cattle with hammers or shoveling manure, drives millions of Americans into the hands of right-wing causes, all of whom now openly espouse Third Reich values.

Behind it all, dating back to the late 19th century, a core of American oligarchs, Schiff, Morgan, Harriman, Bush, Rockefeller, Koch, Dupont, so many more, orchestrated the growth of Naziism in Germany and sought to manage Hitler.