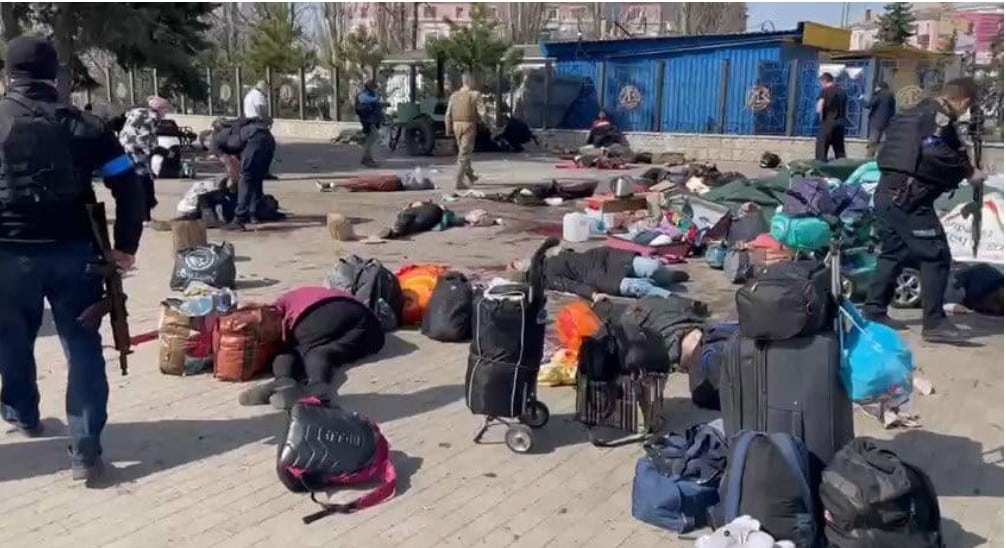 SouthFront: The Russian Ministry of Defence commented on the attack of the AFU on civilians in Kramatorsk, denying all Kiev’s accusations against Russian forces. Here are some details shared by the Russian MoD:

” In order to accuse Russia of an alleged missile strike on the Kramatorsk railway station, the Kiev regime has shared photos of the Tochka-U launchers that took part in the Russian-Belarusian exercise “Allied Resolve-2022” in February 2022 on social networks. Pay your attention that all photos published by Kiev of the exercises “Allied Resolve-2022” do not depict Russian missile systems.

According to updated data, the attack on the Kramatorsk railway station was carried out by a missile division of the Ukrainian armed forces from the area of the settlement of Dobropillya 45 kilometers southwest of the city.

The aim of the Kiev regime’s strike on the station in Kramatorsk was to disrupt the mass departure of residents from the city in order to use them as a “human shield” to defend the positions of the Armed Forces of Ukraine, as in many other settlements of Ukraine.

In his turn, DPR Representative Basurin claimed that during the attack on Kramatorsk, the Ukrainian military used a Tochka-U missile equipped with a cluster warhead, about 30 people were killed, and about 100 were injured.

UPDATED: Another video was shared from the spot. In the video, a woman is crying that there were a lot of children killed.

On April 8, a Ukrainian Tochka-U missile hit the railway station in the city of Kramatorsk. As a result, there are civilian casualties.

According to preliminary data, about 30 civilians were killed and about 100 other were wounded.

Judging by the footage civilians were preparing for evacuation from the city. On the debris of the rocket, it is written: “(vengeance) For the children”.

Ukraine immediately claimed that the attack was carried out by Russian forces with an Iskander missile with a cluster warhead.

Footage shared from the spot revealed that the strike was carried out with a “Tochka-U” missile which is used only by the AFU.

The Kiev authorities are already lost in their claims. While notorious Mr. Arestovich and Mr. Kirilenko claimed that it was the Russian Iskander missile, President Zelensky then changed his mind and clarified that this was not Iskander, but Tochka-U missile, only the Russian one. Photo No. 1 Rocket of the Tochka U complex, which is in service with Ukraine
Photo No.2 Fragments of a rocket that fell in Kramatorsk.
Photo No. 3 Rocket of the Iskander complex. Meanwhile, the MSM is already spreading claims about the Russian Iskander missile, blaming Russian forces for another fake massacre of civilians.

The city of Kramatorsk remains under the AFU control. Such a provocation by the Ukrainian side has a number of reasons profitable for the nazi regime in Kiev. The population of Donbass, including Slavyansk and Kramatorsk, is considered disloyal by the AFU, so they can easily be sacrificed. Another media scandal against Russian forces is aimed to pity western allies of the Kiev regime and increase the military supplies to the AFU, as well as assure the European countries that more sanctions are necessary to be imposed against the “cruel” Russian population, despite the fact that these sanctions hurt the population of European countries.

This is not the first case of the AFU strikes on civilians in the Donbass region which deliberately targeted crowds of civilians.

On the morning of March 14, around 11:20 a.m. local time, Ukrainian units struck the center of Donetsk with a Tochka-U tactical missile equipped with cluster munitions. Dozens were killed. The strike targeted the center of the city, where there is no military infrastructure or equipment. Civilians were deliberately chosen as targets. The nationalist units of the Kiev regime, using cluster munitions, sought to hit as many of the city’s inhabitants in the central part of the city as possible.

Dozens of Ukrainian Tochka-U missiles are targeting cities and nearby areas that are under the DPR and LPR control on a daily basis. However, these cases are silenced by the MSM.

Today’s massacre of civilians in Kramatorsk is not an accident, but another case of war crime carried out by the Kiev regime against the population.