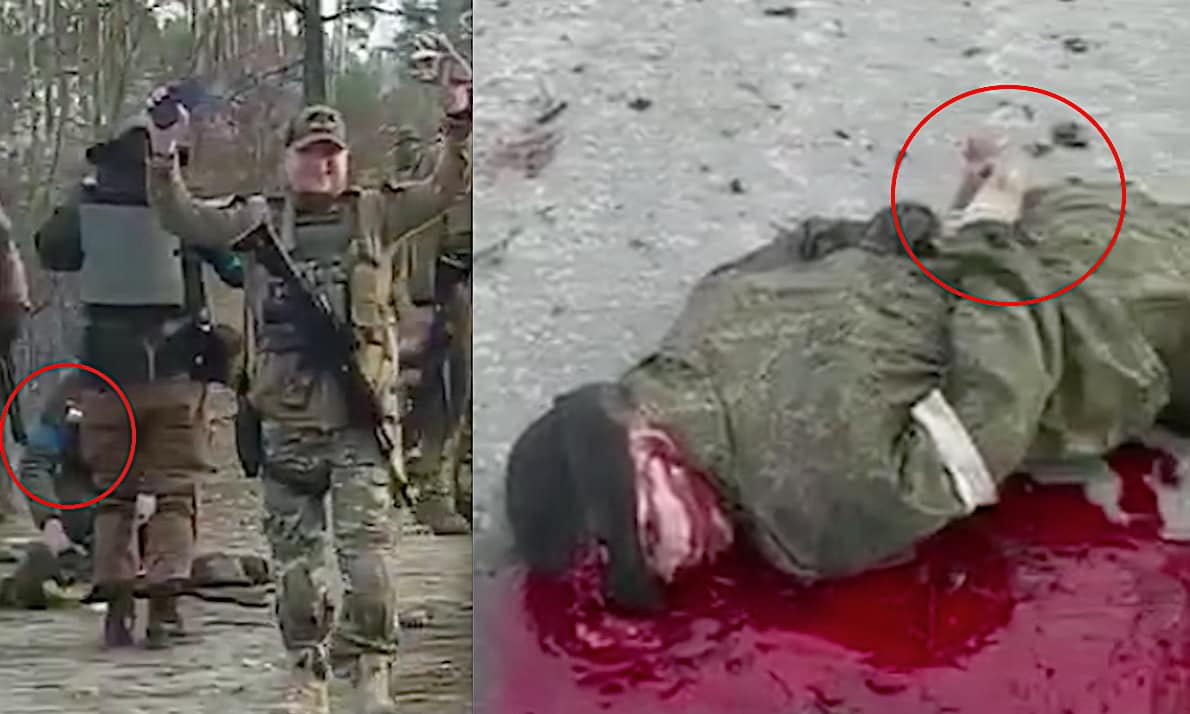 The video is so graphic that RT is unable to share it reports Russia Today out of respect for the military compatriots killed in a brutal execution.

Gospa News believes to share the video (link below) and publish some images confirming the inhuman atrocity of seeing human-like beings celebrating after having bound and killed one of their enemies with a blow in the forehead, in clear violation of any convention on protection. of prisoners of war.

The shocking video, suitable only for those who are not impressionable, serves to demonstrate how false the narrative of the European Union is that it offers media protection to the pro-Nazi regime in Kiev, provides it with weapons, and censors the Russian media.

«A video posted online on Monday and verified by The New York Times appears to show a group of Ukrainian soldiers killing captured Russian troops outside a village west of Kyiv writes NYT, in one of the latest articles on the Ukrainian War page.

“He’s still alive. Film these marauders. Look, he’s still alive. He’s gasping,” a man says as a Russian soldier with a jacket pulled over his head, apparently wounded, is seen still breathing. A soldier then shoots the man twice. After the man keeps moving, the soldier shoots him again, and he stops.

At least three other apparent Russian soldiers, including one with an obvious head wound who has his hands tied behind his back, can be seen dead near the victim. All are wearing camouflage, and three have white armbands commonly worn by Russian troops. Equipment is scattered around them and there are bloodstains near each man’s head» added New York Times.

The soldiers are lying on the road a few feet from a BMD-2, an infantry fighting vehicle used by Russian airborne units. Some appear to have had their jackets, shoes, or helmets removed. Farther up the road, other destroyed vehicles can be seen.

The video was filmed on a road just north of the village of Dmytrivka, around seven miles southwest of Bucha, where the discovery of hundreds of corpses of people in civilian clothes in recent days has prompted accusations that Russian troops killed civilians as they retreated.

The killings appear to have been the result of a Ukrainian ambush of a Russian column that occurred on or around March 30, as Russian troops were withdrawing from small towns west of Kyiv that have been the scene of fierce fighting for weeks. Oz Katerji, a freelance journalist, posted videos and pictures of the destroyed column on Twitter on April 2 and wrote that soldiers told him that the Russians had been ambushed 48 hours earlier.

This chilling and unequivocal evidence surfaces as the European Commission is evaluating a new package of sanctions against Russia for the alleged Bucha massacre on which Brussels has already issued its sentence without even hearing the official version of Russia that denies all accusations.

Italian MEP Francesca Donato asked for investigators to be sent to shed light on the incident but was interrupted and silenced by the vice president of the European Parliament Pina Picierno who called a discussion on what happened in the city of the Kiev region “unacceptable”.

However, many mysteries remain open in the story of Bucha. The video of the dead on the street was shot by the Ukrainian police and not by an independent person. In an image, a corpse is seen rising from the rearview mirror of a car.

And the Russian ambassador to the UN, Vasily Nebenzia, highlighted a macroscopic proof: the Moscow army withdrew on March 31 and the next day the Mayor of the city made a video in which he smiles for liberation without the slightest mention of the dead left on the street.

While the video that portrays a Russian soldier tied up and killed with a blow to the forehead was made by the Ukrainians themselves to celebrate the murder of prisoners. The blue ribbon on the arm of some soldiers confirms their membership in the Kiev army and therefore represents unequivocal proof of a heinous war crime. Despite so, European Union and Italy to are supplying Ukrainian soldiers with weapons.

The video starts with the apparent murder of a severely wounded Russian serviceman, who was lying on a road. “Look, he’s still alive. He’s wheezing,” a voice said off-screen before shots were fired at the defenseless soldier.

It then shows the bodies of several more Russians, scattered on the ground nearby in puddles of blood, as armed men with Ukrainian military insignia on their uniforms cheer as they walk among them.

At least one of the prisoners of war in the footage has his hands tied behind his back and was apparently executed with a shot to the head at point-blank range. Some media outlets suggested that other soldiers may have had their throats slit.

The Ukrainian troops in the video are seen shouting “Glory to Ukraine! Glory to Heroes!” – a slogan belonging to World War Two Nazi collaborators which have been adopted by the country’s military – and discussing what gear they could loot from the corpses.

Ukraine’s Defense Ministry also tweeted about the destruction of the Russian convoy, calling it “precise work” by Ukrainian forces. “These are not even humans,” a Ukrainian soldier says in the video as he walks among the wrecked vehicles, adding that two Russian lieutenants had been taken, prisoner.

The Ukrainian soldiers are identifiable by their flag patches and blue armbands and repeat “glory to Ukraine” multiple times. Their unit is unclear, but in the video of the killing, one of the men refers to some of them as “Belgravia lads,” likely referring to a housing development called Belgravia located a few hundred yards from the incident.

A Ukrainian news agency noted that the ambush was conducted by the “Georgian Legion” – a unit of Georgian volunteers that was formed back in 2014. A member of the Legion appears to look like former Georgian President Mikheil Saakashvili’s security guard, the article’s author Evan Hill said via Twitter.

We should recall the Maidan Square massacre on February, 20. 2014, before the coup in Kiev against pro-Russian President Viktor Yanukovych, was likely caused by the shooting of Georgian mercenary snipers.

The location and date on which the clip was recorded are currently unclear. But Russian media said it may have been filmed in the same area outside Kiev as a video published by the UNIAN news agency on March 30. This footage didn’t show the execution of POWs but apparently featured at least one of the same Ukrainian fighters and the same seized Russian armored vehicle.

Russia’s Investigative Committee has launched a criminal case, with experts being tasked with establishing the circumstances of the incident, its date, and location, as well the identities of the Ukrainian troops who feature in it.

“The servicemen of the Ukrainian Armed Forces and other Ukrainian armed units have committed a harsh violation of the Geneva Convention on Prisoners of War,” the agency insisted.