The Power Elite is a 1956 book by sociologist C. Wright Mills, in which Mills calls attention to the interwoven interests of the leaders of the military, corporate, and political elements of society and suggests that the ordinary citizen is a relatively powerless subject of manipulation by those entities.

The book is something of a counterpart of Mills’ 1951 work, White Collar: The American Middle Classes, which examines the then-growing role of middle managers in American society. A main inspiration for the book was Franz Leopold Neumann’s book Behemoth: The Structure and Practice of National Socialism in 1942, a study of how Nazism came into a position of power in a democratic state like Germany. Behemoth had a major impact on Mills.

According to Mills, the eponymous “power elite” are those that occupy the dominant positions, in the dominant institutions (military, economic and political) of a dominant country. Their decisions (or lack thereof) have enormous consequences, not only for the Americans but, “the underlying populations of the world.” The institutions which they head, Mills posits, are a triumvirate of groups that have succeeded weaker predecessors:

Importantly, and as distinct from modern American conspiracy theory, Mills explains that the elite themselves may not be aware of their status as an elite, noting that “often they are uncertain about their roles” and “without conscious effort, they absorb the aspiration to be… The Ones Who Decide.” Nonetheless, he sees them as a quasi-hereditary caste. The members of the power elite, according to Mills, often enter into positions of societal prominence through education obtained at eastern establishment universities like Harvard, Princeton, and Yale. But, Mills notes, “Harvard or Yale or Princeton is not enough… the point is not Harvard, but which Harvard?” 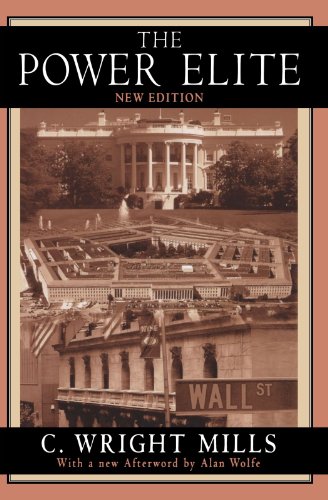 Mills identifies two classes of Ivy League alumni, those who were initiated into an upper-echelon fraternity such as the Harvard College social clubs of Porcellian or Fly Club, and those who were not. Those so initiated, Mills continues, receive their invitations based on social links first established in elite private preparatory academies, where they were enrolled as part of family traditions and family connections. In this manner, the mantle of the elite is generally passed down along familial lines over the generations.

The resulting elites, who control the three dominant institutions (military, economy, and political system) can be generally grouped into one of six types, according to Mills:

Commenting on The Power Elite, Arthur M. Schlesinger, Jr. derisively said, “I look forward to the time when Mr. Mills hands back his prophet’s robes and settles down to being a sociologist again.”

Nonetheless, consideration of the book has become moderately more favorable over time. In 2006, G. William Domhoff wrote, “Mills looks even better than he did 50 years ago”. Mills’ biographer, John Summers, admitted that The Power Elite was “vulnerable to the charge of conspiracy-mongering” but declared that its historical value “seems assured”.